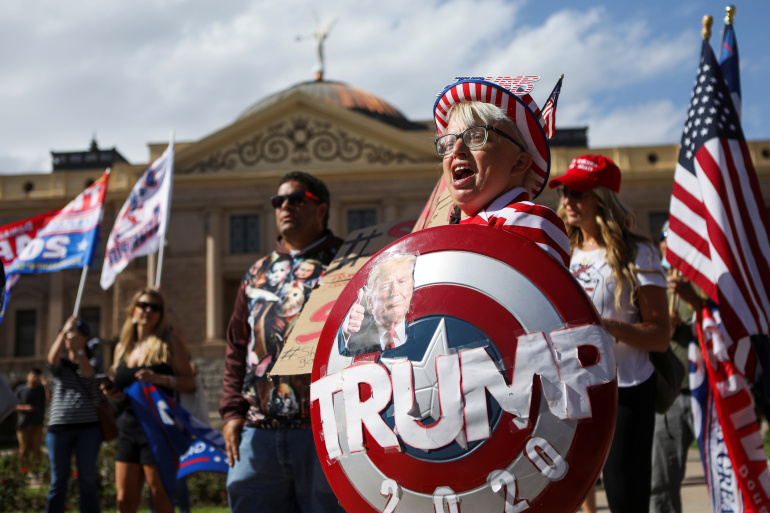 #StopTheSteal organizers and activists are calling for all patriots to head to Arizona for a series of rallies over the weekend and a public hearing with President Donald Trump’s campaign lawyers on Monday.

Arizona legislators and lawyers for President Trump will be holding a meeting at the Hyatt Regency Phoenix on Monday at 9 a.m.

The Arizona Secretary of State is expected to certify the results for Joe Biden on Monday, despite major anomalies and allegations of fraud throughout the state, but particularly in Maricopa County.

“After a review of the statistical anomalies, and there are to numbers to count [sic], affidavits of improper actions and community outrage that has grown out of what appears to voters to be an attempt to throw the election through a number of fraudulent efforts, we decided as Members of the Legislature, and not as members of any specific committee, that we should move forward with a public hearing,” Republican Rep. Mark Finchem wrote in a press release about the meeting.

Activists, influencers, and Republican strategists are calling for Trump supporters to gather during the meeting, as well as both Saturday and Sunday at noon at the Arizona State Capitol.

Stop the Steal organizer Ali Alexander told Gateway Pundit that “we are looking for GOP leaders to show up.

“We cannot wait for the slow State Senate. If Republicans want to avoid a primary, they’ll show up to meet their voters Monday morning and stand with President Trump. If not, we’ll know who is slow walking the election integrity issue. In a republic, they work for us,” Alexander added.

Republican entrepreneur, influencer, and activist Michael Coudrey, who will also be in attendance, told the Gateway Pundit that “#StopTheSteal campaign has one primary objective. To ensure honest, transparent and legitimate elections.”

“We will organize in Arizona to raise public awareness about elections fraud, lack of transparency and significant issues with mail-in ballots,” Coudrey added. “Additionally, we intend to hold AZ State lawmakers accountable and ensure they are pursuing the overwhelming evidence of elections irregularities.”