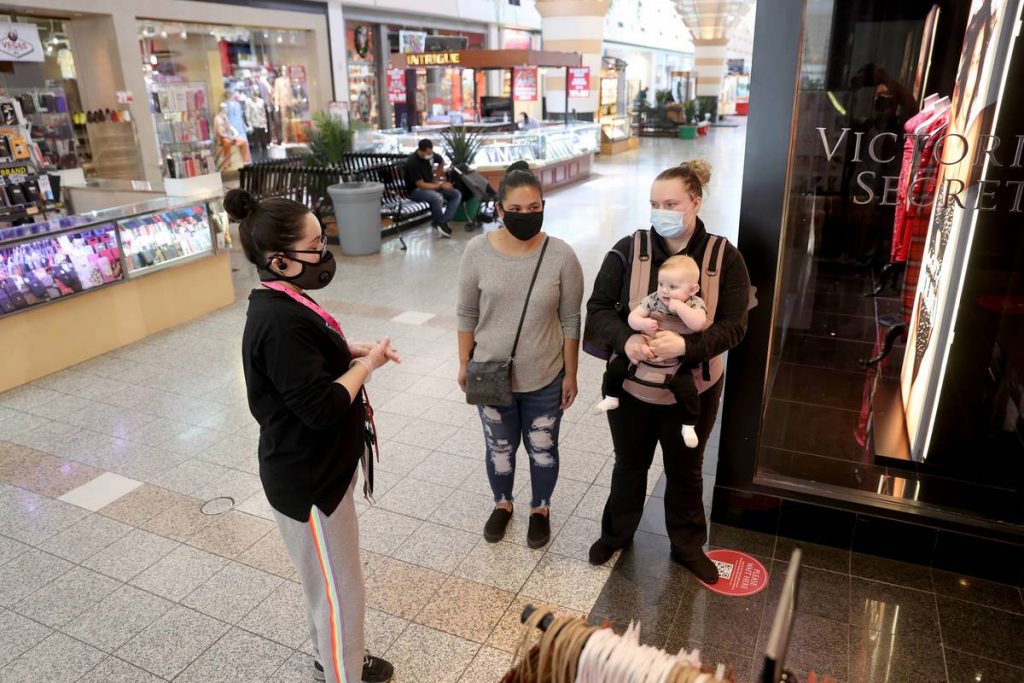 The move prompted calls for a walkout among some Walmart workers and spurred petitions on Change.org to “Stop Black Thursday” and “Move Black Friday Start Back to Friday” as the decision to open doors on Thanksgiving spread across the industry.

The coronavirus pandemic has retailers reversing course and closing their doors on Thanksgiving, providing even more of a boon to online shopping and raising the question: Is this the end of an era?

“It might be a little bit more poignant next year in terms of, ‘How did that work? Did customers really, you know, miss that?’ ” Retail Association of Nevada spokesman Bryan Wachter said.

Closed for the holiday

Walmart was the first major retailer to announce it would close for Thanksgiving this year, with John Furner, president and CEO of Walmart U.S., saying in a news release July 21: “We know this has been a trying year, and our associates have stepped up. We hope they will enjoy a special Thanksgiving Day at home with their loved ones.”

The largest mall operator in the U.S., Simon Property Group, said in September that its locations will be closed on the holiday. Downtown Summerlin and Brookfield Properties, which operates Fashion Show mall, also said they will be closed.

Last year, Thanksgiving Day was the third-busiest day for in-store activity with 37.8 million shoppers, behind Black Friday, 84.2 million, and Small Business Saturday, 59.9 million, according to the National Retail Federation.

“If people are getting together on Thanksgiving with friends, or even immediate family, that in this pandemic, shopping is not the first thing they’re thinking about,” he said.

Some shoppers, like Las Vegas resident Nola Woodfin, said Thanksgiving should be spent with loved ones.

“You should be spending time with your family and not be shopping on Thanksgiving,” she said. “There’s time for it on Friday.”

“It’s perfect for sales,” he said.

Hollis said he is not affected much with in-store shopping limited on the holiday this year, saying, “That is why they have online shopping.”

Retailers with a strong e-commerce platform are well positioned to benefit from the Thanksgiving closures.

Americans are expected to spend $6 billion online on Thanksgiving Day, up 42.3 percent from last year, according to Adobe Analytics, which tracks thousands of websites.

“It makes sense to be closed on Thanksgiving and start working your e-commerce arm of your business as best as you can,” said Tom Arnold, a professor of finance at the University of Richmond’s Robins School of Business.

Retailers with a strong online presence, like Amazon, Target, and Walmart, have added more fulfillment and distribution centers.

“When you look at stores that have not done well with an online presence, it reads like a bankruptcy transcript,” Arnold said.

Retailers will have online deals through Thanksgiving weekend.

“Since you might not be able to come to the store, they will have Thanksgiving special deals for online only that will capture the consumers’ attention on their website,” he said.

While most Americans have the holiday off, approximately 17 percent of U.S. adults typically work on Thanksgiving, according to a 2018 YouGov poll.

Some consumers have slammed retailers that launched Black Friday deals on Thanksgiving Day in recent years, saying employees should be able to spend time with their families.

“They were being criticized for not honoring the holiday, and some stores closed on Thanksgiving to make a point,” Arnold said of the criticism.

With stores closed this Thanksgiving, it can be a double-edge sword. Employees who volunteer for holiday shifts might lose out on that holiday pay, an opportunity that doesn’t happen often.

“Since most of these holidays are toward the end of the year, you can almost view it as employees who rely on end-of-year bonuses,” Arnold said. “So workers are trying to figure out how to make up that hole in their income. It might mean working more hours than usual at regular pay or working two jobs.”

As Horwitz put it, “There are clear trade-offs here.”

Wachter said, “There are quite a few employees who used to look forward to those extra hours of that extra pay on Thanksgiving, so we have to look at both ways if that opportunity isn’t going to be there as well.”