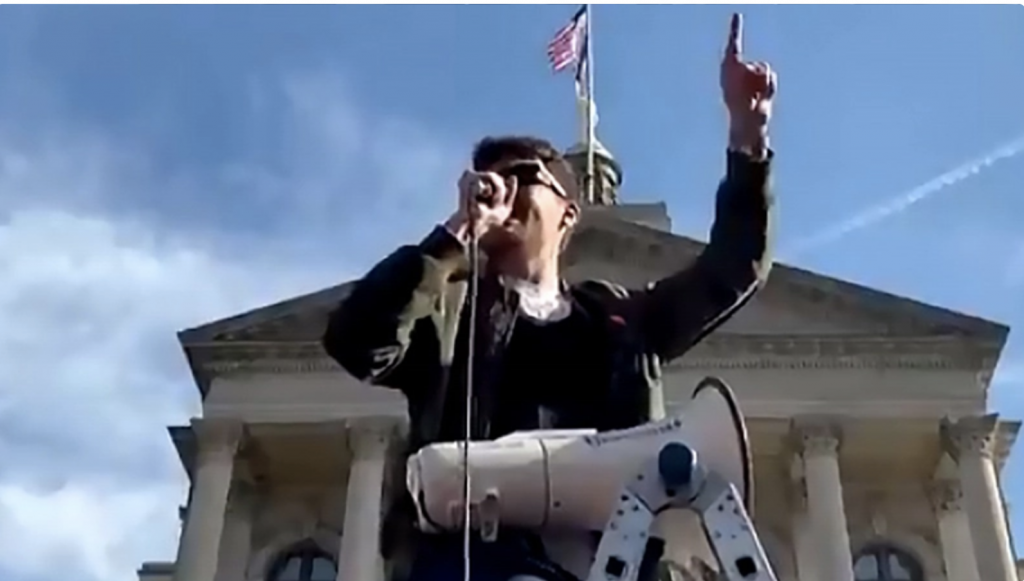 “And just like in 1776, God is on our side in this fight. We, the Americans, are the greatest force in the history of the world.”

In a fiery speech delivered in front of the Georgia State Capitol on Saturday, America First podcast host Nick Fuentes slammed the Republican Party leadership’s complete lack of action on voter fraud even as they are presented with bombshell evidence from the Trump campaign’s team of lawyers.“I am done being tricked and betrayed and abused by the Republican Party,” launched Fuentes. “The Trump Revolution began in 2016 as a revolution against the Republican Party. The Republican Party, which before stood only for the donors and the special interests.”

Fuentes added that “President Trump fought” the establishment and special interests and “made the Republican Party represent us, the American people,” and that the current fight against the Republican Party’s willingness to let Joe Biden win the election through fraud represents an extension of the same inter-party turmoil.

“Once again we find ourselves fighting the same battle, as President Trump fights for his political life, we look in this state and in this country, the Republican Party is nowhere to be found,” said Fuentes. “Where are the 2024 hopefuls, like Nikki Haley and Ben Sasse and Marco Rubio and Dan Crenshaw? They are nowhere to be found, and it is a disgrace.”

Fuentes then said that the consequence of failing to prove the allegations of voter fraud and successfully stop the theft of the 2020 election will mean the beginning of The Great Reset, a World Economic Forum-endorsed plan to fundamentally change the world economy under the guise of a COVID-19 response.

“If we are unsuccessful in our struggle to secure President Trump another term in office, then that will institute and introduce the will of global corporations over this country. They have already told us for their plan for us, it is called The Great Reset,” said Fuentes. “Under the Great Reset we will be ruled by a public and private partnership between the global governments of the world and the giant corporations of the world. We cannot allow that to happen.”

“We Americans have inherited the greatest civilization in the history of the world, and we’re not giving it up without a fight,” he added. “It is time for America and the Americans to be put first.”

“So we will keep turning out to these State Capitols, and we will keep fighting. We will never capitulate to the globalists, because we are Americans. If you think we have a difficult fight ahead of us, remember how this country started: It was a small, ragtag army, the Continental Army, against the greatest empire in the history of the world, the British Empire.

“And just like in 1776, God is on our side in this fight. We, the Americans, are the greatest force in the history of the world. Christ is King.”