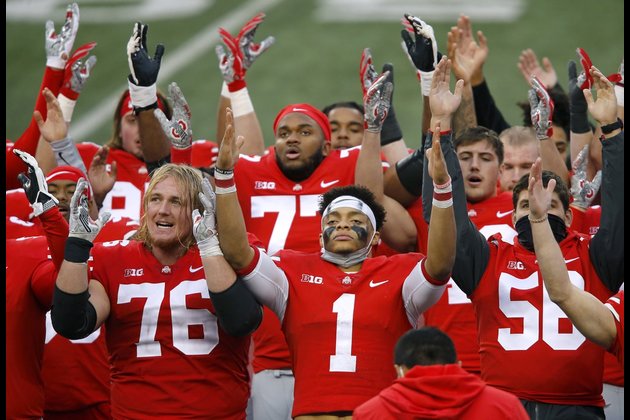 No. 3 Ohio State withstood a late charge by No. 9 Indiana to defeat the Hoosiers 42-35 at Ohio Stadium in Columbus on Saturday.

Ohio State (4-0, 4-0 Big Ten) quarterback Justin Fields was 18-for-30 passing for 300 yards and two TDs and his first three-interception game, while Master Teague ran for 169 yards on 26 carries and two scores. Fields also ran for 78 yards and a TD.

Fields who had as many touchdowns as incompletions in the first three games (11), threw his first three interceptions of the season and was sacked five times.

The top-ranked Crimson Tide scored 56 unanswered points and coasted to a win over the short-handed Wildcats in Tuscaloosa, Ala. Alabama (7-0, 7-0 SEC) has scored 35 or more points in 20 straight games, the longest streak in major college football history.

Mac Jones threw for 230 yards and two touchdowns before being replaced in the third quarter with the outcome not in doubt, and DeVonta Smith caught two touchdowns as part of nine catches for 144 yards. Smith set the SEC record for most touchdown catches in a career with Nos. 32 and 33.

Quarterback Kyle Trask was 26-of-35 for 383 yards and three touchdowns as the Gators went to Nashville and blew by the Commodores.

UF wide receiver Kadarius Toney caught six balls for 107 yards and a score and tight end Kemore Gamble hauled in three for 66 and two scores as the Gators (6-1, 6-1 SEC) have won four straight. Vanderbilt fell to 0-7.

Freshman quarterback Ken Seals was 22-of-34 passing for 319 yards, two touchdowns and an interception for Vanderbilt. Wide receiver Chris Pierce had four receptions for 97 yards and two scores.

Quarterback Desmond Ridder passed for 338 yards and two touchdowns and rushed for two more and the Bearcats held on for a road victory in a key American Athletic Conference matchup in Orlando, Fla.

The win kept the Bearcats (8-0, 6-0 AAC) a half-game in front of Tulsa at the top of the conference standings and mathematically erased any title hopes the Knights (5-3, 4-3) were harboring.

Ridder completed 21 of 32 passes with his touchdown throws going to tight ends Josh Whyle and Leonard Taylor. UCF’s Dillon Gabriel passed for a season-low 243 yards with a pair of touchdown passes, but the Knights finished with just 359 yards of total offense, far under their national-best 619.1 average entering the game.

The Cougars scored touchdowns on their first six possessions, quarterback Zach Wilson passed for four touchdowns in one half as they rolled past the Lions at LaVell Edwards Stadium.

BYU continued its perfect start and won its fifth straight by at least 17 points as it aimed to pad its resume three days ahead of the first College Football Playoff rankings release. Tyler Allgeier, who rushed for 141 yards on just 13 carries, scored on a pair of 2-yard touchdown runs.

The Cougars faced little resistance from North Alabama, a transitional Football Championship Subdivision program. They led 35-0 before the Lions scored their first points, all part of a first-half deluge.

Tyler Shough threw for 334 yards and three touchdowns as the Ducks created 28 points off four Bruins’ turnovers in a Pac-12 Conference win at Autzen Stadium.

Shough completed 19 of 30 passes for the 3-0 Ducks, with Devon Williams catching six throws for 123 yards and a touchdown. Shough got plenty of help from a defense that failed to force a turnover in season-opening wins over Stanford and Washington State.

Oregon made up for that and then some against the 1-2 Bruins, who didn’t have starting quarterback Dorian Thompson-Robinson due to issues related to COVID-19. Redshirt freshman Chase Griffin played in Thompson-Robinson’s place and connected on 19 of 31 passes for 195 yards and a touchdown, but also tossed two interceptions and lost a fumble. All resulted in Oregon scores.

J.T. Daniels threw for 401 yards and four touchdowns in his debut to lead the Bulldogs to a win over MSU at Sanford Stadium in Athens, Ga.

Daniels, a redshirt sophomore who transferred from Southern Cal, completed 28 of 38 passes for the Bulldogs (5-2, 5-2 SEC). Daniels became the first Georgia quarterback to throw for 400 yards since Aaron Murray in 2013. His 40-yard touchdown to Kearis Jackson with 9:50 remaining broke a 24-24 tie and put Georgia ahead to stay.

Mississippi State had one final possession and drove to the 47, but quarterback Will Rogers was sacked by Azeez Ojulari on fourth-and-4 to end the hopes for MSU. Georgia ran the final 1:18 off the clock.

The Wildcats took control of the Big Ten West Division with a statement victory over the visiting Badgers at Evanston, Ill.

With the running game only accumulating 24 yards, Peyton Ramsey stepped up for the Wildcats (5-0) with 203 passing yards and two touchdowns. Northwestern forced five Wisconsin turnovers, including four in the first half and led 14-7 at the break.

For the Badgers (2-1), redshirt freshman quarterback Graham Mertz struggled against a menacing defensive front, finishing with three interceptions. Wisconsin was held scoreless over the final 50-plus minutes.

Spencer Rattler threw for 301 yards and four touchdowns and Rhamondre Stevenson ran for 141 yards as the Sooners beat the Cowboys in Norman, Okla.

The win was the Sooners’ fifth consecutive and put Oklahoma squarely in the race for a berth in the Big 12 Championship Game after losing its first two conference games. The Sooners (6-2, 5-2 Big 12) scored a pair of fourth-quarter touchdowns to put the game away.

Reese White scored on a late go-ahead 3-yard touchdown run and the undefeated Chanticleers remained atop the Sun Belt East Division with a win over the visiting Mountaineers.

Grayson McCall threw for 200 yards with two touchdowns and ran for a 62-yard score as the Chanticleers (8-0, 6-0 Sun Belt) continued their special season by beating Appalachian State (6-2, 4-1) for the first time in seven tries. Coastal outscored the Mountaineers 25-6 in the second half.

Trailing 23-21 in the fourth quarter, Coastal’s Alex Spillum intercepted Zac Thomas (17 of 29 for 211 yards, one touchdown, three interceptions) with about seven minutes left to play. The Chanticleers capitalized when White spun himself into the end zone with 2:24 remaining to make the score 27-23 after a failed two-point conversion try.

Quarterback Brock Purdy had three first-half touchdown passes to lead the Cyclones past the visiting Wildcats in Ames, Iowa.

Purdy finished with 236 yards on 16-of-20 passing. Breece Hall, the nation’s leading rusher coming into the game, added 135 yards and two rushing touchdowns, including 123 rushing yards and both touchdowns in the first half.

Iowa State (6-2, 6-1 Big 12), alone in first place in the Big 12 Conference, pinned the first shutout since 2015 on Kansas State (4-4, 4-3). Quarterback Will Howard was just 3-of-9 passing for 32 yards and an interception before being knocked out of the game with an injury in the first half for the Wildcats, who have dropped three in a row.

Zonovan Knight scored on a pair of touchdown runs and the Wolfpack used a late blocked field goal to pull out a victory and end the Flames’ bid for an undefeated season in Raleigh, N.C.

N.C. State’s Vi Jones blocked a 39-yard field goal attempt from Alex Barbir with 1:18 remaining to preserve the lead. Knight tallied the go-ahead score on a 4-yard play with 6:53 remaining in the game.

Liberty (8-1), which was trying to conquer its third Atlantic Coast Conference opponent of the season, had a 10-game winning streak dating to last season. The Flames ended one victory shy of tying the school record.

Following a three-week layoff, the Tigers overcame a slow start to beat the visiting Volunteers.

The Tigers (5-2, 5-2 SEC), who had their game against Mississippi State postponed due to COVID-19 concerns following a bye week, rallied from an early 10-0 deficit to win their third consecutive game.

The Volunteers (2-5, 2-5) suffered their fifth consecutive defeat — all by double digits.