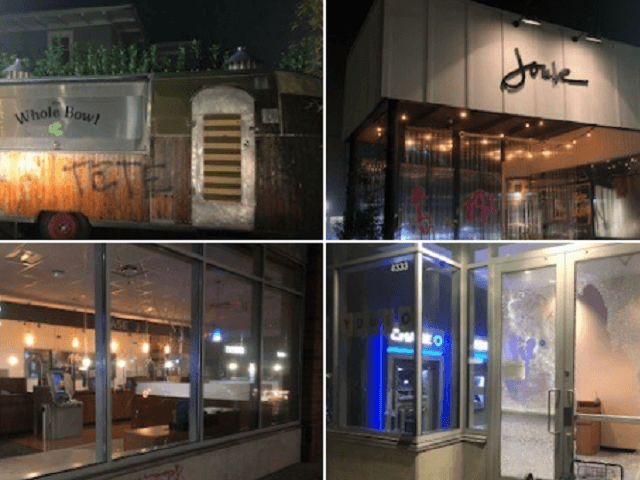 Reports from Portland, Oregon, indicate that police made no arrests of Antifa rioters who vandalized businesses on Friday night.

“This evening (Friday), a group gathered outside the Mexican Consulate in Downtown Portland,” the Portland Police Bureau tweeted. “The group was described as dressed in all black and wearing helmets. The group engaged in criminal behavior which included spray painting and vandalizing the property.”

Portland journalist Andy Ngo, reported the Antifa group publicized the planned march and vandalism via a digital flyer on social media. They secretly spread the word about a second “private” march to take place while police were distracted with the downtown event, he reported.

There is a group of antifa in black bloc smashing up numerous businesses again in Portland. They announced their gathering via a digital flyer. They're vandalizing banks and real estate in the name of trans lives of color along NE Sandy Blvd. #PortlandRiots #antifa pic.twitter.com/rxZmcLm7mz

Portland police acknowledged that “a separate group of nearly 50 people gathered at NE Halsey St and NE 52nd Ave before moving to NE 43rd Ave and NE Sandy Blvd. As the group headed southwest on NE Sandy Blvd towards NE 40th Ave, they vandalized many businesses including many small businesses in their path.”

An official police statement reports “no arrests were made.”

Ngo reported the group attacked the liberal icon Whole Foods on the city’s northeast side during a “day of rage” in support of trans people.

In addition to local and national businesses, the rioters also turned their attention to the Consulate of Mexico in Portland, Independent Media PDX tweeted.

Bob Price serves as associate editor and senior news contributor for the Breitbart Texas-Border team. He is an original member of the Breitbart Texas team. Price is a regular panelist on Fox 26 Houston’s What’s Your Point? Sunday-morning talk show. Follow him on Twitter @BobPriceBBTX, Parler @BobPrice, and Facebook.