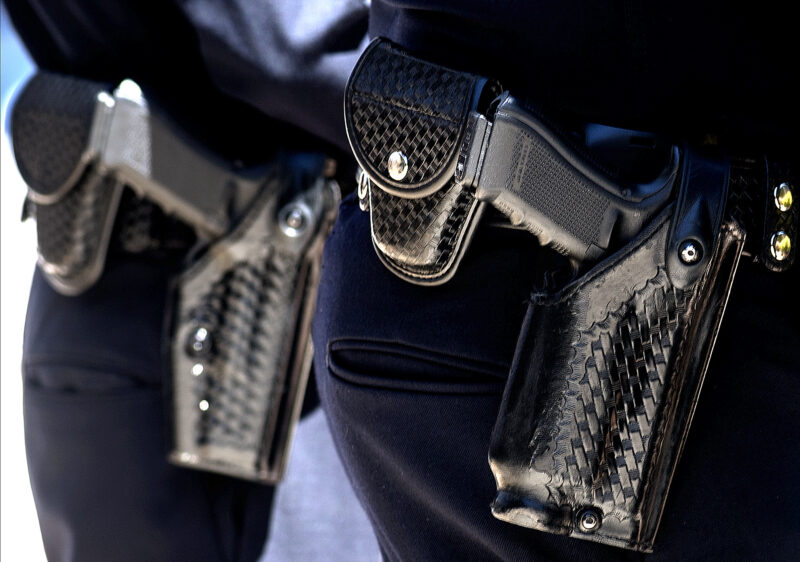 Marvel said the policies are aimed at “ensuring California has the best, most highly educated officers in the country by the end of this decade.”

None of the policies introduced dealt with officer decertification – the most high-profile police reform effort left on the table at the end of the last legislative session. But Marvel and Nunez hinted that their own preferred version of a bill would be rolled out in the coming weeks or months.

“We’ve been on record that PORAC and CalChiefs have been in support of that from the very beginning. With legislation, the devil’s in the details,” Nunez said. Opposition from their groups to the measure that failed last session is widely attributed as contributing to its failure.

A joint investigation by Voice of San Diego and news outlets across the country found that more than 80 officers convicted of crimes in California are still on the job. At SDPD, one officer who knocked his wife unconscious remains on the force and was even allowed to continue responding to domestic violence calls.

In the press conference unveiling the proposals, Marvel tried to thread a needle between acknowledging the types of police interactions that have led to widespread demands for accountability, while also blaming the public and the entertainment industry for negative perceptions of policing that he said make it harder for departments to recruit.

Marvel quoted a criminologist who said departments should “recruit people who have the capacity for emotional regulation, so that they don’t get angry, they don’t see authority challenges as personal challenges, they don’t fall on use of force as a first response to a challenge to their authority.” But he also said “disrespect for law enforcement has become a cultural norm nationwide” and that perceptions of law enforcement as “hard-nosed” are a result of “culture” and “the entertainment industry.”

Meanwhile, the Assembly’s select committee on police reform – formed after the failure of the decertification bill and other measures – is set to meet on Monday.

On Tuesday, San Diego County’s Board of Supervisors quietly backed away from SB 1045 and SB 40, two high-profile laws that allow three California counties to implement a pilot program for the expansion of court-ordered conservatorships. SB 1045  would require participating counties to provide an appointed guardian and housing to any patient who had at least eight involuntary hospital stays for mental health treatment over a one-year period; SB 40 was later introduced to amend the original legislation, adding several procedural changes

San Diego now joins Los Angeles and San Francisco in passing on the new conservatorship law, despite Assemblywoman Lorena Gonzalez’s push to include San Diego in SB 1045 when it was introduced in 2018. A year later, Supervisors Dianne Jacob and Nathan Fletcher recommended that the county develop the pilot program. The board voted to do so, and a housing conservatorship working group was established to evaluate the program’s effectiveness and feasibility.

The legislation was passed on the consent agenda, meaning there was no public discussion about it. The board based its decision on recommendations from the working group, concluding that, because psychiatric hospitals across the county often don’t — and are not legally required to — share patients’ detainment data, it would be difficult to identify how many times in a one-year period an individual was involuntarily admitted, thus creating another challenge in tracking those who would be eligible for conservatorship.

The working group pointed to another major requirement of conservatorships as a future legal hurdle: any eligible person has to be deemed “gravely disabled” as a result of a mental disability. “The existence of a mental disorder does not, in itself, justify a finding of grave disability,” the group wrote in the county report.

Lastly, the working group cited the state’s lack of funding as a reason to opt out of SB 1045 and SB 40. The expansion of conservatorships would increase the county’s staffing needs, services and housing options, according to the group, without having new state funding in order to implement the necessary changes.

The board intends to “maintain the intent of SB 1045/SB 40” through the county’s behavioral health continuum of care services, which supervisors believe offers a more comprehensive approach to mental health treatment without the added challenges of the legislation.

Kevin Faulconer Is Publicly Flirting With a Run for Governor, Again

For months, San Diego Mayor Kevin Faulconer has been speaking out against the state in general and the governor in particular: He condemned the state’s rolling blackouts in August without specifying what decision he was criticizing or what action should be taken as a result, and has spoken out against Prop. 15 (which ultimately failed) and AB 5, the landmark state labor law limiting the use of independent contractors.

Now, he’s turned up the criticism on Newsom specifically in the wake of the governor’s dinner at The French Laundry in Napa. That’s generated yet another round of buzz about whether Faulconer will act on the tweets and challenge Newsom directly in a race for governor.

He’s engaged a PR team, which has been reaching out to reporters, asking them to interview Faulconer about the criticisms and his political future.

The effort appears to be paying off: Los Angeles Times columnist Steve Lopez applauded Faulconer’s tweets and, naturally, asked him if he’s considering running for governor. “Of course,” Faulconer told him.

Politico did the same. This time, Faulconer added an adjective. He’s not just considering the move, but “seriously considering” it, he said.