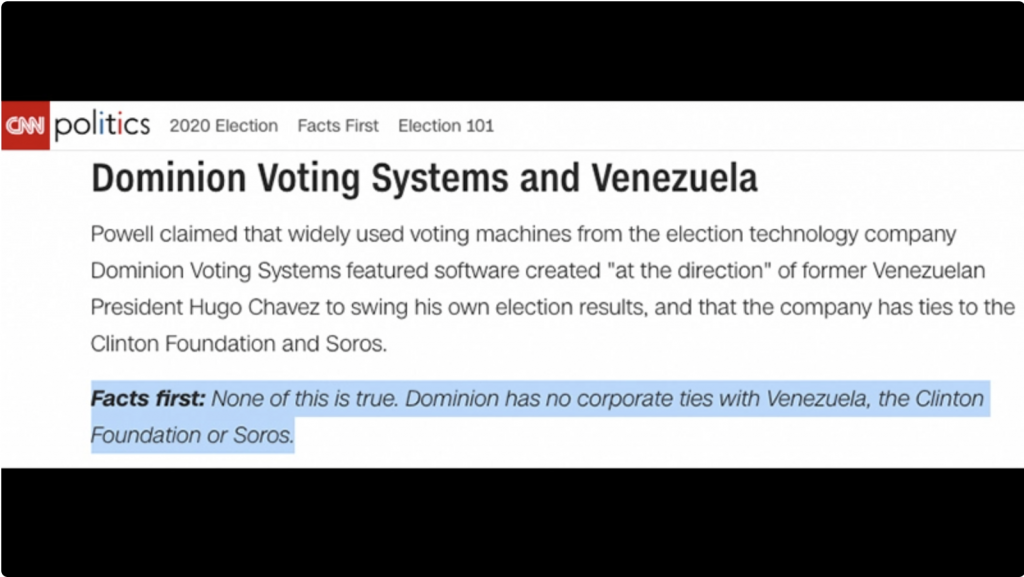 Outlet claims voting companies have no connection to Venezuela, Clinton Foundation or Soros while also admitting there are direct links to all three

While claiming the controversial voting machine company has “no corporate ties with Venezuela, the Clinton Foundation or Soros,” the globalist outlet subsequently admitted the company in-fact DOES have ties to all three.

CNN wrote, “Powell claimed that widely used voting machines from the election technology company Dominion Voting Systems featured software created ‘at the direction’ of former Venezuelan President Hugo Chavez to swing his own election results, and that the company has ties to the Clinton Foundation and Soros.”

“Facts first: None of this is true. Dominion has no corporate ties with Venezuela, the Clinton Foundation or Soros.“

The outlet said Trump allies have tried to tie Dominion to another company called Smartmatic and that Smartmatic, not Dominion, has ties to Venezuela.

However, in the press conference Powell stated, “The Dominion Voting Systems, the Smartmatic technology software, and the software that goes in other computerized voting systems here as well, not just Dominion, were created in Venezuela at the direction of Hugo Chavez to make sure he never lost an election after one constitutional referendum came out the way he did not want it to come out.”

So, the software for all of these companies goes back to Venezuela.

Despite definitively stating there are no ties, the article continues to admit, “Smartmatic was founded in Florida by two Venezuelans, and did provide election technology to the Venezuelan government.”

While trying to deflect rumors of Dominion or Smartmatic being tied to the Clintons, CNN said they have no corporate ties.

Nevertheless, in the very next sentence they write, “Dominion did agree to donate its technology to ’emerging democracies’ as part of a program run by the Clinton Foundation in 2014.”

Additionally, the article admits, “The chairman of the board of Smartmatic’s parent company is also on the board of a foundation run by Soros, Open Society Foundations.”

Regardless of what CNN says, legal battles currently taking place will soon expose Dominion, Smartmatic and other voting machine companies.