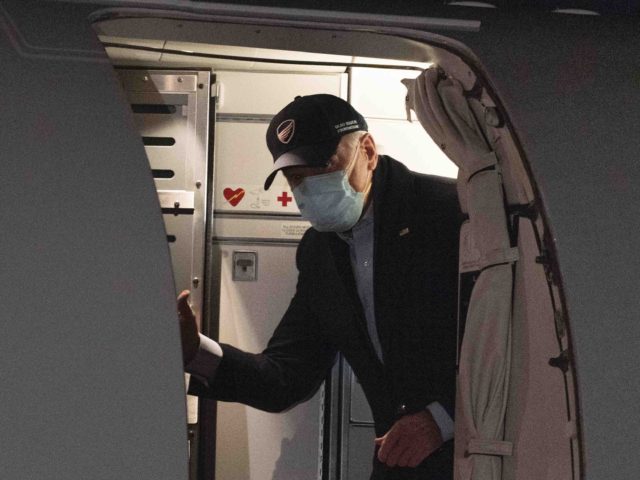 Murtaugh noted that the Biden campaign had not denied the substance of reports that Hunter Biden had arranged meetings between his business partners in Ukraine and China and with then-Vice President Biden.

The reports have been based on emails purportedly discovered on a laptop abandoned at a repair shop in Delaware, and subsequently reported by the New York Post and others; and emails shared independently with Breitbart News by one of Hunter Biden’s former partners.

Biden is reported to have met with an adviser to the corrupt Ukrainian energy company, Burisma; and with executives from the China Entrepreneur Club (CEC), including Chinese billionaires and Chinese Communist Party loyalists.

The Biden campaign “does not dispute the authenticity of these emails nor do they dispute that the laptops these emails came from” belonged to Hunter Biden, Murtaugh said.
He argued that the emails showed that Joe Biden lied when he said: “I have never discussed, with my son or my brother or with anyone else, anything having to do with their businesses. Period.”

Murtaugh added that Biden had not denied any of the allegations.

Just so we’re clear on what has happened here:

Three days ago, Fox News reported that Joe Biden was identified as a FINANCIAL BENEFICIARY in a deal worked out between Hunter and a Chinese energy company tied to the communist government.

And his campaign hasn’t denied it.

“The lone exception is to say that no such meeting [with Burisma] appeared on Joe Biden’s official schedule at the time. This explanation is a joke, and it’s embarrassing to the Biden campaign that this is the best they can do.”

He noted that the Biden campaign had told Politico that it could not rule out that such a meeting might have taken place. And he noted a report in Fox News about emails that discussed 10% of one deal being set aside for someone called the “big guy.”
Murtaugh also noted that the one time a mainstream media reporter asked Biden about the allegations, Biden attacked him.

I asked Joe Biden: What is your response to the NYPost story about your son, sir?

He called it a “smear campaign” and then went after me. “I know you’d ask it. I have no response, it’s another smear campaign, right up your alley, those are the questions you always ask.” pic.twitter.com/Eo6VD4TqxD

Nevertheless, Murtaugh argued, journalists covering the Biden campaign had a duty to ask him the following questions:

Murtaugh added that efforts by Facebook and Twitter, the “Silicon Valley mafia,” to “squelch” the story had “backfired on them, because it made it a much bigger story.”

He said that if the moderator in the third debate did not bring up the issue, President Trump would likely do so.

Joel B. Pollak is Senior Editor-at-Large at Breitbart News and the host of Breitbart News Sunday on Sirius XM Patriot on Sunday evenings from 7 p.m. to 10 p.m. ET (4 p.m. to 7 p.m. PT). His newest e-book is The Trumpian Virtues: The Lessons and Legacy of Donald Trump’s Presidency. His recent book, RED NOVEMBER, tells the story of the 2020 Democratic presidential primary from a conservative perspective. He is a winner of the 2018 Robert Novak Journalism Alumni Fellowship. Follow him on Twitter at @joelpollak.