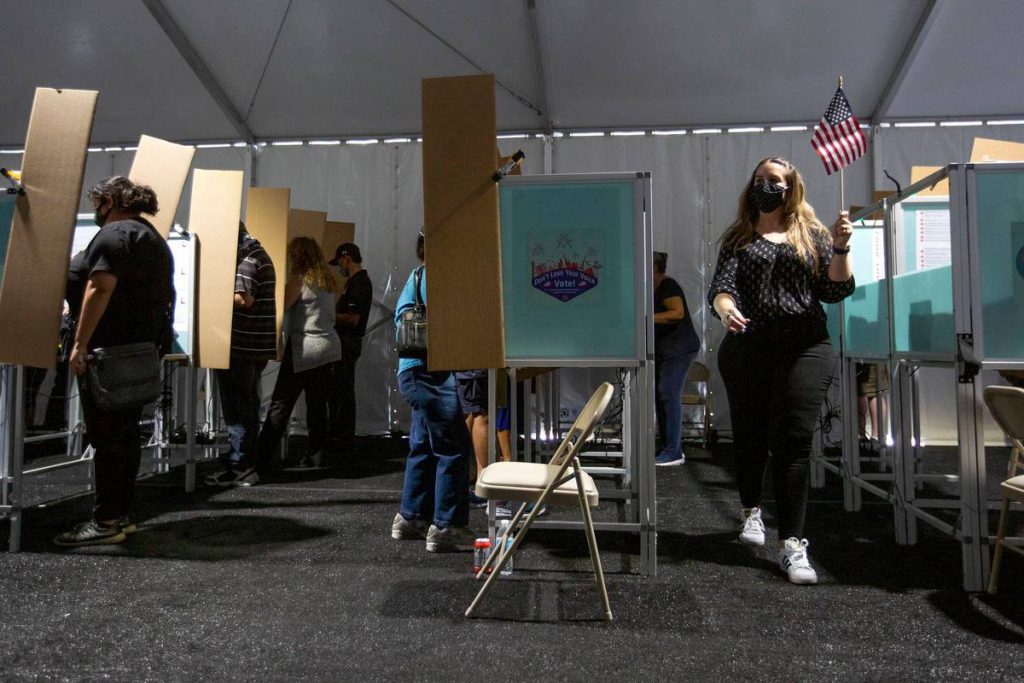 In 71 years on this earth, Carl Johnson had never voted.

That changed on Saturday, when, surrounded by his family and just a few hundred yards from the elementary school he attended in the 1950s and 60s, he cast his inaugural ballot at the Doolittle Senior Center on Nevada’s first day of early voting in the 2020 general election.

“I don’t like the way things are going,” said Johnson, who voted for Democratic presidential nominee Joe Biden. “And my vote can help make the change.”

Johnson was one of more than 17,800 voters who descended on the more than 30 early voting sites throughout Clark County as of 3 p.m. Saturday.

Most sites had long lines at the beginning of the day that tapered off by late afternoon. Voters appeared to be wearing masks and following other new guidelines designed to protect voters and workers during the COVID-19 pandemic.

Clark County Registrar Joe Gloria said the initial rush of people is typical of early voting periods and was expected this year, as many voters are excited, have thought about this election for a long time and want to get it over with.

He cautioned that long lines are to be expected on the first and last days of early voting, and they are not necessarily indicative of any problems at that particular center. Same-day registration, coupled with the longest ballot in Clark County’s history, can make the voting process a little longer than in past years.

Gloria said that as of 3 p.m. Saturday, only one center, located at the Lowe’s at 2570 E. Craig Road, has had a significant technology problem. He said a hardware issue caused this center to delay its opening until 11 a.m., two hours after the scheduled time.

According to Gloria, some 1,300 to 1,400 poll workers staffed Saturday’s early voting launch. Early voting will run Saturday through Thursday until Oct. 30.

Saturday’s incomplete turnout numbers were lower than tallies in previous election years’ but that may change as final totals roll in.

However, the coronavirus pandemic has spurred on a massive mail balloting turnout of more than 132,000 statewide as of Friday. Some 67,000 of these came from Clark County.

By the early afternoon, several hundred people were in a line that stretched across the vast parking blacktop outside the Galleria at Sunset shopping mall in Henderson.

An estimated three-hour wait from start to finish appeared to lessen somewhat into the mid-afternoon, and many voters in the 84-degree heat came prepared with umbrellas and camping chairs.

Michelle Hulsizer, the team leader for the early voting site, said that roughly a few dozen people were on the scene by 6:30 a.m., more than two hours before the 9 a.m. opening. And some even arrived at 4 a.m., she said, because they mistakenly believed the site opened two hours earlier than it did.

The majority of people were voting in person, although a few dropped off mail ballots, according to Hulsizer.

Outside the mall in Henderson, 71-year-old Harvey Weatherford, a Republican who is voting once again for Trump, said he was voting in person to avoid the brouhaha over mail ballots and “remove any doubt” about his choice.

“Regardless of what the outcome is going to be, we all know we’re going to be sitting there with a battle going on with: ‘That’s not a true number, he didn’t win. I won. He lost, and I won.’ That battle’s going to happen.”

Weatherford assessed Trump’s last four years in office favorably, saying the economy was doing well before the pandemic. He said what appeals most to him about Trump is that he is a political outsider and businessman, which was a common narrative that drove his victory in 2016.

Experts say that voter fraud in the U.S. is rare and that voting by mail, which has been done for centuries, is safe.

“There may not be any fraud, but he’s putting it out there like there’s going to be,” Patrick Lear, a Biden supporter, said about Trump.

So Lear, 61, who also voted outside the Henderson mall, said he became apprehensive over mail-in voting, which he believed had become “tainted.”

Outside the East Las Vegas Community Center, there was an approximately 90-minute wait to vote by 10 a.m., but that soon shortened as the line moved quickly.

Former Las Vegas Councilman Bob Coffin was among voters readying to cast a ballot. “This is just too important so I’m going to vote it early,” he said.

Some voters shared a sense that they were both anxious to get it over with and also reluctant to want to vote by mail with the Trump-fueled contention over that method’s legitimacy.

Even those who believed it was safe to vote by mail were leery about the prospect that it could turn into an ugly post-election fight, and decided not to risk it.

Coffin, 78, said it was “un-American” for President Donald Trump to sow seeds of doubt about the election process.

“I just don’t want any of the trouble,” said Glenn Truitt, an attorney and independent who is voting for Biden and stood in front of Coffin in line.

Truitt, 46, said he regularly voted by mail in the past, but he foresaw the potential that those votes could be contested in court and not be resolved for weeks or perhaps even months.

“I don’t think it’s good for us, and I don’t expect there to be an Al Gore figure who rolls over for the good of the nation this time,” he said, referring to the last contested election in 2000, infamously waged over “hanging chads.”

Meanwhile, some voters who said they were choosing Biden prepared to do so only because he was not Trump, although others believed he represented a return to normalcy after four years of a chaotic Trump administration.

At the East Las Vegas Community Center, Elizabeth Schrier, 53, said she thought Biden would do the better job of protecting Social Security and, in general, keep his promises.

Every election is important, she noted, but “it just seems like this election is really — there’s a lot at stake here.”

Lear said he was worried about a 6-3 conservative U.S. Supreme Court majority under Trump.

Angelo Cunanan, a 20-year-old preparing to vote for the first time outside the mall, said he liked Biden’s plans for the environment and gun control, although he would have preferred Sen. Bernie Sanders or former South Bend, Indiana, Mayor Pete Buttigieg as a candidate.

By 6:30 p.m., the line at Galleria at Sunset mall was less than 10 minutes, and election workers expected the polls to close on time at 7 p.m. with no voters left out.

Edin, an election officer who had worked since the booth opened at 9 a.m., said there had been a steady flow of about a dozen people at a time all afternoon and things slowed down around 4 p.m.

“This morning the line wrapped all the way around the Dilliard’s and back,” she said, pointing about a quarter-mile away. “Some people lined up at 5 a.m.”

Those in line were chatty and considerate of the markers keeping people socially distanced while they briefly waited. One man passed out sodas while two others found friendship in their respective military hats and veteran status.

Long waits worth it, voters say

The Las Vegas residents live close to the community center and usually cast their votes there. They were surprised to find 200 people already in line when they got there at 9:30 a.m.

Asked if they ever thought that the wait wasn’t worth it, Esther Morada said: “We have to vote. This is our civic duty.”

She believes this presidential election drew more early voters than in years past, and she even opened the site early to voters to get the process going. While hundreds of voters were waiting in line, organizers made sure those who had disabilities were prioritized so they didn’t have to wait in the hot sun.

There were a few booths off to the side designated for folks who did not want to wear a mask, although Richards said only two people, both toddlers, had entered without masks as of Saturday morning.

For the large operation, there were only 35 volunteers to keep everything going.

“It’s been nonstop,” she said.

For Debbie Britt, the wait at the community center was better than going to Centennial Center, which had a far longer line, she said. She was with Britney and Taylor Leavitt, who said they were happy to wait in line and make a day out of it.

One poll worker at Centennial, which had quieted by late afternoon, estimated a crowd of 1,250 people on Saturday morning.

Britney Leavitt said the wait at Desert Breeze was worth it.

“I wanted to make sure there was no question my vote was counted,” she said.

Over at the Las Vegas Ballpark, voters waited hours to cast their votes.

“I don’t trust the mail because it’s such an important election,” said April Burns, who was voting alongside her husband Jim Burns, son Sam Burns and family friend Robert Drake.

She said she wasn’t just nervous that her ballot would be lost if cast through the mail, but that she might have filled something out wrong that would have prevented it from reaching election officials in time to be counted.

The whopping three-hour wait was worth it for the piece of mind, she said as she was nearing the front of the line.

Sam Burns and Drake, both 18, were excited to cast their first votes this year.

By 6 p.m., the ballpark’s line had thinned to just a dozen or so people.

Republicans march to the polls

In Henderson, Nevada State Republican Party Chair Michael McDonald led a march of some 150 people to the polls — one of several walks held by Republicans throughout the state.

“We had people out who had never voted before,” McDonald said. “They were about 40 or 45, and they’re voting for the president. It’s a great feeling. That’s what America is about. It doesn’t matter whether you’re Republican, Democrat, Independent — it’s about having your voices heard.”

The Nevada State Democratic Party and Biden’s campaign have pushed hard for Democrats, who outnumber Republicans by about 88,000 in Nevada, to submit mail ballots or vote early.

Mail ballots in Nevada have so far trended hard in Democrats’ favor, as they have in many states nationwide, with Trump-sewn mistrust in that voting system likely to lead to a surge in Republican votes on Election Day.

McDonald said he agreed that early and mail votes will likely trend in Democrats’ favor, with Trump making up ground on Election Day.

He sharply criticized Gov. Steve Sisolak and other top Democrats, whom he said pushed through partisan changes to the state’s voting system due to apparent COVID-19 risks only to pose for photos and submit ballots in person on Saturday.

“It was a scam from the beginning,” McDonald said.