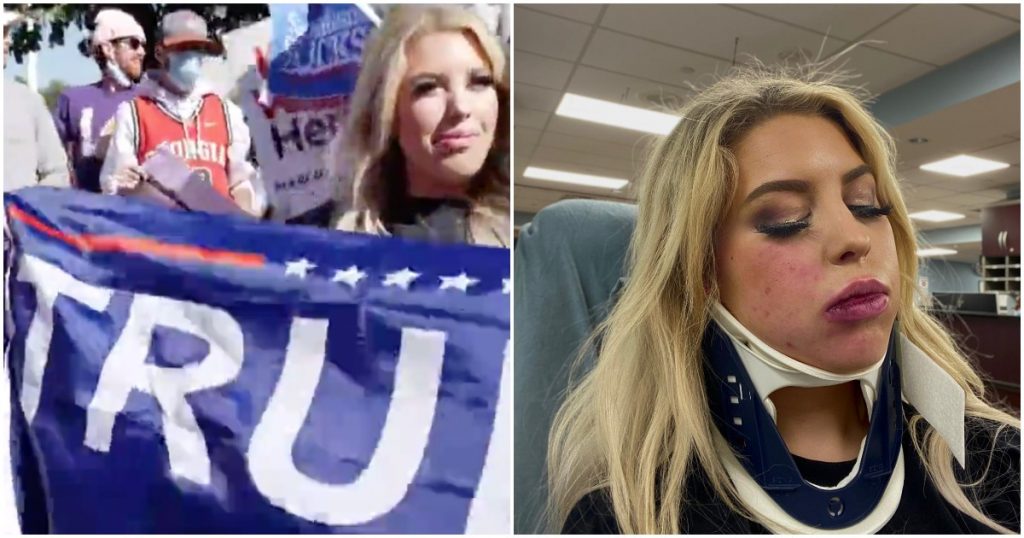 A Trump supporter has been brutally assaulted by a Black Lives Matter mob while campaigning to confirm Judge Amy Coney Barrett to the Supreme Court of the United States in Washington, D.C.

Isabella DeLuca, the Outreach Director for the pro-Trump organization Republicans for National Renewal, was attacked by multiple Black Lives Matter and Women’s March far-left activists, after DeLuca advocated for confirming Coney Barrett – a woman – to the Supreme Court.

DeLuca described being assaulted by a geriatric older female in an exclusive statement provided to the National File.

“The first woman was a white older woman – she had glasses on, a glittery bedazzled Black Lives Matter shirt,” Deluca told National File. “She looked like she could’ve been my grandma, honestly.”

The Black Lives Matter supporter grabbed DeLuca’s Trump flag, and then when DeLuca attempted to grab it back, the woman punched and choked her.

Due to the advanced age of the woman and her presumably fragile condition, DeLuca felt reluctant to defend herself, but was determined to get her property – the Trump flag – back.

It was at that moment that a much younger female leftist arrived on the scene and began joining her older compatriot in hitting, pushing and punching DeLuca.

After the leftists fled, DeLuca sought medical attention and was subsequently hospitalized.

DeLuca was given a cervical collar due to her extensive head and neck injuries, had her lips bloodied, and is also enduring blurry vision and dizziness.

Coverage of the protests by Breitbart News earlier today showed DeLuca waving a Trump flag and shouting “four more years” in support of the President.

The attack took place during the Women’s March, a left-wing anti-Trump march which has been involved in protests against the President’s nomination of Coney Barrett to the nation’s highest court.

The Women’s March received over $246 million in financial support in early 2017 from globalist megadonor George Soros. The organization has come under fire after accusations of anti-Semitism were made against its leadership.