ONE IS NOT LIKE THE OTHER: ﻿Biggest takeaways from dueling town halls; Trump faces grilling, Biden not asked about Hunter’s emails﻿ 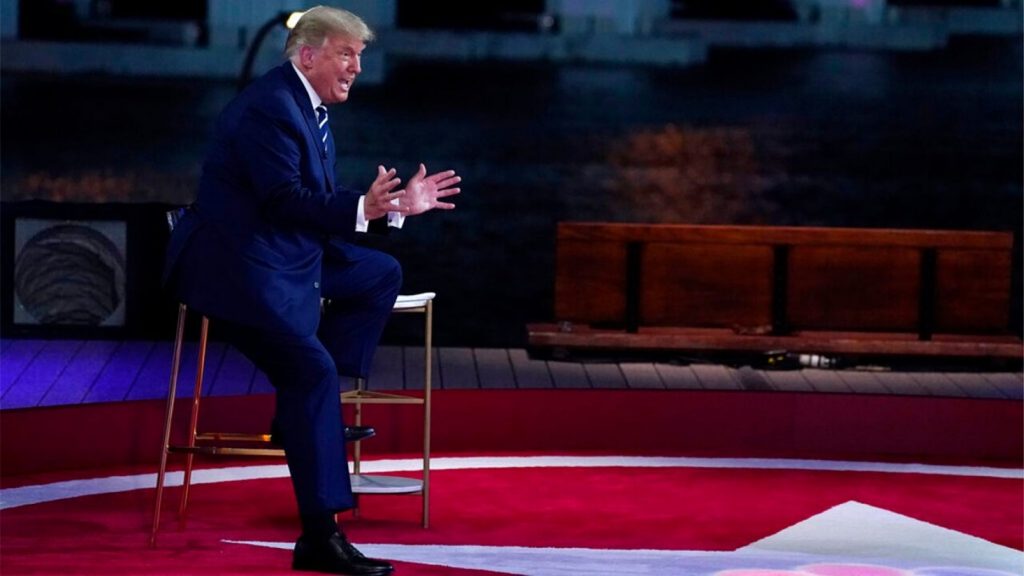 Democratic presidential nomineeJoe Biden said voters deserve to know his stance on Supreme Court packing before the election, while President Trump faced a grilling by NBC on the coronavirus, taxes and white supremacy in dueling town halls Thursday night.

Biden, the former vice president, signaled at an ABC News town hall that he’d announce his stance on court-packing after the Senate votes on Trump’s nomination of Amy Coney Barrett and before the Nov. 3 election.

The Democratic presidential nominee reiterated his position from the presidential primaries that “I have not been a fan of court packing”  but reversed course on his previously tight-lipped stance on whether he’d try to expand the number of justices on the court to combat a conservative majority.

BIDEN’S COURT-PACKING 180, SAYS HE WILL NOW TELL VOTERS HIS STANCE BEFORE ELECTION

Voters “do have a right to know where I stand,” Biden said.

Meanwhile on NBC News, Trump faced tough questioning on issues such as whether he has a replacement for Obamacare, his handling of the coronavirus and a potential peaceful transfer of power.

“Will you accept the results of the election?” NBC News’ Savannah Guthrie asked Trump. “You’re own FBI director says there is no evidence of voter fraud.”

Guthrie brought up a New York Times story about Trump’s taxes that said he only paid $750 in taxes in both 2016 and 2017 and that he holds $421 million in loans and debts.

“It’s a tiny percentage of my net worth,” Trump replied.

Meanwhile, on ABC, Biden said he doesn’t support a ban on fracking or defunding the police and he doesn’t see a need for another coronavirus lockdown.

But he said it’s “absolutely” OK to raise taxes on wealthy Americans and corporations during a weak economy because his economic plan would spur growth and create jobs. He stressed that he would only repeal the Trump tax cuts on the highest income earners.

“About $1.3 trillion of the $2 trillion in [Trump’s] tax cuts went to the top one-tenth of 1 percent,” Biden said. “That’s what I’m talking about eliminating, not all the tax cuts that are out there.”

In one exchange, a young Black man asked Biden about his comments to Charlamagne tha God that “you ain’t Black” if you don’t vote for him.

“Besides ‘you ain’t Black’ what do you have to say to young black voters who see voting for you as further participation in a system that continually fails to not protect them?” the audience member asked.

BIDEN PRESSED ON ‘YOU AIN’T BLACK’ COMMENT DURING TOWN HALL

Biden encouraged the young man to vote and then offered a long-winded response on his record on criminal justice reform, education and entrepreneurship that host George Stephanopoulos had to cut off.

“Did you hear what you needed to hear?” Stephanopoulos asked the young man.

Then Biden chimed in again and started talking about a story of his dad losing his job in Scranton.

“If you’re going to hang out afterwards I’ll tell you more,” Biden told him as Stephanopoulos tried to move on to the next questioner.

The Trump town hall was shorter than Biden’s but doubly more combative.

Trump kicked off the combative tone with a tweet announcing his town hall with “fake” NBC News and questioning whether he would be treated as well as “Sleepy Joe.”

The town hall started off with a 20-minute grilling by Guthrie on coronavirus, QAnon and white supremacy before getting to audience questions.

Guthrie asked Trump on why he was hesitant to denounce white supremacy during the first presidential debate and Trump complained that NBC won’t ask Biden if he denounces Antifa and said the former vice president is treated like “a child” by the press.

“Are you listening? I denounce white supremacy,” Trump told Guthrie. “What’s your next question?”

TRUMP DENOUNCES WHITE SUPREMACY, SAYS HE WILL ACCEPT A ‘PEACEFUL TRANSFER OF POWER’ BUT WANTS ‘TO WIN’

“It feels sometimes you’re hesitant to do so,” Guthrie responded.

In contrast, the Biden town hall was a more cordial affair. Neither Stephanopoulos nor the audience members asked Biden anything about his son, Hunter, and the bombshell New York Post reporting on emails that purport to link him to Hunter’s business dealings in Ukraine.