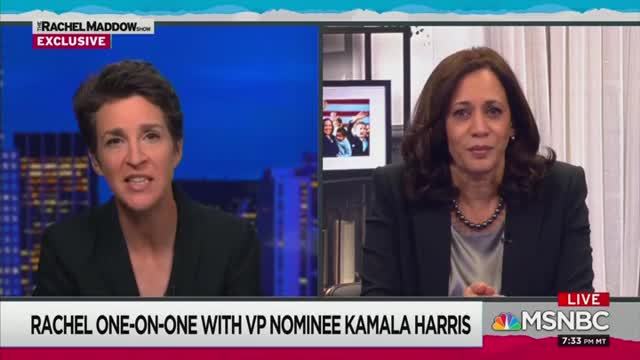 Wednesday, during a one-on-one interview with MSNBC’s Rachel Maddow, Sen. Kamala Harris (D-CA), the vice-presidential nominee for the Democratic Party, called on activism, even in the form of protests and shouting “when necessary.”

The junior California U.S. Senator laid out what she saw to be on the line, arguing that is the motivation for her supporters to stay engaged.

“People are scared,”Harris said. “You’re right. Civil rights are on the line. Workers’ rights are on the line. Consumer rights are on the line. Health care is on the line. These — all of these things are at stake. You are absolutely right. And the only point that I can make to hopefully relieve some of that righteous fear is, we have an election coming up. And it’s not only about the White House. It’s about the Senate. And, you know, I’ve been in the United States Senate for three and a half years. And I’m going to tell you something, I’ve been serving on this Judiciary Committee for a little while. The Senate makes decisions about who will be in these lifetime positions on these courts.”

“And it is there that these decisions will be ultimately made about our civil rights, about our right to love who we love and marry them, about our right to have equality and equal justice under law, about whether we protect collective bargaining and the rights of workers, whether we agree that access to health care should be a right and not just a privilege of those who can afford it,” she continued. “That’s where those decisions are made. And the United States Senate has a lot to do with it. And when we take back the Senate and have the majority, we will have a lot to do with whether or not we are one step closer to those ideals we hold dear. Right now, we don’t have the majority in the Senate. And so what have we seen? With Donald Trump and this Senate, we have seen nominations — because I’ve been there. I’ve witnessed it on the Judiciary Committee. I mentioned this in the debate — Rachel, 50 nominations and confirmations to the United States Court of Appeals for lifetime — lifetime appointments. Do you know of the 50, not one person is black? I’ve been watching where they bring in these nominees who are unwilling to agree that Brown v. Board of Education is precedent. It’s crazy. And I mean, you know, to use a term.”