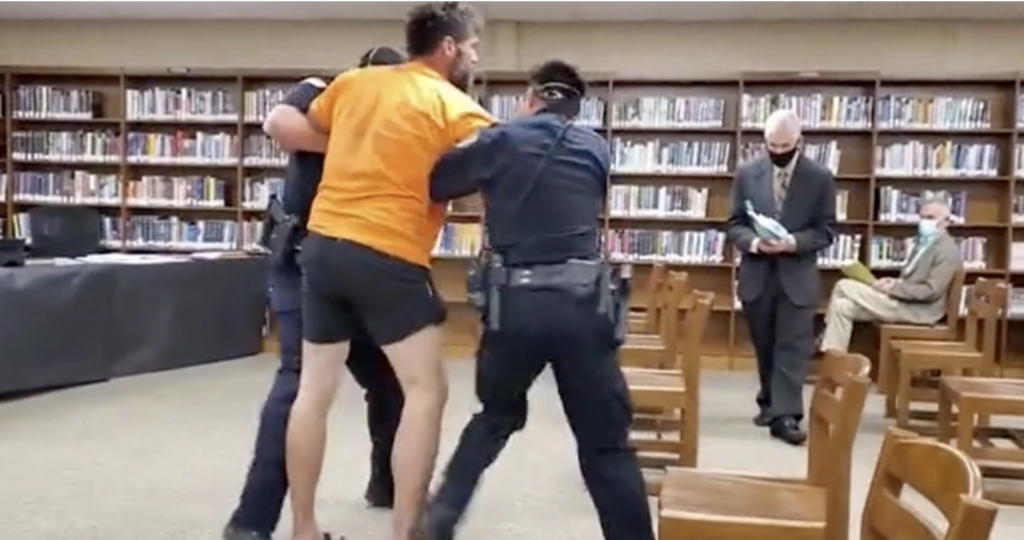 ‘Force me out. You’re going to have to drag me out’

A South Dakota man was forcibly removed from a school board meeting by two police officers after he refused to put on a COVID face mask.

Multiple attendees filmed the Mitchell School District meeting as the pair of cops approached Reed Bender, who sat at the front of the room without a mask.

As the officers entered the room to confront Bender, attendees can be heard asking, “Are you serious? You’re seriously gonna do this? This is embarrassing.”

“You’re going to have to drag me out, guys,” the disgruntled father told the officers.

“I really don’t wanna,” one cop said before Reed cut him off, saying, “I know you don’t want to do it.”

Pointing to the other officer, Bender added, “I know this guy doesn’t want to do it, but you have to follow these fools’ rules, right?”

The policeman told Bender it’s the district’s policy and the father responded by once again saying they’d have to drag him out.

“You are sowing discord in our communities at every level. It’s disgusting,” the father said to the board members sitting off-camera.

After failing to come to an understanding, the officers grabbed Bender by the arms and dragged him out of the room while attendees voiced their disapproval of the physical removal.

Reed struggled with the police as they attempted to cuff him and take him out of the building, even threatening to tase him.

“He just wants to have a say in what’s going on… We pay school taxes,” a woman recording the incident shouted, telling Reed, “We all believe in what you do.”

Other parents agreed, one saying, “This is a joke,” and another noting, “He was sitting at the front, furthest away from anybody else in here.”