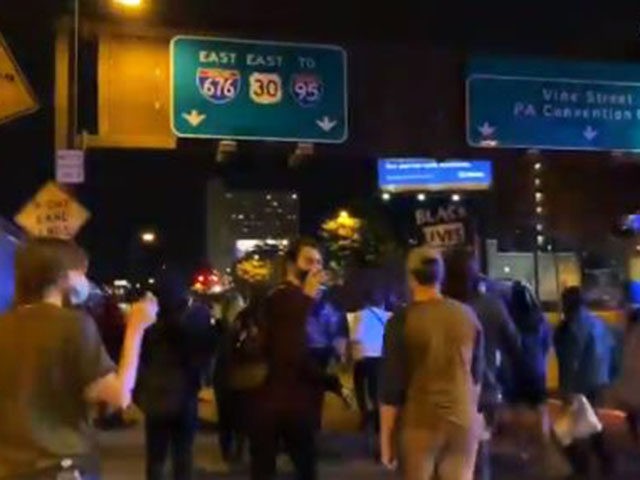 Protesters took to the streets of Philadelphia on Tuesday evening in response to President Trump’s visit to the city and attempted to block roads, weaving through traffic as part of the protest and interrupting restaurant patrons.

Demonstrators held signs and chanted “Trump Pence out now” in the streets in response to the president’s participation in a town hall event at the National Constitution Center. They reportedly attempted to block the highway and tried to stop a police vehicle moving in the same direction. According to the Daily Caller’s Shelby Talcott, demonstrators allowed the officer to continue on after he explained that he was doing so to ensure their safety:

Anti and pro-Trump protests are beginning here in Philly. The protests are not allowed into the park, one officer said. Tons of police surveying the scene pic.twitter.com/Huprnw9N06

The crowd is marching through traffic around the city, which is now at a standstill pic.twitter.com/3IZwaiP8Bp

The crowd stopped in a park for a vigil of sorts. Still peaceful, but now there’s a disagreement about what to do next pic.twitter.com/rPmFNk9mjY

Protesters are disagreeing about whether to march, disperse, shut down streets etc: pic.twitter.com/nLLlIS49r6

Nonetheless, another video shows protesters weaving through traffic in the city, which remained at a standstill. Some climbed on top of a bus stop as the crowd chanted, “This is what democracy looks like”:

Another video shows protesters lecturing a group of restaurant patrons as an officer stands nearby:

Trump supporters were among protesters earlier in the evening. Video shows one demonstrator, wearing a Trump mask, blazer, and pink underwear, seemingly attempting to taunt Trump supporters by stuffing the American flag in her underwear:

During Tuesday’s town hall event, which triggered the protests, Trump defended his leadership style and explained that he is “fighting a lot of forces.”

“Sometimes you don’t have time to be totally, as you would say, ‘presidential.’ You have to get things done,” he said.

He also reiterated that his administration is focused on “law and order.”

“The Democrats are viewing this as a political issue, and I probably agree with them, I think it’s very bad for them, because we’re about law and order,” he said.

“We have to be about law and order otherwise you’re going to see your cities burn. And that’s the way it is, if we can do a plan like Tim Scott’s plan which is really — it goes far enough, but it doesn’t take the dignity away from our police,” Trump added: