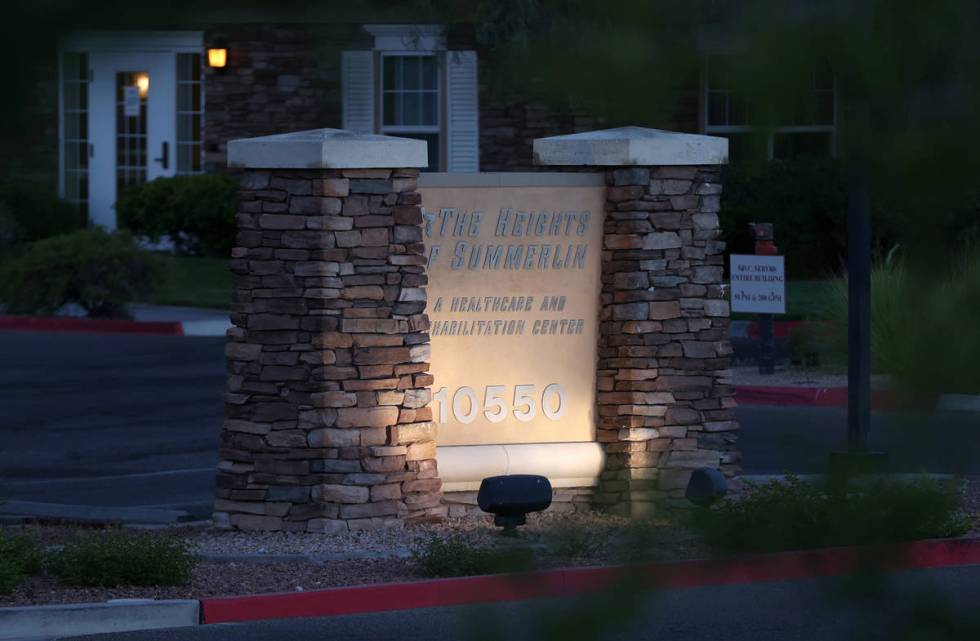 Maria Alimusa moved into The Heights of Summerlin, a licensed skilled nursing home, after a stroke paralyzed the left side of her body.

But as COVID-19 spread through Nevada and entered the facility, she grew increasingly concerned about the care she was receiving at the skilled nursing home.

In this March 16 phone call to her son, Roderick, who lives out of state and was unable to visit due to the home’s lockdown restriction, she pleaded for help getting out:

She died of the virus less than a month later.

The voicemails became more desperate as the weeks dragged on.

Maria Alimusa, a 70-year old resident at The Heights of Summerlin skilled nursing home, was recovering from a stroke when she left a voicemail for her son in California on Feb. 21. Her voice quavered as she predicted her impending death.

“I just want to say I’ve been thinking about you, and I feel like I’m going to be passing soon,” she told him.

Alimusa, a nurse for 30 years, wasn’t worried about the new coronavirus then, as it had not yet reached the U.S. But she told her son, Roderick, she feared she would suffer another stroke because the quality of care at the facility was so poor. She begged him to transfer her to a different nursing home.

Before he could, it was too late.

In one of her last messages, on April 5, she whispered in a raspy voice that she felt she had a cold, though she chalked it up to allergies. But then she developed a phlegm-filled cough.

The symptoms worsened until April 12, when she was transferred from The Heights to Summerlin Hospital Medical Center, where she had once worked.

Only after her death did Roderick Alimusa learn his mother had died of COVID-19, which she apparently contracted in the nursing home.

“I JUST WANT TO SAY I’VE BEEN THINKING ABOUT YOU, AND I FEEL LIKE I’M GOING TO BE PASSING SOON.”

Though The Heights of Summerlin is licensed by the state as a skilled care nursing home, a newly released, 26-page investigative report from the Nevada Department of Health and Human Services and Review-Journal interviews with current and former staff and patients paint a picture of a facility where the most basic safety precautions were ignored — both before and after the coronavirus invaded.

As some patients were discharged without being tested for the illness, families were also left with unanswered questions as to whether their loved ones were counted among the facility’s 28 patient deaths — the most of any other state-run or regulated facility.

One other facility, Lakeside Health & Wellness Suites in Reno, has lost 27 residents and one staff member.

To date, The Heights, which has 190 beds, has logged 150 cases of COVID-19 among 87 patients and 63 staff, according to the state Department of Health and Human Services’ nvhealthresponse.nv.gov website.

Its sister property, St. Joseph Transitional Rehabilitation Center in Las Vegas, also has seen a surge of the disease, recording 57 new cases and five deaths over the past month. It has the second-highest case total among nursing homes at 101 and also is under investigation by the state.

Summit Care LLC is listed as the owner of both properties. It parent company is Pennsylvania-based Genesis Healthcare Inc., which says on its website that it operates different types of senior facilities in 25 states.

Genesis Healthcare announced in late May that it had received more than $300 million in government grants and loans to help it grapple with the coronavirus pandemic that at the time had killed about 1,500 of its residents.

It’s unclear how much of that — if any — went to its Las Vegas Valley facilities.

The administrator of both nursing homes, Andrew Reese, said in a statement Friday that The Heights is a larger-than-average facility, with more than 300 employees and a significant volume of hospital admissions, which increases the risk of transmission. Patients are also still leaving the facility for lifesaving treatment, like dialysis and chemotherapy.

“Despite all of the preventive steps nursing homes are taking, the virus is still making its way into nursing homes across the nation. This is a complex virus that is hard to detect,” he said.

“Our thoughts and prayers go out to those impacted by COVID-19 during this difficult time, especially the families of the three patients that passed away at our facility.”

One of the most alarming deficiencies state investigators found at The Heights was a lack of timely, accurate reporting of COVID-19 cases and related deaths to the state.

Some cases were not reported until the state found an undisclosed positive test associated with The Heights in the National Electronic Disease Surveillance System and ordered the facility to correct any similar omissions, the investigation found.

The same problem occurred with deaths, as The Heights death case count jumped from eight to 18 when the recheck of records occurred, investigators said.

“These additional deaths were already in the COVID death database, but were not known to be associated with the facility until the facility later reported them,” investigators wrote.

Reese, The Heights administrator, disputed that, saying an independent review found the facility had not violated record keeping or reporting regulations.

“The result was that we successfully disputed the findings and the tag (complaint) was deleted,” he said.

Shannon Litz, a spokeswoman for the state Health and Human Services Department, clarified that the complaint was dismissed in reporting to the Centers for Medicare and Medicaid Services’ National Healthcare Safety Network, but not on the state level.

“The state of Nevada inspection and the (statement of deficiencies) provided still stands, and the Division of Public and Behavioral Health is working with the facility,” she said.

Among other findings of the state investigation:

— Staff assigned to the quarantine area of the facility were not fit tested or medically cleared for use of the N95 face masks.

— Staff improperly wore isolation gowns and jumpsuits and did not follow the procedure for disinfecting them before leaving the isolation areas.

— Workers were observed failing to change out of their protective gear after visiting patients.

— One symptomatic resident was spotted in the quarantine area without a mask.

— Patients often went outside their rooms without wearing masks.

Those familiar with The Heights’ operations wonder if management bears the blame.

Employees who were present at the time say that news that the coronavirus had been confirmed in the facility came only via whispers, as Reese kept them in the dark and hoarded protective gear in his office.

“It wasn’t until people spoke up … that they stopped doing that and started implementing another plan,” according to one worker who was furloughed and asked to remain anonymous for fear of retaliation.

A former nurse supervisor, who left in mid-April out of concern over unsafe working conditions and spoke on condition of anonymity, said the nursing home was “not compliant” with safety guidelines for health care workers.

“I said, ‘COVID is going around, so we do need to have that to protect the nurses and foremost the patents,’” said the nurse, who did not wish to be identified by name as she is looking for work.

“They told me that the (personal protective equipment) supply is in his office, and I said why is it in the office? … I don’t need to ask him. He’s supposed to provide us with masks,” she said.

I SAID ‘COVID IS GOING AROUND, SO WE DO NEED TO HAVE THAT TO PROTECT THE NURSES AND FOREMOST THE PATENTS.

“They were not smart enough to get one step ahead. The invisible enemy got there before we could even think. And learning that several of (my patients) died was heartbreaking for me, it really was.”

Reese said that workers have been wearing full gear since March 31 and that there has been no shortage of personal protective equipment since then. The supply is secured to make sure that it is not stolen, he said, and he or the supervisor on duty is responsible for distributing it to employees and patients.

Other workers said that the facility also was so desperate for certified nursing assistants that supervisors had other staff members help out on the floors and answer call lights for patients.

At times, the ex-supervisor said, she alone would work a floor with 30 patients.

Reese denied any manpower shortage, saying, “At no time during the outbreak have we had any material staffing issues as (the number of patients in the facility) was also impacted.”

The facility is advertising job openings for four nurses and two certified nursing assistants on its website.

Patients who stayed at The Heights in the midst of the coronavirus outbreak said they also were not surprised that the disease ran rampant.

Geraldine Garcia, 74, was admitted April 4 for a broken ankle and checked herself out after 10 days.

She said she was not given a mask until April 12, and she alleged that on multiple occasions a nursing assistant changed her diaper with his mask below his chin.

Other times she was left in a wet diaper, sometimes for four hours, she said. Once, she held herself up in a bedpan for 40 minutes before somebody came to help.

She overheard workers say that a man living at nursing home had died from the coronavirus.

“I thank God that I yelled and told them I wanted out of there. I just couldn’t take it no more,” Garcia said. “I could have been one of those that was stuck in there and maybe died.”

Other families were not so fortunate.

Phyllis Wyant, who had a small stress fracture in her back, needed six weeks of rehabilitation. But instead the 80-year-old was discharged with a cough after just four days.

The facility never responded to questions from her family on why she was discharged early, they said.

The day after she returned home, Wyant called her daughter, Tracy LaMonica, and told her, “I don’t feel right.”

Wyant was taken to Summerlin Hospital, where she became very weak. The coronavirus claimed her life on April 18.

“It went from a cough to pneumonia to COVID to dead in five days,” LaMonica recalled later. “I definitely feel like they gave it to her and withheld (that information) from us.”

Another former Heights resident, 98-year-old Faye Brown, also died at a hospital the same day. Her daughter-in-law, Shelly Robinson, said they were “never, not once” told that there had been COVID-19 in The Heights.

Robinson said her family received a call from staff at 4:30 a.m. and were told that Brown’s oxygen levels were low and she was unconscious and couldn’t be revived. She was pronounced dead shortly thereafter at the hospital.

Later that day, the family stopped by the nursing home and were told that there wasn’t staff available to help pack up her belongings.

Instead, they invited family members in, gave them masks, took their temperatures and gave them three hours to pack stuff up, Robinson said.

That all changed the when they returned the next day. “They wouldn’t let us in because it wasn’t safe,” she said.