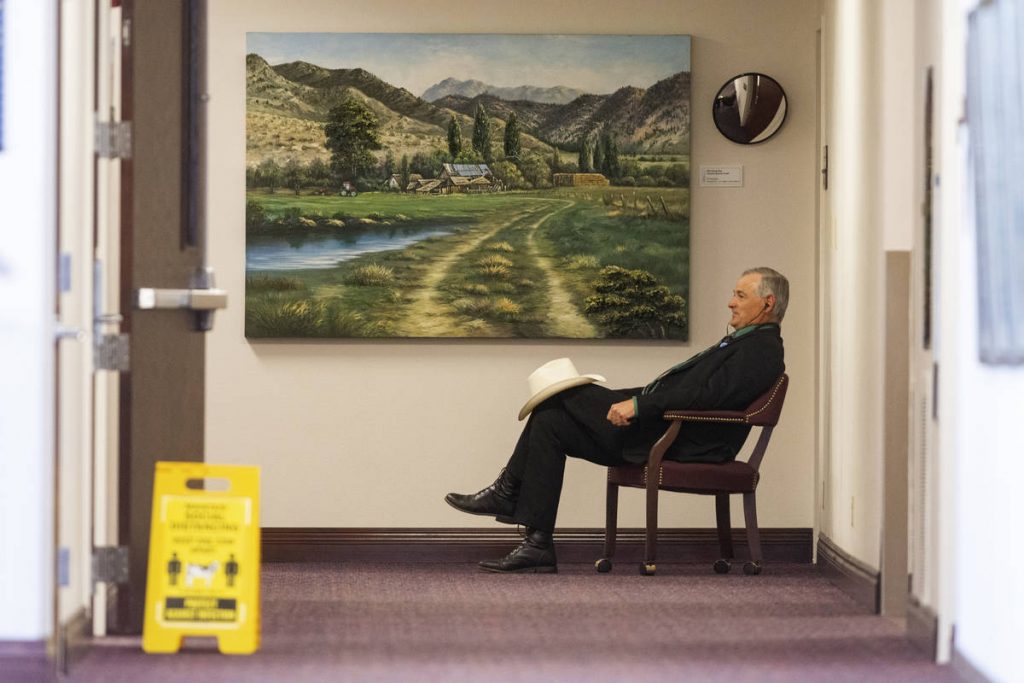 Nevada lawmakers hit the ground running Friday with the opening of the Legislature’s second special session of the summer, moving quickly on measures to change mining taxes and provide for pandemic-driven mail-in voting in November.

Lawmakers also took up measures that would stay court eviction proceedings in favor of alternate methods of resolving landlord-tenant disputes. Also introduced Friday: a police reform bill that includes a ban on chokeholds.

Amid calls for police reforms in the wake of the killing of George Floyd, a Black man who died after a Minneapolis police officer kneeled on his neck for nearly nine minutes, Nevada lawmakers on Friday unveiled the first bill of the special session to address police conduct.

The legislation would ban police use of chokeholds or any maneuver that restricts a the flow of blood to a person’s brain, allows people to keep their cellphones and continue recording their interactions with police and also requires police officers to intervene if they see excessive force being used by a fellow officer. That “duty to intervene” is already required by policy for most of Nevada’s large police departments.

The chokehold ban would seemingly encompass the controversial lateral vascular neck restraint, which came under scrutiny in Las Vegas after Tashii Brown was killed in 2017 after a Las Vegas police officer put him in a similar hold for more than a minute. Police recently approved a $2.2 million settlement for Brown’s family.

Lawmakers are also expected to take up a bill that would undo many of the protections that the Legislature approved for police officers in the 2019 session with Senate Bill 242, although that bill has not been released yet.

Holly Welborn, policy director for the American Civil Liberties Union of Nevada, said the ban on chokeholds would be “a huge win and a huge step forward in our state.”

But Welborn said the bill could go further in terms of accountability, noting that it doesn’t carry any penalties if officers don’t abide by the requirements.

Lt. Will Huddler, chairman of the Las Vegas Police Managers and Supervisors Association, questioned why lawmakers in Nevada are pushing for these changes based on what happened in Minneapolis, noting that Metro underwent an extensive review on the department’s policing patterns and practices by the U.S. Department of Justice less than a decade ago.

That approach was praised as a national model for better law enforcement by one of the nation’s top police accountability experts.

Huddler said he hopes that lawmakers will slow down, take time to talk with law enforcement members and use empirical data to make their decisions.

Specifically, he said, he has issues with the chokehold ban. He said Metro changed its policy to allow vascular neck restraints to be used only in deadly force situations. Huddler said “the state should follow suit and stop there.”

The supervisors union had a conference call with Assembly Speaker Jason Frierson, D-Las Vegas, Huddler said, and noted that Attorney General Aaron Ford, who previously sent out a list of 73 policy ideas for police reform, was receptive in conversations to concerns.

But Huddler said that attempts to talk with Senate Majority Leader Nicole Cannizzaro, D-Las Vegas, who originally sponsored SB242 in 2019, have not been fruitful and that she has not returned any calls.

The Senate took up Senate Bill 1, which would allow courts to stay eviction proceedings for up to 30 days in favor of alternative dispute resolution between landlords and tenants. The move comes amid fears that the state’s courts could be overwhelmed by eviction cases when a moratorium on evictions expires Sept. 1.

The state treasurer’s office has forecast that as many as 135,000 tenants are at risk of eviction. The nonpartisan Guinn Center puts the estimate as high as 142,000 tenants, or as many as 327,000 Nevadans.

“I think the eviction problem facing this state presents enormous hardships for landlords as well as their tenants, and this is a step that we hope the court system can initiate to try to mitigate those hardships,” state Supreme Court Justice James Hardesty told lawmakers in presenting the bill. “There’s lots of things that can come from mediation. And so I think that what is important here is the flexibility of an impartial system that allows the parties to address alternatives and consider what is best for them in their own situation.”

The item passed out of committee and awaits a vote there.

Later in the afternoon, the Assembly took up Assembly Bill 4, an omnibus measure modifying election procedures during periods of declared emergency in Nevada such as the current one, which was declared in March in response to the COVID-19 pandemic. It would apply to the November election. After more than five hours of testimony and discussion, the Assembly approved the measure on a party-line vote, 29-12.

Its various provisions are geared toward having the state conduct a mostly mail-only election. It would make it easier for people to vote without physically going to a polling place; create more flexible procedures for the acceptance of mail-in ballots, including the collection, or “harvesting,” of ballots for drop-off; and make changes to help elections officials tabulate the vote.

It also would allocate $3 million in federal pandemic assistance to pay for mail-in ballots for this year’s general election.