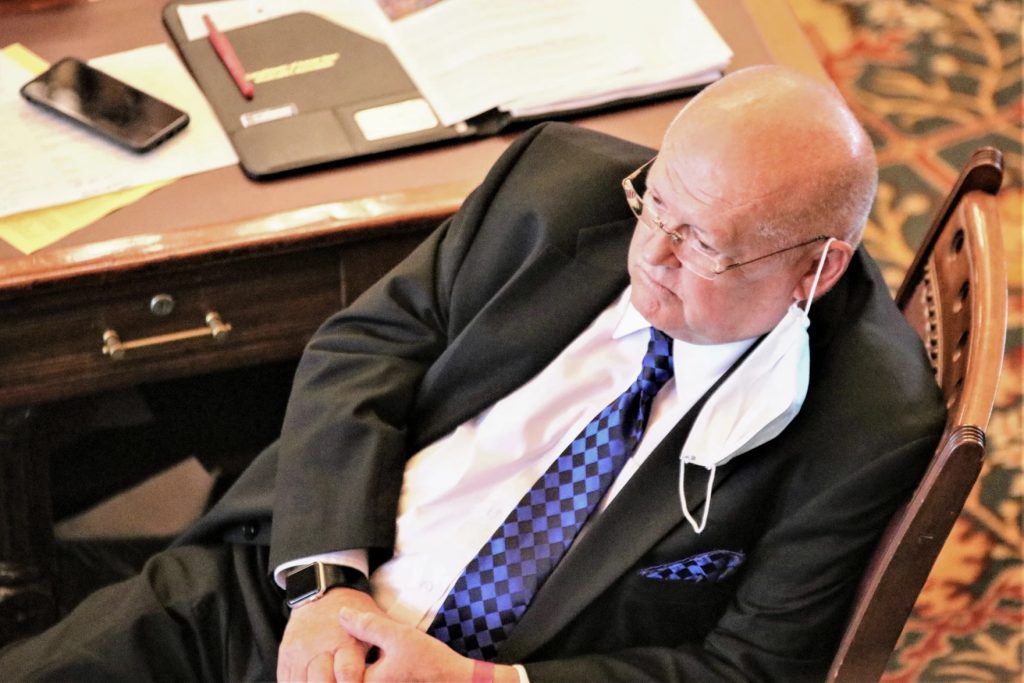 Topeka, Kan. – Control of the Kansas Legislature could turn on dozens of down-ballot races in the Aug. 4 primary election, in which many of the contests, particularly for the Kansas Senate, pit conservative Republicans against moderate incumbents.

In Republican Senate primaries, moderates facing their first re-election test since 2016 can no longer use former Gov. Sam Brownback as a foil. And while taxes remain an issue, two perhaps counterintuitive issues are at the core of this year’s legislative contests: Medicaid expansion and abortion.

“Medicaid expansion definitely hinges on this election and there’s no doubt that women’s reproductive rights also hinge on this election,” said Michael Poppa, executive director of the Mainstream Coaltion, a Johnson County group formed in the 1990s to counter “extremism” in politics.

Democratic Gov. Laura Kelly and a majority of lawmakers support expanding Medicaid health care coverage to hundreds of thousands of low-income Kansans. But conservative Republicans refused to bring the issue to a vote in the 2020 legislative session because lawmakers didn’t agree to put a proposed constitutional amendment on abortion before Kansas voters.

The amendment was a priority for anti-abortion groups seeking to counter a 2019 Kansas Supreme Court ruling that said abortion is a protected right under the Kansas Constitution.

And the proposed amendment’s defeat is at the heart of Republican primary battles across the state.

The Senate and the chamber

The race between Sen. John Skubal and conservative challenger Rep. Kellie Warren is among the most closely watched in the primary.

Skubal, a moderate from Overland Park, defeated conservative Jeff Melcher in 2016 by calling for the repeal of tax cuts that triggered a budget crisis under Brownback.

The Mainstream Coalition, the Kansas National Education Association and Stand Up Blue Valley are backing Skubal’s bid for re-election.

Warren, in addition to the anti-abortion group Kansans for Life, has the support of the Kansas Chamber of Commerce, a powerful group that includes Koch Industries among its most influential members.

For the chamber, though, taxes and regulations, not abortion, are most important. President Alan Cobb said in a recent column published in the Topeka Capital-Journal that the organization is backing conservative challengers because current members of the legislature have not reduced taxes on some companies doing business in Kansas.

“We need legislative champions who understand the fundamental role that business plays in the economic health of Kansas,” Cobb wrote.

Recent changes in federal tax laws, Cobb said, raised state taxes for some individuals and companies by a combined total of more than $1 billion. Kelly vetoed attempts to roll back some of those increases, and Republican leaders could not muster the votes to override her.

“These actions are not reflective of what most Kansans want from their state elected leaders,” Cobb wrote.

The chamber and other conservative groups are most active in state senate races because it is their first opportunity to retake seats lost to moderates in the “anti-Brownback election” of 2016, University of Kansas political scientist Patrick Miller said.

“Conservatives are very much on the offensive,” Miller said, adding that it’s an open question whether moderates can withstand the challenge “without the boogeyman of Sam Brownback to run against.”

The chamber is backing challenges to incumbents in seven GOP Senate primaries. In addition to the Skubal/Warren race, those are:

The moderate/conservative dynamic is in play in a Johnson County district that covers parts of Overland Park, Merriam and Shawnee. Conservative Republican Mike Thompson is trying to hold off a challenge from moderate two-term Rep. Tom Cox.

Thompson, a former TV weatherman, was selected to replace former Sen. Mary Pilcher Cook when she resigned in January with a year left in her third term.

Another member of the Kobach circle faces a challenger in the Topeka-heavy 20th District. Conservative Sen. Eric Rucker was a former top aide to the ex-secretary of state and was selected to fill the remainder of former Sen. Vicki Schmidt’s term when she was elected insurance commissioner in 2018. Rucker is being challenged by moderate Rep. Brenda Dietrich, the former superintendent of the Auburn-Washburn School District.

Dietrich, like many other moderate Republicans, is getting support from American Energy Action, a political action committee formed just this month by companies that operate wind farms in Kansas. 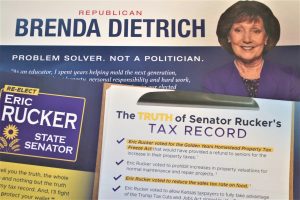 Jim McLean
A mailer from the Dietrich-Rucker race.

Conservatives are also running to unseat moderate incumbents in a handful of Kansas House races, including a Johnson County district that includes parts of Leawood and Overland Park.

Rep. Jan Kessinger was one of four Republicans whose vote against the proposed constitutional amendment on abortion kept it from passing. And while he has the support of the KNEA, Stand Up Blue Valley and the Mainstream Coalition, challenger Jane Dirks has the backing of the state chamber and Kansans for Life.

The 8th House District is another pivotal race in Overland Park and Olathe. Republican Rep. Chris Croft was elected in 2018 and has endorsements from the chamber and Kansans for Life. His opponent, Clay Norkey, is backed by the same organizations supporting other moderates.

Moderate Republicans are facing a dual threat, said Miller, the KU political scientist. They are vulnerable to conservatives in the primary, especially in rural districts, and to suburban Democrats in the November general election.

Depending on how things play out, Miller said, the legislature could end up “more Democratic, but also more conservative.”

Jim McLean is the senior correspondent for the Kansas News Service is a collaboration of KCUR, Kansas Public Radio, KMUW and High Plains Public Radio focused on health, the social determinants of health and their connection to public policy. You can reach him on Twitter @jmcleanks or email jim (at) kcur (dot) org.

Kansas News Service stories and photos may be republished by news media at no cost with proper attribution and a link to ksnewsservice.org.