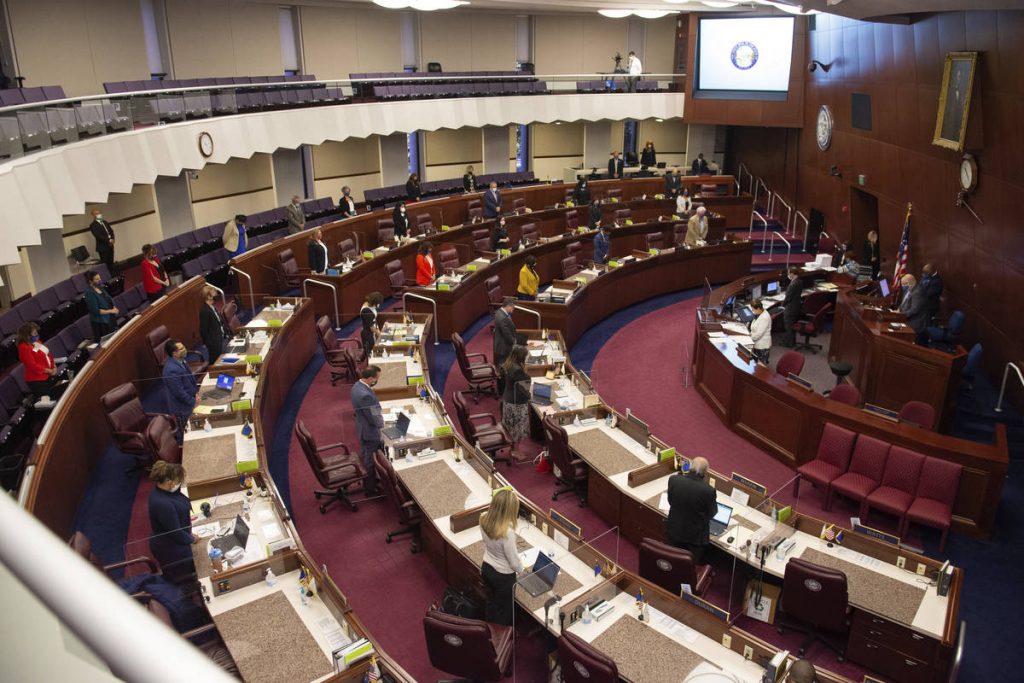 The Nevada Legislature’s second special session of the summer is just on the horizon, with lawmakers expected to tackle a litany of issues from reforms on policing and elections to ways to protect workers amid a global pandemic.

That second special session is expected to start as early as Thursday, although Gov. Steve Sisolak has yet to make a formal proclamation to convene lawmakers in Carson City as of Wednesday morning.

The Legislature convened for its first special session on July 8 to address the state’s $1.2 billion budget hole. That session last 12 days as lawmakers discussed but ultimately failed to pass any revenue increases.

Sisolak and Democratic legislative leaders, who control both chambers, have indicated at least in broad strokes what they want to address during the policy focused session. Exactly what lawmakers will take up will become more clear once the proclamation is issued. Bills introduced in special sessions in Nevada must be related to the items listed in the governor’s proclamation.

Here’s what to expect from the upcoming special session:

The push for police reforms has erupted across the country in the wake of the George Floyd’s death while in Minneapolis police custody in late May. Nevada is no different, with advocates calling for a slew of police reforms, from banning chokehold and other neck-restraining tactics to calls for more transparency and data on police interactions.

Holly Welborn, policy director for the American Civil Liberties Union of Nevada, said that the condensed lawmaking session isn’t likely to bring about the broad policing reforms that advocates might be hoping for. But enacting some of the reforms, Welborn added, would show “a commitment from lawmakers to foster change.”

One of the biggest targets for reform advocates in Nevada is Senate Bill 242 from the 2019 Legislature, which they say has made it even more difficult to hold officers accountable.

The measure drew broad bipartisan support at the time, and passed in the state Senate unanimously, and on a 36-3 vote in the Assembly. Just over a year later, advocates say the bill needs to be completely repealed.

During the a hearing on the bill during last year’s Legislature, Democratic Senate Majority Leader Nicole Cannizzaro, the bill’s sponsor, told fellow lawmakers that the bill “attempts to set a level playing field for peace officers who are investigated by their employers,” and noted that it added certain protections for the officers, including not being able to reassign officers without their consent and ensuring that officers can have a union representative present if being questioned by a superior.

The new law also made it so that statements made by officers during internal investigations can’t be used against them in civil cases unless the officers allow it to be used. It also put a one-year statute of limitations on any alleged misconduct that doesn’t rise criminal charges and bars departments from reopening internal investigations unless new evidence is presented.

Assemblyman Tom Roberts, R-Las Vegas, who retired from the Las Vegas Police Department as assistant sheriff in 2018, said he’s heard from officers who work in the department’s internal affairs bureau who have said the statute of limitations on misconduct “has been an issue.”

But Roberts said he doesn’t think a full repeal of the bill is in the works at this point.

“I think it’s going to be a tweak,” Roberts said.

Asked about possible changes to that legislation earlier this month, Cannizzaro said that there was never any intent to “create a situation where we cannot hold police officers accountable.”

The bill, she said was about making sure workers are treated fairly by employers, but said “we also know that we have to do better, we have to do more to make sure people can have faith in the community that protects them.”

Democratic leadership in the Assembly and the Senate have been mum on exactly what other law enforcement policy issues will be included in the special session.

Frierson, the Assembly speaker, said during a press conference last month that he wants to see more data on race and police stops in the state. At the same conference, Assemblywoman Danielle Monroe-Moreno, a retired corrections officer, proposed increasing the amount of times law enforcement personnel must undergo psychological evaluations.

Advocates meanwhile are asking for an outright ban on police chokeholds and other neck restraints, such as the lateral vascular neck restraints — a technique that came under scrutiny after the death of Tashii Brown in 2017. Brown died after an Las Vegas police officer put him in a similar hold for more than a minute. The department recently approved a $2.2 million settlement in a lawsuit filed on behalf of Brown’s children.

Lawmakers are also expected to consider policy that could give the state attorney general’s office some oversight and investigative power over local police departments. That would likely include so-called “pattern or practice” investigations, which would focus on systemic problems as opposed to individual officers, similar to a review conducted by the U.S. Department of Justice into the Las Vegas Metropolitan Police Department’s practices in 2012.

Sisolak said earlier this week that the special session is likely to address how the general election will be conducted, but hasn’t offered many details just yet.

Secretary of State Barbara Cegavske said last week that she is planning for the state to return to in-person voting for the November general election after utilizing a nearly all-mail primary as a precaution to avoid spread of the coronavirus. Cegavske said her office doesn’t have the $4 million to $5 million needed to conduct another all-mail election like it did for the primary. The state received about $5 million in federal relief to help offset those costs.

Republicans, including President Donald Trump, have pushed back against sending absentee ballots to all voters arguing that it would lead to increased voter fraud, a claim that is largely unfounded and was twice rejected by a Nevada federal judge in a lawsuit challenging the state’s mail-in primary model.

Voting rights advocates worry that shifting back to an in-person election would limit voter access and are pushing for the Legislature to allow for a hybrid system that includes sending all active voters a ballot with pre-paid postage as well as expanded in-person voting to avoid the long lines seen during the primaries.

There also could be a push to allow for some form of ballot harvesting in Nevada, which would effectively allow people to gather and turn in ballots on behalf of others who are not related to them. Advocates argue that it would be beneficial for tribal nations in the state who often don’t have traditional addresses.

On the final day of the first special session, which focused entirely on addressing the state’s $1.2 billion budget deficit, Sisolak noted that the second special session would include policy issues relating to “working to ensure Nevadans, businesses, workers and the unemployed have the support they need” during the pandemic.

Sisolak has said that he intends to address the issues relating to the state’s overwhelmed unemployment system during the special session by “removing statutory barriers” that are hindering the program’s efficiency. But it’s not clear exactly what that will look like or how much it will speed up the process.

When it comes to businesses, he has said he wants to stabilize businesses so they do not suffer further financial hits while also establishing some safety standards for workers.

Business groups, including the Vegas Chamber and the Nevada Resorts Association, have pushed for the Legislature to enact liability protections in case workers or customers were to come down with COVID-19, warning that those potential lawsuits could cripple the economy further and force more businesses to close their doors for good.

A coalition of workers unions are pushing back against any such proposal.

“I think it’s outrageous that they would say in a pandemic that ‘we want to free ourselves of any liability,’” said Laura Martin, executive director of Progressive Leadership Alliance of Nevada.

Amid the throes of the economic shutdown, Sisolak issued a moratorium on evictions in late March. For residential renters, that moratorium is set to expire at the end of August despite a continued increase in coronavirus cases, hospitalizations and deaths.

Asked if he’s considering pushing back the date to lift that moratorium, Sisolak said that “we’ll probably be looking at” during the special session, but didn’t provide specific details.