Mike Pence: Nancy Pelosi’s Reaction to Statue Destruction a ‘Surrender to the Mob’ 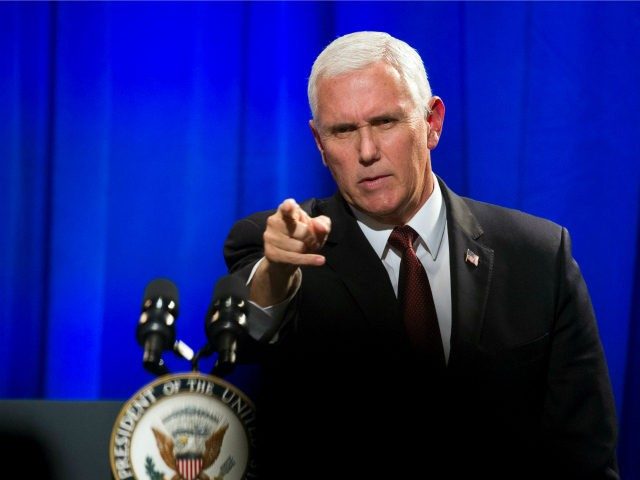 Pence, who sat with Breitbart News for an exclusive interview on his and President Donald Trump’s campaign bus — Pence’s first campaign bus tour since before the coronavirus pandemic hit — expressed the outrage he felt when he saw Pelosi’s comments, just moments before.

“Tearing down monuments is not protests,” Pence said. “Burning churches is not free speech. To have the Speaker of the House tacitly affirm the rule of the mob is unconscionable. For Speaker Nancy Pelosi to say ‘they will do what they will do’ is a surrender to the mob. We’re not going to have it. The American people know the foundation of our prosperity is law and order and the rule of law. We’re going to continue to stand strong for the rule of law against the rule of the mob.”

Earlier on Thursday, asked during her press conference about people who tore down a Christopher Columbus statue in Baltimore, Pelosi brushed concerns aside.

“People will do what they do,” Pelosi replied, when asked by a reporter if it would have been better to take the statue down through legal means rather than having a mob tear it down.

Both Pence and former Vice President Joe Biden — the presumptive 2020 Democrat nominee — are in the Keystone State on Thursday doing a number of campaign stops. Pence earlier in the day hosted a fundraiser with about 150 attendees at a private residence, raising per a campaign official $1 million.

Pence’s interview with Breitbart News came between the fundraiser and a later stop at Rajant Corporation in Malvern, Pennsylvania. Rajant is a recipient of a loan from the Trump administration’s Paycheck Protection Program (PPP), a program that helped keep the American economy tied together through the worst days of the coronavirus pandemic.

Rajant, founded in October 2001 in response to the Sept. 11, 2001, terrorist attacks, is a wireless network company for first responders. Rajant has used its 3D printers throughout the pandemic to make up to 24 masks a day and ship them to those in need of personal protective equipment.

Rajant has also donated its wireless network to medical centers in a number of states where it has offices, including in Pennsylvania and in Kentucky, during the pandemic to help pop-up medical sites acquire the technology they need to treat patients.

During the roundtable at Rajant, Pence gave remarks laying out his and Trump’s vision versus Biden’s, taking sharp jabs at the former Vice President. Pence noted that not far away, Biden was appearing at a Pennsylvania company that also benefited from the PPP program.

More from Pence’s exclusive interview is forthcoming, and the full interview will air on Breitbart News Saturday on SiriusXM 125, the Patriot Channel, this weekend.

Breitbart News accompanied the vice president and his team from the nation’s capital on Air Force Two for this interview and these events.

END_OF_DOCUMENT_TOKEN_TO_BE_REPLACED

Walid Assi was cooking at a Beirut pizza joint on Tuesday night when a huge blast wave pushed him down. The ground beneath him shook. …

END_OF_DOCUMENT_TOKEN_TO_BE_REPLACED

U.S. stock futures rose on Wednesday after Disney squeezed out a quarterly profit despite taking a $5-billion charge due to the pandemic, while investors awaited …

END_OF_DOCUMENT_TOKEN_TO_BE_REPLACED

U.S. private payrolls growth slowed sharply in July, pointing to a loss of momentum in the labor market and overall economic recovery as new COVID-19 …