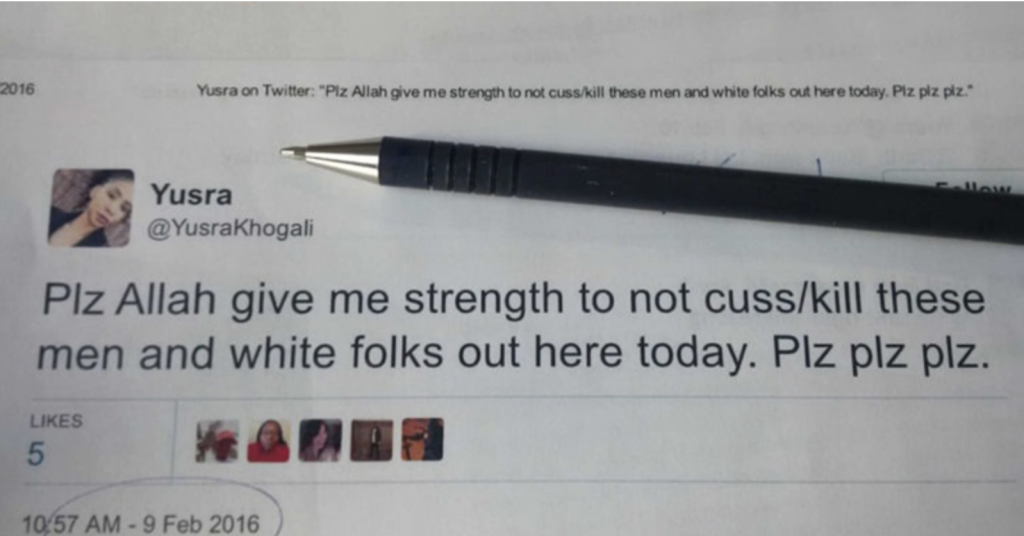 Black Lives Matter leader also prayed to Allah for “strength” to not “kill” white people in a tweet.

A Black Lives Matter chapter co-founder once referred to white people as “recessive genetic defects” and mulled over how they could be “wiped out” in Facebook post written in 2015.

Yusra Khogali, who once dubbed Liberal Justin Trudeau “a white supremacist terrorist,” has been repeatedly scrutinized for her anti-white views as her Toronto Black Lives Matter chapter gained increasing popularity.

According to The Toronto Sun, Khogali once wrote on social media that:

“Whiteness is not humxness,” the statement begins. “infact, white skin is sub-humxn.” The post goes on to present a genetics-based argument centred on melanin and enzyme.

“White ppl are recessive genetic defects. this is factual,” the post reads towards the end. “white ppl need white supremacy as a mechanism to protect their survival as a people because all they can do is produce themselves. black ppl simply through their dominant genes can literally wipe out the white race if we had the power to.”

In 2016, she wrote a now-deleted anti-white tweet that sparked a social media firestorm. She wrote: “Plz Allah give me strength to not cuss/kill these men and white folks out here today.”

She was widely criticized for the tweet which may have left others in significant trouble.

Black Lives Matter has faced criticism for their political bent and anti-whiteness of some of their members.

In a 2015 interview, one of the movements co-founders, Patrisse Cullors, admitted in an interview that herself and some of the leaders were “trained Marxists,” as well as demanding Trump’s resignation in a recent segment with CNN’s Jake Tapper.

In the shortened 2015 clip taken from an interview for The Real News Network, Cullors says, “I think of a lot of things: The first thing I think of is that we actually do have an ideology frame.”

She continues, “Myself and Alicia, in particular, are trained organizers. We are trained Marxists. We are super versed on ideological theories, and I think what we really try to do is build a movement that can be utilized by many, many black folk.”

Another Black Lives Matter chapter co-founder once argued that white people should give up their homes in a piece for LEO Weekly.