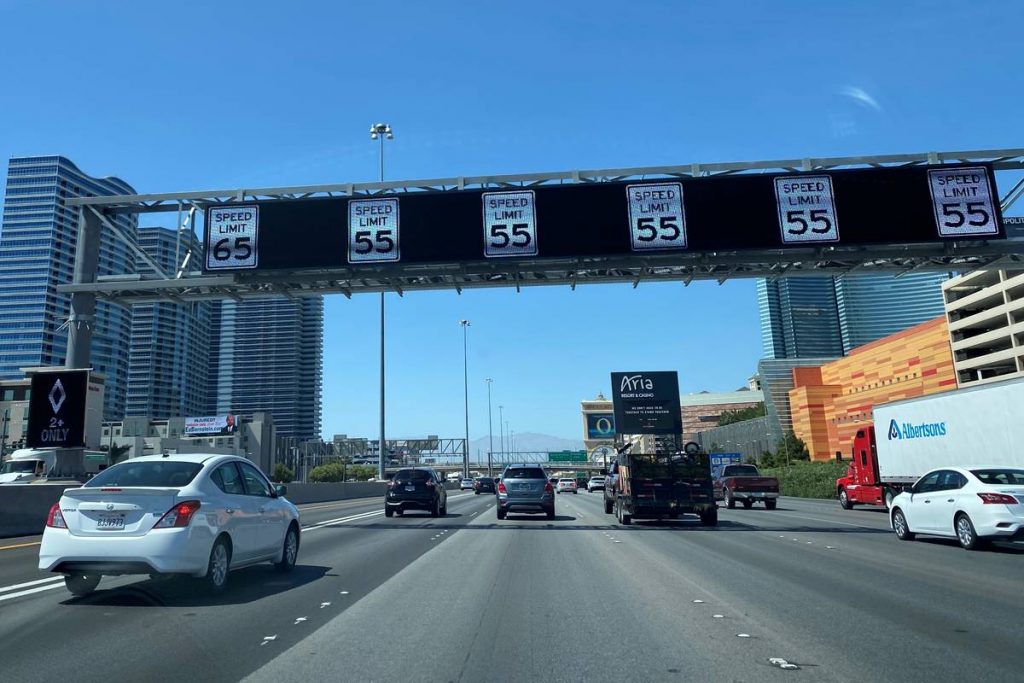 Sammy Hagar told the world on his “VOA” album that he couldn’t drive 55.

Well if the former Van Halen lead singer traveled along portions of Interstate 15 and U.S. 95 in Las Vegas, he would find new dynamic messaging boards that might tell him he can’t drive 45 either. Or even 40 if conditions aren’t right.

The 42 signs of various sizes were installed with the nearly $1 billion Project Neon, which wrapped up last year, but the signs have been fully operational only since late March.

With the newness of the signage, motorists are still unsure about some of the features, namely the ability for speed limits to fluctuate during certain situations.

The signs allow the system to automatically reduce the posted speed limits for vehicles approaching areas of traffic congestion, a crash, construction or a special event.

“What people see on the large signs, speed limits, arrows and things like that is based on the detection system that has been in place for a while,” said Brian Hoeft, director of the Regional Transportation of Southern Nevada’s Freeway and Arterial System of Transportation Operations. “That is the same system that is used to post the travel times.”

The system can detect vehicle speed and volume and uses that data to calculate the appropriate speed limit.

The speed limits can vary up to 30 mph from the usual 65 mph speed limit, meaning they can drop as low as 35 mph, Hoeft said.

Also, if a crash or incident is affecting only general-purpose lanes, the speed limit in the high occupancy vehicle lane could remain higher.

“The HOV lanes could still have more capacity than an impacted general purpose lane,” said Theresa Gaisser, engineering manager for RTC. “There may be up to a 15 mph difference in the speed limits posted over the HOV versus general purpose.”

When a crash or construction occurs, the traffic management center will add an “X” to the affected lane, to alert drivers ahead of reaching that point.

“This is all in the interest of making sure our roads are safe, and we want to make sure we’re providing the proper capacity and we’re trying to address and alleviate congestion as much as possible,” Hoeft said.

“So if the speed can slow down a group of vehicles to harmonize the flow of traffic, there’s opportunities to improve the safety and the efficiency.”

Hoeft and his team are happy with the new messaging signs and the system surrounding them. That said, with traffic counts lower along the freeways because of COVID-19-related impacts, they still haven’t been able to test the new additions fully.

“Freeway volumes in June have picked up, so we’ve seen these signs activated and used a lot more,” Hoeft said. “As that data comes in, we’re able to say, ‘How does this data compare to previous times?’ The one challenge right now is our volumes have been so low that we can’t do a direct volumes-to-volumes comparison yet.”