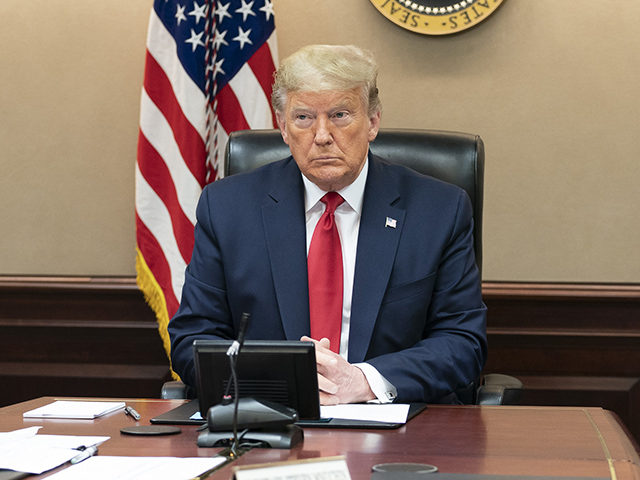 President Donald Trump unleashed heavy criticism for several U.S. governors Monday for allowing rioting and looting in their states, describing them as weak.

“The only time it’s successful is when you’re weak, and most of you are weak,” Trump said in a private video conference in the Situation Room of the White House, referring to the consecutive nights of looting and rioting across the nation.

The intense call lasted nearly an hour, according to reports.

NEW- In ongoing call with Governors- President Trump is scolding their response to the crisis.
Trump blamed protests on “radical left” and then said:

“The only time it’s successful is when you’re weak and most of you are weak.”

1,464 people are talking about this

Details and audio of the call leaked immediately to the press, who started sharing quotes on social media.

Trump warned governors that they would look like fools if they did not take more action to stop rioting.

More: President Trump just berated governors and mayors for how they are handling the protests, calling them “fools,” per person on the call.

A second person on call says Trump’s “fools” comment was more of a warning, saying if the governors didn’t take more action on the protests, they’d look like “fools.”

250 people are talking about this

He urged them to dominate the streets with law enforcement and to call up the National Guard before violence breaks out, rather than simply reacting to reports of looting and rioting.

“We have all the men and women that you need, but people aren’t calling them up you have to dominate, if you don’t dominate, you’re wasting your time, they’re going to run all over you and you’re going to look like a bunch of jerks,” he said.

Mayors and governors, he said, needed to come down hard on violent protesters.

Trump also commented that he saw footage of people driving up in nice cars, looting stores, and driving off.

“They’re all on camera, they’re wise guys, and it’s coming from the radical left you know it, everybody knows it, but it’s also looters and it’s also people that figure they can get free stuff by running into stores and running out with television sets,” he said.

He compared the ongoing riots to the Occupy Wall Street movement of leftists in major cities during the Obama administration.

“This is like a movement, we found out they’re delivering supplies to various places, to various states, you’re people know about it now,” he said. “It’s a movement that if you don’t put it down it will get worse and worse, this is like Occupy Wall Street, it was a disaster, until one day some person said, ‘That’s enough.’”

The president said that weak governors were making America look bad around the world.

“You know when other countries watch this, they’re watching this, the next day, ‘wow, they’re really a pushover,’” he said. “And we can’t be a pushover. And we have all the resources – it’s not like we don’t have the resources. So, I don’t know what you’re doing.”