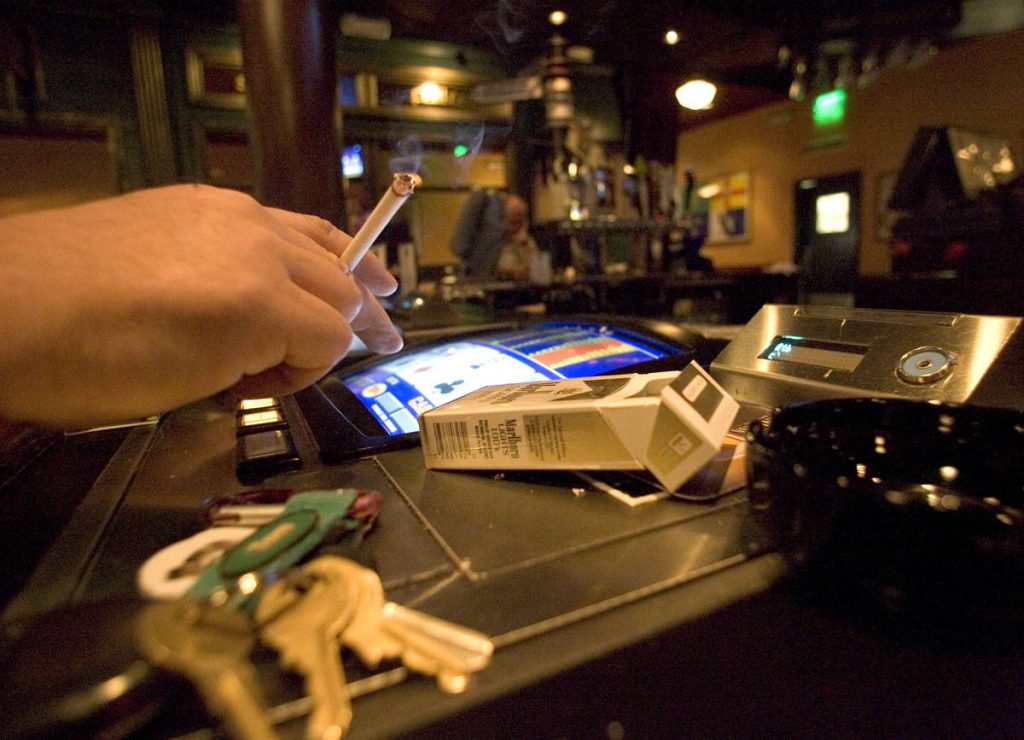 Whenever they open, Las Vegas Strip casinos are almost certain to take steps to protect the health of workers and guests.

But don’t expect them to snuff out smoking.

Despite using the past few weeks to release health and safety policies to put workers and guests at ease, casino operators aren’t taking the advice of health experts when it comes to smoking in casinos.

Smoking could spread the COVID-19 virus, not because of airborne particulates smoking generates but because of a smoker’s likely pattern of fingers to mouth to gaming device, said Rob Jackler, a professor and researcher at the Stanford University School of Medicine.

Anne Manicone, an associate professor of medicine in the Center for Lung Biology at the University of Washington, agreed and asked how to square smoking with the health recommendation to wear face masks.

“Smoking or exposure to secondhand smoke can be respiratory irritants that can lead to coughing, and potentially spread of infection,” she said.

But casino operators don’t seem to be interested in ruling smoking out. Representatives of Southern Nevada’s six major casino companies either declined comment or didn’t respond to requests for comments on smoking.

Health professionals agree that people who smoke are more at risk to experience worse health outcomes in general and if exposed to COVID-19. But the simple act of smoking is a threat as well, according to some health experts.

Jackler said one of the “most crucial public health recommendations is to avoid touching surfaces others have touched and then touching your face, mouth or nose.”

“Engaging in a behavior which involves repeated hand-to-mouth movements in such a setting entails substantial risk,” he said.

Manicone agreed and raised the concern of secondhand smoke.

“We do know that coughing spreads infection via both small and large droplets that can be inhaled by others or land on services that can be spread by touching these surfaces,” she said.

The effort failed, but the new emphasis on companies providing a healthy environment for employees to work has given her new hope that Las Vegas casinos will become smoke-free with COVID-19 on everyone’s minds.

She said several studies have shown that smokers are in the minority, even in casinos.

“If 80 percent of the clientele as well as the workers do not smoke, why are we suffering for the minority?

But smoking inside casinos has long been a draw for international tourists, who tend to spend the most money when they come to Las Vegas.

“Most of the world smokes,” said Anthony Lucas, a casino management professor at UNLV’s Harrah College of Hospitality.

In 2018, there were more than 5.8 million international visitors in Las Vegas, according to the Las Vegas Convention and Visitors Authority. Nearly 237,000 — 4 percent — were from China, making the country the fifth-largest market for international visitation to the city. Data for 2019 is not yet available. According to Euromonitor International, China is the largest cigarette market in the world.

And Chinese visitors are extremely valuable. According to the U.S. Travel Association, they visit the U.S. in strong numbers and spend an average of $6,700 per trip, 50 percent more than the average international visitor.

LVCVA data show Las Vegas visitors from China spent an average of $3,127 per trip in 2018, compared with $819 per trip for the average visitor to Southern Nevada.

“I think part of it is the perception of Las Vegas being a permissive society,” she said.

State gaming regulators have no desire to attempt to ban smoking in casinos. And, even if they did, former members of the state Gaming Control Board and Nevada Gaming Commission contend that the current board has no authority to do it.

“Any amendments to the Clean Indoor Air Act would have to be considered by the Nevada Legislature,” Gaming Control Board Chairwoman Sandra Morgan said in an interview.

The Clean Indoor Air Act was the result of a ballot question approved by Nevadans in 2006. The question banned smoking in certain public places but didn’t apply to areas within casinos, stand-alone bars, taverns and saloons that don’t serve food, strip clubs and brothels, retail tobacco stores and private residences.

“It’s been a policy decision made by lawmakers,” he said.

If banning smoking is a legislative concern, lawmakers wouldn’t be able to consider it until either a special session is called or the Nevada Legislature returns in early 2021.

Dawn Christenson, a spokeswoman for the Nevada Resorts Association, which represents 71 properties statewide, said companies have invested in systems designed to prevent smoke from bothering other customers.

“Nevada Resort Association members are in full compliance with the Nevada Clean Indoor Air Act, and will continue to offer a range of non-smoking amenities,” Christenson said in an email. “Where allowed by law on the gaming floor, our members cater to the diversity of our guests’ preferences by offering both non-smoking and smoking environments.”

“If you look around the world at places that have banned smoking, the first thing you see is a significant drop in the number of customers that will go to the venues,” said former Control Board Chairman Michael Rumbolz, now the president and CEO of Everi Holdings Inc., a gaming equipment manufacturer. “Probably the most recent best example was Britain outlawing smoking in bingo parlors, which, for all intents and purposes, basically, got rid of the industry of providing bingo as an entertainment.”

The same thing happened in Macao.