Beach Towns Have a Message for New York City Residents: Go Away 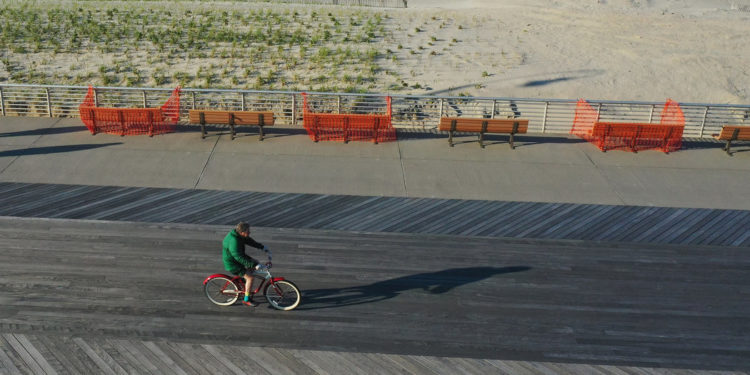 In the Hamptons, the locals have put up barricades to limit parking and deployed enforcement officers to ticket outsiders. Jersey Shore towns have banned short-term leases and Airbnb rentals. The Suffolk County executive’s office taunted Mayor Bill de Blasio: “Do your job. Figure out a plan to safely reopen your beaches.”

Since the coronavirus pandemic began, tensions have repeatedly flared over whether too many New York City residents have decamped to outlying vacation areas, potentially taking the virus with them. But now the region appears on the brink of a full-fledged (and nasty) battle over beaches, touched off by the city’s decision to keep its shoreline closed.

In normal times, the Memorial Day weekend start of beach season sparks a mass migration from the city to Long Island, the Jersey Shore and, to a lesser extent, Connecticut. But the closings in New York City have led to a backlash from local officials in those areas, who say they fear that their shorelines will be overwhelmed by an exodus of sun-starved New Yorkers blocked from their own beaches, which can in normal times attract a million people a day.

To maintain social distancing, beaches across the region are moving to limit access to everyone. On the Jersey Shore, some towns are reducing parking and keeping their iconic boardwalks closed, with seaside restaurants providing takeout and delivery service only. In Spring Lake, beachgoers must now buy daily beach badges in advance; nearby Asbury Park is limiting sales of beach badges and selling them only through an online app.

In Connecticut, state beaches are allowing people to gather in groups of five people or fewer, with 15 feet between beach blankets.

But special rules have also been adopted to keep outsiders away. Westchester County, just north of the city, has restricted its beaches at Playland in Rye and Croton Point Park to county residents. In Groton, Conn., only residents can use Eastern Point Beach on weekends and holidays.

The most sweeping rebuke of outsiders, however, seems to be coming from Long Island, many of whose beaches are convenient to New York City. Officials in Long Beach, whose oceanfront is particularly popular, said that turning away nonresidents was a “lifesaving” measure.

“It’s a shame Long Island has to turn away city beachgoers to protect its residents and ensure safe beaches, but until the mayor gets his act together and makes his own beaches safe, that’s the only responsible move,” said State Senator Todd Kaminsky, a Democrat on Long Island who helped lead the charge for such restrictions.

“As soon as New York City does the right thing, Long Island should welcome back its neighbors as long as safe volumes can be maintained,” he said.