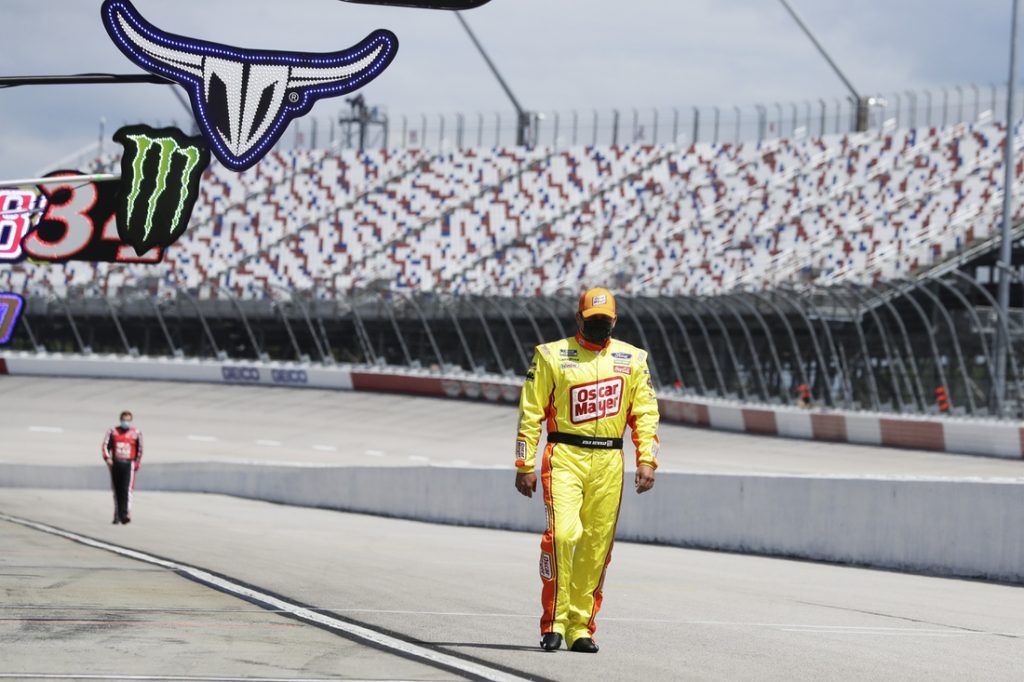 The last time Ryan Newman competed in a NASCAR Cup Series race, his car was sliding down Daytona International Speedway on its roof at nearly 200 mph.

The last-lap wreck in the season-opening Daytona 500 in February fueled speculation about just how badly Newman was injured. The question was not “when” but “if” the 42-year-old would drive again.

When NASCAR ended a two-month-plus coronavirus pandemic hiatus on Sunday at Darlington Raceway in South Carolina, Newman was again strapped into the cockpit of his Roush Fenway Racing Mustang, on his way to a top-15 finish.

“Overall, great to be back in the race car,” Newman said. “Proud of how everybody worked, not just our team, but everyone in NASCAR to break the ice on getting the world back in motion.”

Newman has credited surviving the Daytona crash as a mixture of safety technology and divine favor – he has called his recover “a miracle.”

“Because I don’t remember anything about being in the hospital. I couldn’t tell you who came to visit me,” the Indiana native said prior to Darlington. “But I do remember putting my arms around my daughter’s chests and walking out and holding their hands as I did that. And that tells me that God was involved, that tells me that I was blessed in more ways than one. … I feel like a complete walking miracle.”

Newman started the race in the middle of the 40-car field, the field set by random draws after qualifying was scrapped at Darlington. He spent much of the day running in the top 15 – including some laps in the top 10 – before he spun out with 41 laps to go, leading to his 15th-place finish.

“Really proud of everybody’s effort today to unload the Oscar Mayer Ford as good as we did,” he said. “We started pretty strong and for the first 180 laps or so we were really good, then we got the car too free and we needed it to turn better, but we never got the front to work and made the back loose.”

Newman’s return to racing Sunday wasn’t the only one.

In July of 2017, Matt Kenseth told reporters that he was not being invited back for 2018 by his team owner, Joe Gibbs.

The 2003 Cup champion and owner of two Daytona 500 wins was 45 years old at the time. He said he felt he still had wins left in him, but would another top-tier owner agree?

Turns out, yes, one would.

And on Sunday, he showed that he just may have some Ws left in his bag as he came on late to nab a top-10 finish.

“The race car was way faster than I was today,” he said in a radio interview.

Kevin Harvick, who got his first victory of the season, put it differently. Kenseth never should have quit the sport, the Stewart-Haas Racing driver said.

Kurt Busch, Kenseth’s teammate and who finished third, also had some nice words for the oldest driver on the track.

“When I got out of the car in the infield, they have an old school pylon of where the top-10 finishers are with their car number,” Busch said. “There’s old Matt Kenseth, No. 42, finishing 10th. That’s what he will do every day, all racetracks. I mean, that’s Matt. That’s what he does.

“For him to balance out with (crew chief) Chad Johnston, Ganassi, everybody, first day out to get a top 10, that’s huge. That sets a big tone.”

Kenseth posted two top-seven finishes in 15 races in 2018 for Jack Roush before sitting out the entire 2019 season and without a ride for 2020.

But during the hiatus, promising young driver Kyle Larson was caught during a televised I-racing event voicing a racial slur. Larson was quickly let go by his Chip Ganassi Racing team and the call went out to Kenseth.

Kenseth, who won at Darlington in 2013, returned to the cockpit in good physical shape as he has been running marathons with wife, Katie. But he returned to a series in which the equipment had changed significantly.

Kenseth started 10th in the No. 42 Ganassi Chevrolet Camaro and that is exactly where he would finish – 10th. Or, one spot better than the average finish for Larson in the first four races of 2020.

Both Newman and Kenseth were granted waivers for eligibility in the 2020 playoffs. And with their results on Sunday, appear to be strong candidates for playoff berths.