Hoping to escape coronavirus, city dwellers are fleeing to deserts and mountains 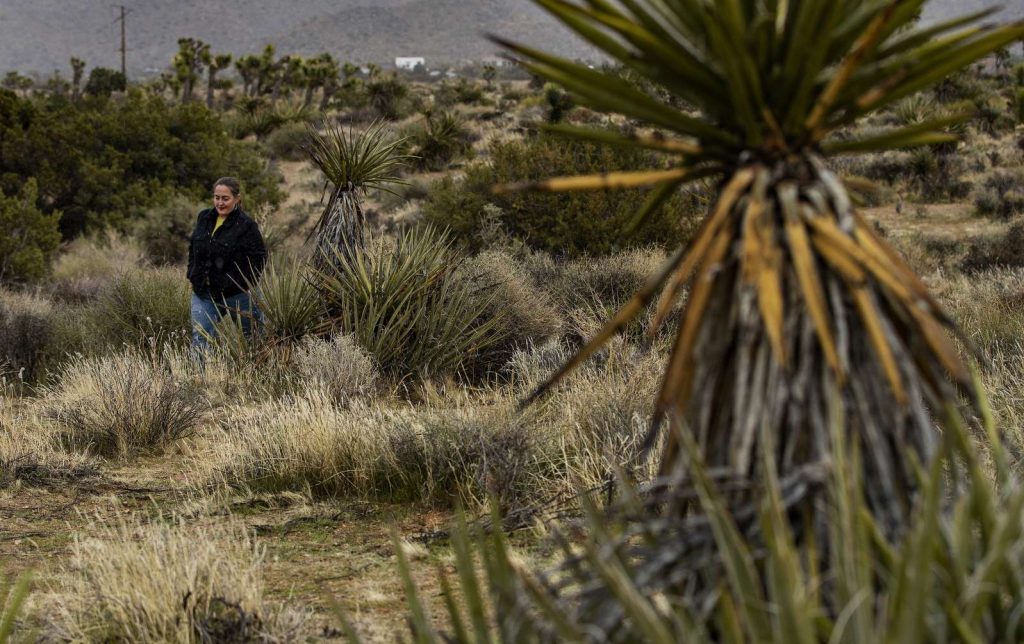 Just two weeks after Gina Grande landed her dream job in San Francisco, authorities ordered residents to stay home in a desperate bid to slow the spread of the coronavirus. Rumors of fistfights breaking out in grocery stores soon followed.

“Overnight, the world took a sharp turn into the Twilight Zone,” Grande said. “I had to get out of there. So, I made a beeline to my boss’ office and said, ‘This is awkward, but can I please telecommute from Southern California?’ ”

She hit the road that night and headed for a three-bedroom second home she operates as a short-term rental on the outskirts of Joshua Tree. Along the way, a distressing advisory came over her cellphone: A client in Los Angeles had just auto-booked the place for three weeks.

“I texted a sincere apology about having to cancel their reservation,” she said.

As the coronavirus pandemic tightens its grip on California’s largest cities, some residents are fleeing urban sprawl and seeking shelter in isolated communities in the Mojave Desert or rugged Sierra Nevada. Their hope, they say, is to avoid possible public unrest and limit their exposure to the virus.

© Gina Ferazzi/Los Angeles Times/TNS Tracy Fisher managed to leave Italy just as the coronavirus was exploding and now enjoys the isolation of her home overlooking the Yucca Mesa on March 18, 2020 in Joshua Tree, Calif. She left her car and all her belongings at the airport in Italy.

These new urban immigrants are not entirely welcome, however. Locals fear their arrival could overwhelm the public health systems of small towns already struggling to cope with the growing crisis, and public health officials worry the movement will lead to greater spread of the highly contagious virus.

In Los Angeles, Mayor Eric Garcetti announced Thursday night that residents were forbidden from moving to or from vacation homes outside the city, along with a number of other health and safety restrictions aimed at fighting contagion.

In Mammoth Lakes, a small Eastern Sierra town that survives primarily on skiing at Mammoth Mountain, the tourism board last week told nonresidents to keep out. “The reason is simple,” the board’s website announced. “As a small, remote mountain community our healthcare facilities lack the capacity to handle a widespread outbreak of COVID-19.”

The migration appears to be driven by fear, and the nation’s sudden shift toward teleworking, which has afforded urban residents greater freedom to roam.

Joshua Tree, a threadbare desert oasis roughly 130 miles east of Los Angeles, has been inundated. Ordinarily, many of the community’s 1,160 short-term rentals would be occupied by national park visitors and desert weekenders, but now they are being snapped up for weeks and months at a time. Some property managers there say the first two questions asked by prospective clients are: “Do you have anything available for several weeks or longer?” and “Do you have internet access?”

“We just confirmed two rentals for long-term stays over three weeks,” said Josh Sonntag, who operates several rental units in the area. “In both cases, social distancing and the ability to work remotely was important.”

The clients declined to comment. But Sonntag said one of the rentals was reserved by a couple who “figured Joshua Tree was a good place to get to know their baby without the stress of a city environment.”

Bryan Wynwood, owner of Joshua Tree Modern Real Estate, said, “Every call I get is related to the coronavirus. Some of them are from city dwellers worried about being stuck in the center of a metropolis that loses control of its basic public services.”

But some of the new arrivals are former residents scrambling to move back into second homes and home-sharing rentals they own in town, which had been generating extra cash by catering to the 3 million people who visit Joshua Tree National Park each year.

Sam Steinman, 28, a professional rock-climbing coach who owns several short-term rentals in Joshua Tree, said he has become alarmed by the desperation in people’s voices. When he recently told two medical workers in San Francisco that he had nothing to rent to them, they offered to pay him more than double the usual price.

“I’ve seen this kind of fear and desperation before in Israel during rocket attacks,” he said. “A friend recently asked if I had a gun he could borrow. I said absolutely not.”

Leroy Westerling, a professor at the University of California, Merced and an expert on risk-management issues related to climate change, suggested that “some of these big-city migrants may be moving into a remote environment they don’t fully understand.”

“A lot of these rentals are in remote areas that are prone to flooding and wildfires,” he said, “and serviced by cash-strapped hospitals ill equipped to handle a surge in population threatened by coronavirus.”

“Personally,” he added, “if I got sick, I’d rather be in San Francisco or Los Angeles.”

In isolated Mammoth Lakes, about 300 miles north of Los Angeles, officials are trying to halt a seasonal trend that normally sees the weekend population quadruple as skiers and snowboarders flock to the Mammoth Mountain ski area.

Now, with the ski area closed due to the pandemic, tourism officials are trying to discourage Airbnb customers and people from out of town who own home-sharing rentals in the area from taking up long-term residence until the threat subsides.

They say medical care is a primary concern. With only one ventilator and 17 emergency beds at the local hospital, patients in dire condition are sometimes flown by helicopter to a hospital in Reno.

Sam Roberts, a Mammoth Lakes resident and president of the nonprofit group Friends of the Inyo, summed up the anxieties in the area this way: “When driving up from Los Angeles, travelers make several stops along the way — for gasoline, for food, to stretch their legs. Trouble is, they could be picking up the virus and bringing it into town with them.”

Yet, the seriousness of the threat posed by the virus seemed to have eluded massive crowds of rock climbers from across the nation who on a recent weekend crowded bouldering hot spots just west of the Sierra Nevada town of Bishop, about 45 miles south of Mammoth Lakes.

Defying social distancing, hundreds of them camped together in the backcountry and piled into local restaurants and watering holes, putting themselves and the community at risk for infection.

“Some of the behavior has been disappointing,” lamented Bishop City Councilwoman Karen Schwartz, who on the following Monday closed a mountain climbing retail store she manages in town. “Health authorities around the world are screaming at us to take this virus seriously in order to avoid becoming another Italy.”

On Friday, Italian officials announced that 627 people with COVID-19 had died in just 24 hours, raising the nation’s total number of coronavirus deaths to more than 4,000.

Thoughts of Italy were also in Tracy Fisher’s mind when she decided to head for a home-sharing rental perched on a mountain in Joshua Tree. The 53-year-old had been in Austria when the coronavirus began to make its grim presence known in Europe.

“In late February, while I was in Vienna, authorities started ordering people who had recently been in Italy to quarantine for two weeks,” she said. “I quickly learned that just mentioning the word ‘Italy,’ or even saying ‘grazia,’ the Italian word for thank you, could transform a warm welcome into fear and horror on people’s faces.”

She arrived back in the U.S. this month to find that fear and confusion over the continuing spread of the coronavirus, combined with travel restrictions issued in several cities and counties, had triggered waves of cancellations at short-term rentals across the nation.

Now, many of those vacancies are snapped up by city residents and owners of shared-home rentals with plans to hunker down for months, if necessary. Their presence may eventually reshape the culture and economy with demands for creature comforts they left behind: shopping centers, wider roads, more schools.

In the meantime, Fisher said the euphoria of being home again is already starting to wear off. Under gloomy gunmetal gray skies on Wednesday, she gazed out at the vista below of washboard dirt roads lined with Joshua trees and modest homes and said, “The isolation here can be more than I can handle.”

“As soon as the coronavirus pandemic clears up,” she added with a smile, “I’m leaving town.”