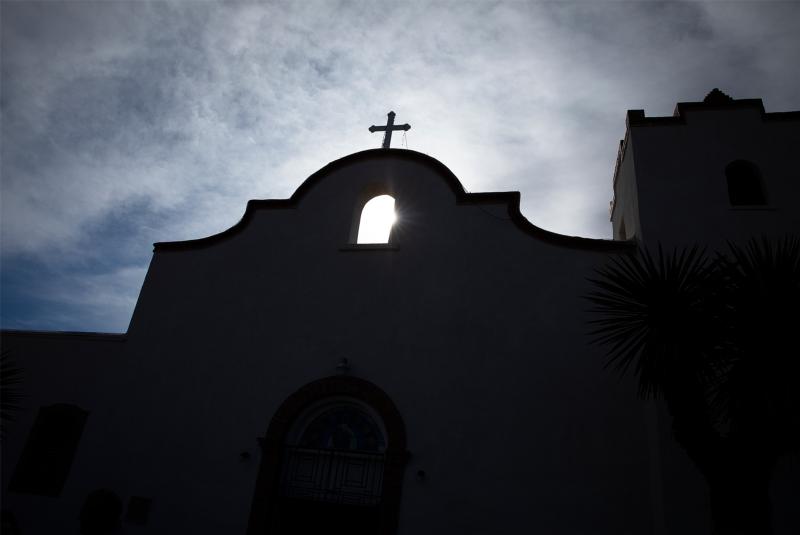 Father Jamie Forsythe has always felt his purpose was to be a priest. He pursued that calling even after he pleaded guilty in 1989 to a charge of attempting to take indecent liberties with a 15-year-old boy in Kansas, serving time in prison, and being laicized — officially removed from the priesthood — by the Catholic Archdiocese of Kansas City.

Forsythe, then in his 30s, was released from prison after less than four months of his one-to-five-year sentence, and eventually found work at Metropolitan Community Church of the Black Hills, a progressive Christian church in South Dakota that primarily serves LGBTQ worshippers. Forsythe was ordained within the Metropolitan Community Church denomination in 1996, according to the Rapid City Journal, and began working at the Black Hills church in January 2000. But when the congregation discovered in 2002 he had failed to register as a sex offender in the state, he resigned from his post and made his way to Wilton Manors, Florida.

That’s where Forsythe found a job at Holy Angels, nestled in a strip mall between a tapas bar and a Peruvian restaurant.

It is part of a church system called The National Catholic Church of North America, but it is not affiliated with the Roman Catholic Church. Forsythe was hired as a priest there in 2005, according to the church. The alternative diocese is home to about 200 parishioners in seven parishes in Florida, Pennsylvania, Michigan and Washington, D.C.

Similar to Roman Catholic faith, the church’s website states it adheres to the seven sacraments and the Sacred Traditions, but it also stresses a message of inclusion. It ordains women, married people and those who identify in the LGBTQ community. It says that nobody is denied Holy Communion or a chance to be a part of the religious community — a welcome extended even to those with sexual misconduct in their pasts.

Forsythe, now 65, offered an explanation for his past child sex abuse in a phone call with CBS News, saying he “was a very unhealthy person” in an institution “that was unhealthy for me.”

“The young man I was involved with was just, like, two months shy of his 16th birthday, which would have been the age of consent in Kansas at that time. But that is neither here nor there,” Forsythe said. “God doesn’t make mistakes … what I see now is that my past experience really makes me a much more compassionate person.”

And he is not the only person with a history of misconduct to be accepted as a priest in the National Catholic Church.

Thomas Rowlands Jr. was not previously in the Roman Catholic ministry before he was ordained by the National Catholic Church and became a pastor at St. Luke’s in Jacksonville, Florida, in 2019. Rowlands was found guilty in North Carolina in 2012 of possessing child pornography while in the military, according to his sex offender registration.

Although he and Forsythe are both registered, they are no longer under confinement, supervision or other court-imposed sanctioning, according to their offender registrations.

There are no warnings or statements about these priests’ pasts from their churches online. Some of the few words about Forsythe on the Holy Angels website are his own: “I know one thing with complete certainty: God Forgives. This is the foundation of my ministry. Even though I screwed up and sinned big time, God says ‘I love you, I forgive you, I restore you and I will use you.'”

The presiding bishop of National Catholic Church, Thomas Sterner, told CBS News that the church knew of the two priests’ histories prior to hiring them. When they accepted them, he said, they made sure Forsythe and Rowlands were “in recovery” and hadn’t faced any additional allegations of misconduct since their initial cases.

Sterner also said that Forsythe and Rowlands are expected to tell all parishioners about their histories of sexual abuse. But he acknowledged that the diocese’s leadership does not follow up to make sure every family and parishioner is aware of the priests’ records. CBS News has not been able to confirm that all parishioners are aware of the misconduct.

“We’re not hiding anything. That’s not us. People know and accept the situation,” Sterner said. “We feel that if they’re willing to do something about their situation, deal with their problems, and they’re doing well in doing that, then we can be of support to them and use their talents to continue to do ministry.”

Mario Petri, a retired therapist who volunteers with the church, said in a phone call with CBS News that the “church is not concerned about people’s pasts.”

“Some of our pastors are gay, some are straight … it’s not really relative, they’re coming for religion,” he said of Forsythe. “He is not wearing it on his sleeve. The basic church knows [about his history of sexual abuse] but he doesn’t announce it every Sunday.”

Petri said there are no signs posted or announcements from the church to inform attendees that the priests are registered sex offenders.

Bishop Sterner said the church relies on “open communication” with parishioners and other clergy, and expects that people will come forward with allegations or concerns of abuse or misconduct if any arise. There are no regulations limiting Rowlands’ and Forsythe’s interactions with children. If there are any indications of sexual misconduct, Sterner said the church “will not tolerate it,” although he did not clarify what actions they would take.

“I would expect that [the families] would put the limits on it themselves when necessary for their own protection and the protection of their children,” Sterner said.

The National Catholic Church of North America is not the only ministry priests have turned to after allegations of misconduct. Father Christopher Lee Coleman was removed from the Roman Catholic Diocese of Brooklyn in 2011 after leaders determined there was a credible accusation he sexually abused a minor, according to a statement by the diocese. He was laicized by the diocese in 2013. The details of the case were not made public and did not go to court.

However, Coleman still presents himself as a priest on social media. His Facebook, Twitter and LinkedIn profiles all depict Coleman working since 2010 at Hermitage of Peace, a religious center in Connecticut that describes itself as a “ministry of prayer and counseling.” The property is affiliated with Our Lady of Mount Caritas, an organization that appears to presents itself as a Catholic monastery but that has no official relationship with the Roman Catholic Church.

The center was sued in 2013 by a woman who donated $200,000 to the organization in 2011 under the belief that it was an official Roman Catholic monastery, as was then depicted on a posted sign outside the estate. The court ruled that the owner of the institution — Sister Mary Peter, otherwise known as Dorothy Jordan — fraudulently misrepresented the organization as part of the Roman Catholic Church, and had to repay the woman plus pay punitive damages.

Hermitage of Peace told CBS News over Facebook that Coleman works to promote their ministry, but would not comment on whether they knew of his laicization prior to working with him.

Julie Byrne, a religion professor at Hofstra University and author of “The Other Catholics: Remaking America’s Largest Religion,” a book that explores independent catholicism, told CBS News that there’s no consensus among experts on how many independent catholic priests have a history of committing sexual abuse; however, she believes the rate of sexual abuse in these institutions mirrors the national average.

According to the Centers for Disease Control and Prevention, one in four girls and one in 13 boys in the U.S. are sexually assaulted during childhood, and in 90% of child sexual abuse cases the perpetrator is someone the child or their family knows.

“Unfortunately sex abuse is endemic in society, and even more unfortunately it is widely tolerated in almost all institutions, including religious ones. From churches to universities to the Boy Scouts, organizations usually don’t deal with sex abuse until they have to by law,” Byrne said. “But even the law itself does not prioritize sex abuse as a crime. If it did, all the lawyers in the country would prosecute nothing but that.”

Roman Catholic dioceses have reported that more than 2,600 priests and other church employees in the U.S. have been credibly accused of abuse over the past several decades. But the exact number of priests with a history of sex abuse is unknown. As the Associated Press has reported, the names of more than 900 clergy members who have been credibly accused of such misconduct are not included on official lists by dioceses throughout the U.S.