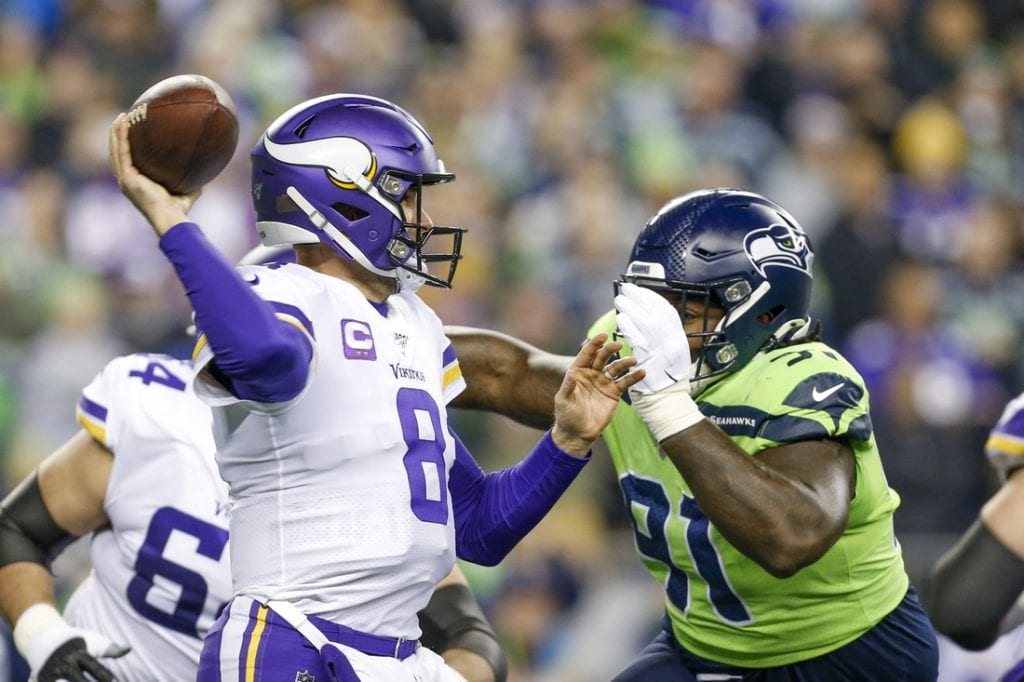 Chris Carson and Rashaad Penny combined for 176 rushing yards and totaled three touchdowns as the Seattle Seahawks held on to defeat the visiting Minnesota Vikings 37-30 on Monday night in a key NFC matchup.

Russell Wilson completed 21 of 31 passes for 240 yards and two touchdowns, including a 60-yarder to David Moore late in the third quarter, as the Seahawks (10-2) moved into a tie with the 49ers atop the NFC West. Seattle holds the tiebreaker edge based on a win at San Francisco.

Wilson, who threw one interception, improved to 9-2 in Monday night games.

The Vikings (8-4) fell a game behind the Green Bay Packers in the NFC North. Quarterback Kirk Cousins, who dropped to 0-8 on Monday nights, was 22 of 38 for 276 yards with two touchdowns and one interception.

The key play came with 8:50 remaining in the third quarter and the score tied at 17.

Minnesota’s Dalvin Cook rushed up the middle, but the ball was knocked loose by Seahawks defensive lineman Rasheem Green and recovered by safety Bradley McDougald at the Vikings 26-yard line. Cook, who entered the weekend ranked second in the NFL in all-purpose yards, sustained a shoulder injury on the play and didn’t return.

Shortly thereafter, Jason Myers kicked his second 29-yard field goal of the game to give Seattle its first lead at 20-17.

Cook finished with nine carries for 29 yards and a touchdown. He also logged three receptions for 35 yards.

With Seattle trailing 17-10 at the half, Penny scored on a 1-yard run to tie it on the Seahawks’ first possession of the third quarter.

Wilson hit Moore with the 60-yard TD pass and Penny with a 13-yard scoring strike early in the fourth to extend the lead to 34-17.

Cousins found a wide-open Laquon Treadwell for a 58-yard touchdown pass early in the fourth quarter to make it 34-24. He hit Kyle Rudolph with a 3-yard score to pull the Vikings within four with 7:14 remaining after a Seattle turnover.

Myers kicked a 36-yarder to cap the scoring with 25 seconds left, and the Vikings fumbled the ensuing kickoff to effectively end the game.

Cook capped Minnesota’s first possession of the game with a 2-yard touchdown run. The Seahawks responded with an 8-minute, 1-second drive, with Carson scoring from 1 yard out.

The Vikings took a 14-7 lead on Anthony Harris’ 20-yard interception return in the second quarter. Wilson’s pass was deflected at the line by Minnesota’s Armon Watts. Wilson attempted to spike the ball out of midair, but he ran into two linemen while doing so with the ball going higher into the air and into Harris’ arms.