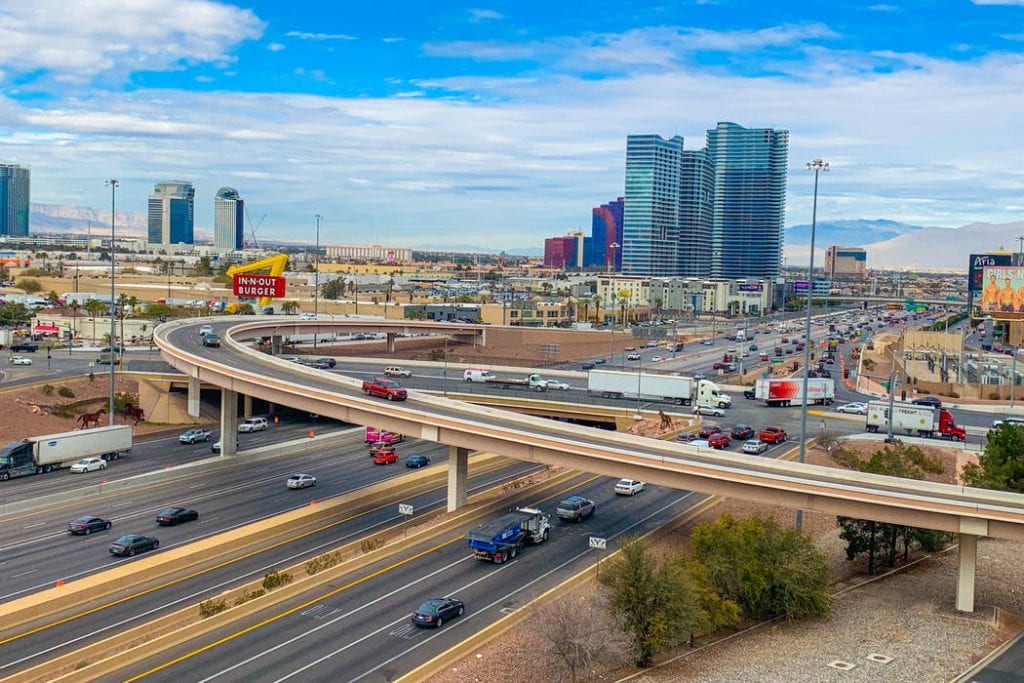 With the final public meeting in the books, a major road project that will help traffic flow to and from Allegiant Stadium is on schedule to begin in 2021, a year after the facility opens.

The $200 million Interstate 15/Tropicana Avenue interchange project has been heralded as a major gameday and event-day road improvement project, but many Las Vegans have complained that the project won’t start until a year after the stadium begins operating and isn’t scheduled for completion until fall 2024.

Game days and major events at the 65,000-person capacity stadium are projected to bring an additional 15,000 to 18,000 vehicles to the roadway system in the vicinity, according to the Nevada Department of Transportation.

The project was in the works even before the Raiders’ relocation to Las Vegas was whispered about, and it does not create any additional fiscal impact on the state Department of Transportation. But the timeline was accelerated once the $2 billion stadium, near I-15 and Russell Road, became a reality.

The project combines two separately planned projects, the Tropicana interchange upgrade and the addition of high-occupancy vehicle lane entrance and exit ramps at Harmon Avenue. Previously planned Hacienda Avenue HOV direct access ramps that were to be combined with the Harmon ramps were scratched after Hacienda was designated for use as a pedestrian walkway for event days.

The project is positioned to be a major north-south approach for stadium traffic, as Dean Martin Drive will be reconstructed at I-15 and will no longer having a signalized intersection at Tropicana, where In-N-Out Burger is located. That area already is highly congested at any given time without throngs of stadiumgoers adding to the traffic load.

Triple right and left turn lanes on the I-15 northbound Tropicana exit ramp and the addition of a lane in each direction on Tropicana on the overpass limit congestion, according to NDOT project manager Jeff Lerud.

During construction, NDOT plans to halt work during major events at the stadium to alleviate traffic issues. Those will include 10 Raiders home games, six UNLV home games and about 46 other events each year, according to projections by the Raiders.

“Effective traffic control is going to be critical to the success of this project,” Lerud said.

The stadium isn’t the only area that will benefit from the reconstruction of the Tropicana interchange, the first major upgrade of the distributor since the 1960s, according to NDOT.

Traffic flow to Las Vegas Boulevard and the resort corridor along the Strip will improve from I-15, along with pedestrian flow to T-Mobile Arena.

The sidewalks on Tropicana over I-15 will be widened from 5 feet to 10 feet, and a new pedestrian walkway will be constructed from the north side of Tropicana down to Frank Sinatra Drive, opening a new access point to T-Mobile.

“There will be stairwells that take you from Tropicana down to Dean Martin on the west side and Frank Sinatra on the east side,” Lerud said.