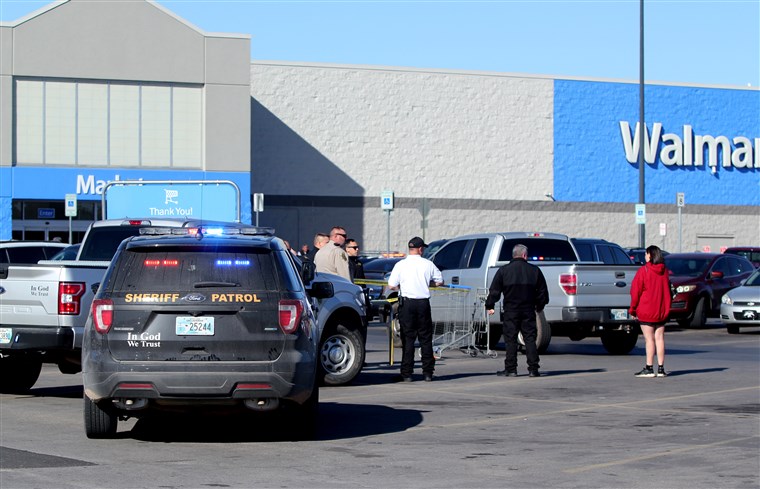 (Reuters) – Three people died in a shooting outside a Walmart store in Oklahoma on Monday morning, law enforcement officials said, the third fatal shooting at the retailer in five months and the latest in a string of gun violence across the United States.

Video of the scene showed heavy police presence around a car riddled with bullet holes in the Walmart parking lot in Duncan, Oklahoma. A white sheet, covering what appeared to be a body, was laid next to it, with blood stains visible on the ground.

The bodies of one woman and one man were found inside the car, with another dead man found outside the car, the Duncan Police Department said on Facebook. A handgun was found on the scene, police said.

The shooter was among the dead, the Duncan Banner newspaper reported citing police.

The incident came the day after another shooting in Fresno, California, that saw at least four killed as people gathered in a backyard to watch a football game, with at least one shooter still unaccounted for.

California was also hit by a school shooting in Santa Clarita last week in which a 16-year-old boy shot and killed two classmates before turning the gun on himself, and a San Diego shooting on Saturday that saw a man kill his estranged wife and three of their young sons before killing himself.

In August, a man killed 22 people at an El Paso, Texas, Walmart and injured 26 others. He is accused of deliberately targeting Mexicans and has pleaded not guilty.

In July, a Walmart employee killed two co-workers and injured a police officer.

Walmart reassessed the security of its stores, adding third-party security or uniformed off-duty police officers at times, following the El Paso shooting and another at a Mississippi Walmart in which an employee shot and killed two colleagues.

In September, following the El Paso shooting, the company said it would no longer sell .223 caliber and 5.56 caliber ammunition that is often used the sort of rifles with large-capacity clips that have been a major factor in some of the nation’s deadliest mass shootings.

The store also asked its customers to no longer openly carry weapons into their stores in states that allow the open carrying of firearms.