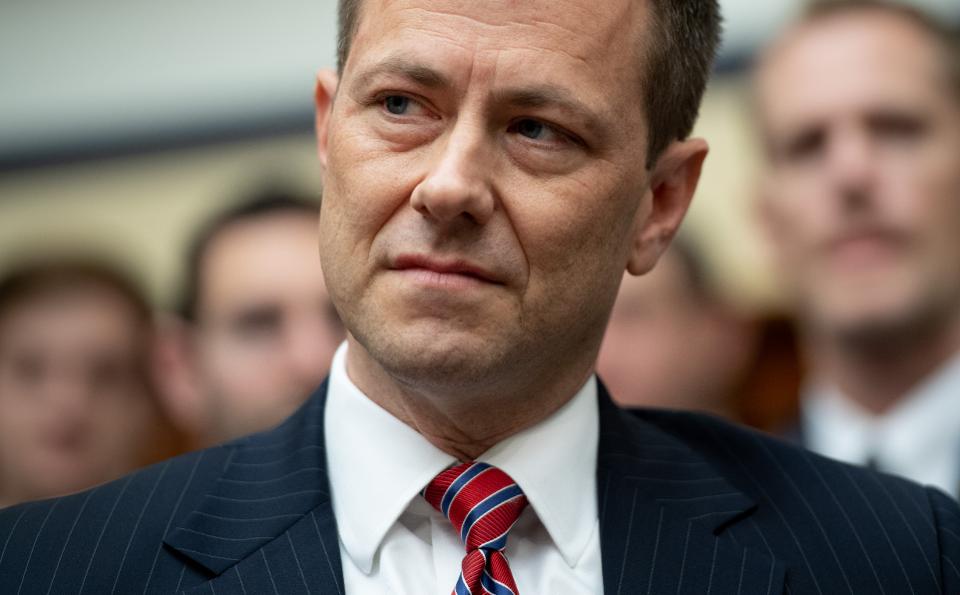 In a July 4, 2016, email exchange with Priestap, Moffa, and unidentified Office of the General Counsel officials, a Daily Beast article titled “Is Hillary Clinton Telling the Truth About Emails?” is discussed in which Clinton is quoted saying that she never sent or received emails with material marked classified.

Strzok: There are three chains totaling 8 or 9 emails which have (C) [classified] portion marks in front of paragraphs. Some have both (C) and (SBU) [sensitive but unclassified] in front of different paragraphs in the same email. During a brief a few weeks ago Jon provided a copy of the emails in question.

All were released in the 30,000 FOIA production. One of the chains contains multiple B1 [national defense or foreign policy] redactions, indicating it is currently classified Confidential; the other two chains were released in full. We do not yet have determinations from State about their classification at the time of writing.

On June 29, 2016, Strzok forwards Page a story about the meeting between Bill Clinton and then-Attorney General Loretta Lynch on the Phoenix airport tarmac just days before Clinton’s criminal investigation interview. Strzok highlights an excerpt in which CBS News’s Justice Reporter Paul Reid called the meeting, “shocking, absolutely shocking” also that, “the appearance of impropriety is just stunning.” The excerpt ends with Reid saying: “[Lynch] stood up to El Chapo, she has taken on FIFA – she is not incapable to telling someone, ‘Look, you can’t come on my plane’ or ‘Look, I don’t want to talk to you.’”

The documents also show that on May 23, 2016, Strzok; FBI Office of Congressional Affairs’ Elizabeth Beers; Principal Deputy General Counsel for the FBI Trisha Anderson; FBI Deputy Assistant Director in the Counterintelligence Division Jonathan Moffa; and another redacted senior FBI official have an email exchange about how to respond to a letter sent from Senator Chuck Grassley to then-FBI Director Comey asking a series of pointed questions focusing on why FBI personnel working on Clinton’s email server case (Midyear Exam/MYE) were required to sign a special non-disclosure agreement (NDA) above and beyond the normal rules in place that govern disclosure of sensitive information by FBI personnel.

Grassley asked for copies of the special NDA and if any agents refused to sign.

Beers notes that some of her communications about the matter were on the “redside” (the Top Secret FBI computer system). Beers also noted that she ran their proposed response to Grassley by the DOJ, which provided “edits.”

On June 3, 2016, Peter Strzok organized an “MYE Scrub” meeting with Page, Moffa and an unidentified official from the FBI General Counsel’s Office.

On June 3, 2016, following the “MYE Scrub” meeting, Strzok emailed then Deputy Director of the FBI Andrew McCabe, Asst. Dir. for Counterintelligence Bill Priestap and other redacted officials, advising them that “PSEU [Policy and Statutory Enforcement Unit] approved memo about 45 minutes ago. They (Toscas, CES [George Toscas, Dep. Asst. Atty. Gen. for National Security Div., Counterespionage Section], and EDVA [US Attorney for Eastern District of Virginia] are having a conference call tonight …”

(The PSEU, among other tasks, advises “senior department leadership about “investigative tools and prosecutorial actions” to obtain information “from or about members of the news media.” The PSEU can “close otherwise public judicial proceedings to the public in federal criminal cases; seek court-ordered use immunity for federal witnesses; subpoena attorneys in federal criminal as well as civil proceedings for information relating to their representation of clients; [provide]authorization to apply for search warrants for the premises or electronic storage devices of attorneys who are the subjects or targets of federal investigations; and obtain authorization to conduct a dual or successive federal prosecution of an individual under the Department’s Petite policy. The PSEU also provides advice when Department of Justice employees have been subpoenaed to provide testimony or to produce evidence in state or federal judicial proceedings.)

On June 7, 2016, Strzok emails his boss, Bill Priestap, saying that that the FBI’s Counterespionage Section “engaged in multiple conversations with Beth Wilkinson [an attorney for several top Clinton aides during the server investigation] concerning the scope and wording of the consent to search the Samuelson and Mills laptops.”

In a June 9, 2016, email exchange, FBI Public Affairs Official Richard Quinn sends a Wall Street Journal (WSJ) article titled “Clinton Emails in Probe Dealt with Planned Drone Strikes” to Strzok and FBI Asst. Dir. for Public Affairs Michael Kortan. The article cites unidentified “law enforcement sources” by saying, “Several law enforcement officials said they don’t expect any criminal charges to be filed as a result of the investigation [of Clinton’s transmission of classified information on an unsecure server], although a final review of the evidence will be made only after an expected FBI interview with Mrs. Clinton this summer.”

Strzok replies: “Not bad at all. I think we’ll be OK. Thanks for all your work on this.”

Also on June 9, 2016, Strzok emailed redacted FBI officials, cc’ing Moffa about a phrase in the WSJ article that concerned him, asking whom they had interviewed that said something similar: “Some [State Department] officials chafed at pressure to send internal deliberations through intelligence channels, since they were discussing whether to push back against the CIA, congressional officials said.”

Moffa replied that he remembered an interviewee saying something like that at a 9AM briefing. Strzok then emails Page privately about it, asking her to “Call me.”

In a June 10, 2016 email exchange between top FBI and DOJ officials that included Strzok, Page, Moffa, McCabe, Priestap, General Counsel James Baker, and Toscas, they discuss scheduling the FBI’s interview of Clinton in the MYE investigation, keepinig in mind “the Boss’s strong desire to get this wrapped up in June.”. The exchange has the subject line “Kendall DOJ contact:”

Strzok: Bill, I’m driving and can provide more detail on the phone, but DOJ is telling Toscas. Without DOJ asking, Kendall [Clinton’s lawyer] tjrew pit a date pf 2 July in NY for the Interview. [Redacted] said that he could not commit to a date and we need to look at the laptops first. Kendall said he would keep the date blocked anyway because it is getting very hard to get on her calendar, even for him.

Baker: I guesss I’m OK with it so long as we clearly state in writing that the date is tentative snd subject to our finishing our review of the laptops [of Cheryl Mills and Heather Samuelson]

McCabe: Keep in mind the Boss’s [presuambly James Comey] strong desire to get this wrapped up in June.

McCabe: So if July 2 is the first thing she has free now, we should grab it.

The exchange concludes with Strzok telling Page, “Also Phase I [redacted] of Samuelson is done. CES (Counterespionage Section) notifying Wilkinson [per terms of consent – that we are moving to Phase 2 [redacted]. Mills laptop still processing, was about twice as large. OTD [Technical Division] thinks that will be done tonight as well.”

On June 21, 2016, Strzok emails to Page a Congressional Research Service (CRS) article about the McDade-Murtha Amendment relating to “Ethical Standards for Justice Department Attorneys.” He highlights in bold a section about the DOJ’s concerns relating to the “No Contact Rule” in many state laws that says a lawyer representing a client cannot discuss his representation of that client with another person involved in the same matter, without approval of the lawyer representing the other person in the same matter.

In a June 21, 2016 email, Strzok informs Priestap that there was a different email domain other than clintonemail.com located on Clinton’s private server (in addition to clintonemail.com):

And slight correction to below [redacted] account was not on clintonemail.com, but a different domain on the same server. We saw the login from the server logs.

In the early morning of July 5, 2016, (the day of Comey’s press conference) there is an email exchange among McCabe, Strzok, Comey’s Chief of Staff James Rybicki and Priestap:

McCabe: Jim will email us once the D [Director Comey] has made contact with [redacted]. That will be the green light. If you are not able to make contact, you can send him a brief, non-detailed email. Please confirm.

Strzok replies: OK, will do.

In a July 5, 2016, email marked “Importance: High,” with the subject line “Read this,” Strzok sends Page a New York Times article titled, “James Comey’s Rebuke of Hillary Clinton Fits a 3-Decade Pattern.” The article discusses Comey’s press conference and claims it demonstrated his “willingness to ‘take the hit’ on a controversial decision.”

“These emails show that neither the corrupt ‘tarmac’ meeting nor Hillary Clinton’s falsehoods about her emails nor anything else would get in the way of the Obama FBI under Comey letting Clinton skate,” said Judicial Watch President Tom Fitton. “The FBI continues to slow roll the release of Strzok-Page materials and we may not see them all until at least 2021. What other documents is the FBI sitting on?”

Strzok and Page were key investigators in the Clinton email and Russia collusion investigations. Strzok was removed from the Mueller investigative team in July 2017 and reassigned to a human resources position after it was discovered that he and Page, who worked for FBI Deputy Director Andrew McCabe, and with whom Strzok was carrying on an extramarital affair, exchanged pro-Clinton and anti-Trump text messages. Page resigned in May 2018. Strzok was dismissed from the FBI in August 2018.

In July 2019, Judge Walton ordered a hearing regarding the rate of production of emails, text messages, and other communications between Strzok and Page. The court scheduled the hearing to discuss: “Upon further consideration, the Court is concerned that the processing rate adopted by the Court may be inadequate.” The court’s July 24 order followed a joint status report by the FBI and Judicial Watch that disclosed that only 6,000 of almost 20,000 responsive records had been processed since May 2018.

In June 2019, Judicial Watch uncovered documents in this case including emails showing the FBI’s attempts to muddle former FBI Director James Comey’s testimony on the Clinton email investigation and collusion between the FBI and the media. Other documents revealed then-FBI General Counsel James Baker instructing FBI officials to expedite the release of FBI investigative material to Clinton’s lawyer, David Kendall, in August 2016. Kendall and the FBI’s top lawyer discussed specifically quickly obtaining the FBI’s “302” report of the interview of Clinton.

Also in February 2019, Judicial Watch made public 215 pages of records from the DOJ revealing former FBI General Counsel James Baker discussed the investigation of Clinton-related emails on Anthony Weiner’s laptop with Clinton’s lawyer David Kendall. Baker then forwarded the conversation to his FBI colleagues. The documents also describe a previously reported quid pro quo from the Obama State Department offering the FBI more legal attaché positions if it would downgrade a redaction in an email found during the Clinton email investigation “from classified to something else.”

In July 2018, Judicial Watch received documents from the Department of Justice revealing Strzok and Page’s profanity-laced disdain for FBI hierarchy and policies. The DOJ, meanwhile, was resisting Judicial Watch’s request for a court order to preserve all responsive Page-Strzok communications. In May 2018, U.S. District Court Judge Reggie B. Walton ordered the FBI to begin processing thousands of pages of previously undisclosed records between FBI officials Strzok and Page.