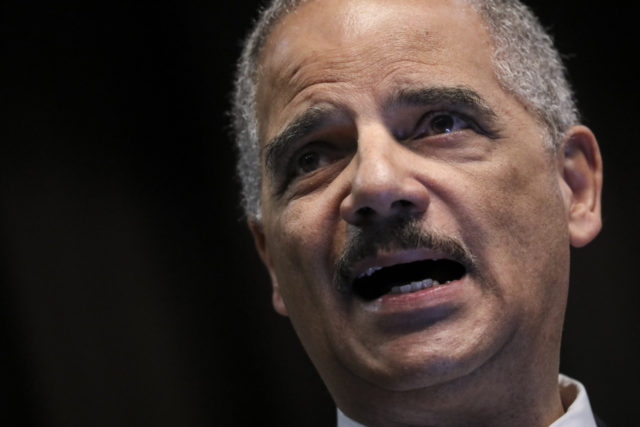 Former U.S. Attorney General Eric Holder is again considering running for the Democrat nomination for president in 2020 after previously ruling out a run, a move that comes as former New York City mayor Michael Bloomberg has filed presidential primary paperwork in Alabama signaling he may be a late entrant to the race.

All of this comes as speculation builds that former Secretary of State Hillary Rodham Clinton, the failed 2016 Democrat presidential nominee, may run again in 2020 as well.

Holder did very publicly flirt with running in 2020 before, even making the rounds to travel to some early presidential states for key speeches, but he ultimately announced earlier this year he would not run. In March 2019, he came out and said he would not be running in 2020 and that he planned to instead focus his efforts on redistricting efforts.

But now, given how weak the rest of the Democrat presidential field is in 2020, and with other top talent showing that the water is definitely still warm, Holder appears to be reconsidering and thinking about getting into the race after all.

Washington Post columnist Eugene Robinson reported late Thursday evening that Holder has been discussing a late entrance into the crowded Democrat field with a handful of close advisers and political consultants:

It gets even more interesting. I hear from a good source that Eric Holder has been consulting strategists about possibly jumping into the Dem presidential race. NYT reports Michael Bloomberg is seriously considering a late entry as well.

3,581 people are talking about this

The news that Holder is reconsidering his decision to bow out on 2020 comes as Bloomberg has filed paperwork in Alabama, which has a Friday filing deadline, to run for president. He has not yet, according to multiple reports, made a decision on whether he will run for president or not, but filing paperwork in Alabama ensures he would have a shot at ballot access there should he mount a national campaign for the Democrat nomination.

Former New York City Mayor Michael Bloomberg is preparing to file paperwork to qualify for the Democratic presidential primary in Alabama, ahead of a Friday deadline. The move would be a first step toward a national campaign, though Bloomberg has not made a final decision to run.

We now need to finish the job and ensure that Trump is defeated — but Mike is increasingly concerned that the current field of candidates is not well positioned to do that. If Mike runs he would offer a new choice to Democrats built on a unique record running America’s biggest city, building a business from scratch and taking on some of America’s toughest challenges as a high-impact philanthropist.

All of this comes as Clinton, whom some have speculated may get in herself, again toyed with the idea publicly during an interview with Andrew Ross Sorkin this week and then tweeted video of the joke:

You heard it here first:

5,849 people are talking about this

Biden’s deep corruption concerns with regard to his son Hunter Biden’s business dealing in Ukraine and China, and potentially elsewhere around the world in shoes yet to drop, have Democrats concerned that a much more radical leftist like Sen. Elizabeth Warren (D-MA) or Sen. Bernie Sanders (I-VT) could win the Democrat nomination.

While the hard left of the Democrat Party led by the so-called “Squad” believes that nominating a leftist socialist like Sanders or Warren would energize the party’s base and bring an army to take on President Donald Trump and his base in November 2020, more establishment Democrats are concerned that Warren or Sanders being the nominee would turn off battleground voters and cede the White House back to Trump in 2020.

Most of the “Squad,” Reps. Alexandria Ocasio-Cortez (D-NY),  Ilhan Omar (D-MN), and Rashida Tlaib (D-MI) endorsed Sanders since the last Democrat debate in October, while the freshman group’s fourth member Rep. Ayanna Pressley (D-MA) endorsed Warren. Members have insisted there is no divide in the group.

Biden’s polling numbers have steadily sunk in recent months, to the point where he has lost the frontrunner status he enjoyed at the beginning of his campaign. Warren has replaced Biden as the frontrunner in many national polls, and especially in several key battleground states. Biden’s numbers keep slipping as the public learns more and more about his son’s position on the board of Ukrainian natural gas company Burisma Holdings, where he was paid more than $80,000 per month.

Questionable Hunter Biden dealings in China, too, have put a spotlight on Biden corruption concerns, all of which in their totality are a nearly daily national news story given the fact that House Democrats have decided to proceed with an impeachment inquiry into President Trump over the fact that Trump asked Ukraine’s new president to investigate corruption including what happened with Hunter Biden and Burisma.

If Bloomberg or Clinton decided to launch national presidential campaigns in the next few weeks, they would have considerable resources at the ready. Bloomberg, a billionaire, has immense financial resources at his disposal, while Clinton as the party’s nominee in 2016 and the former first lady, as well as a leader with a national profile and universal name identification among voters, would quickly be able to assemble the structures necessary to compete in the upcoming primaries and caucuses.

Holder, though, may have a rougher go of it given that he’s never run a national campaign before and does not have the financial resources of Bloomberg:

It gets even more interesting. I hear from a good source that Eric Holder has been consulting strategists about possibly jumping into the Dem presidential race. NYT reports Michael Bloomberg is seriously considering a late entry as well.

169 people are talking about this

Holder does have deep ties to former President Barack Obama, however, and is considered a favorite among the Democrat base given the work he did to help Obama cover up a variety of scandals, including most notably the Operation Fast and Furious scandal.

Holder’s coverup of documents on behalf of Obama, who asserted executive privilege to withhold the information from Congress, led to him being the first-ever and only sitting Attorney General of the United States to be held in contempt of Congress. The U.S. House in 2012 voted Holder into both civil and criminal contempt of Congress over the Fast and Furious scandal, just one of many scandals that plagued Holder’s Department of Justice.