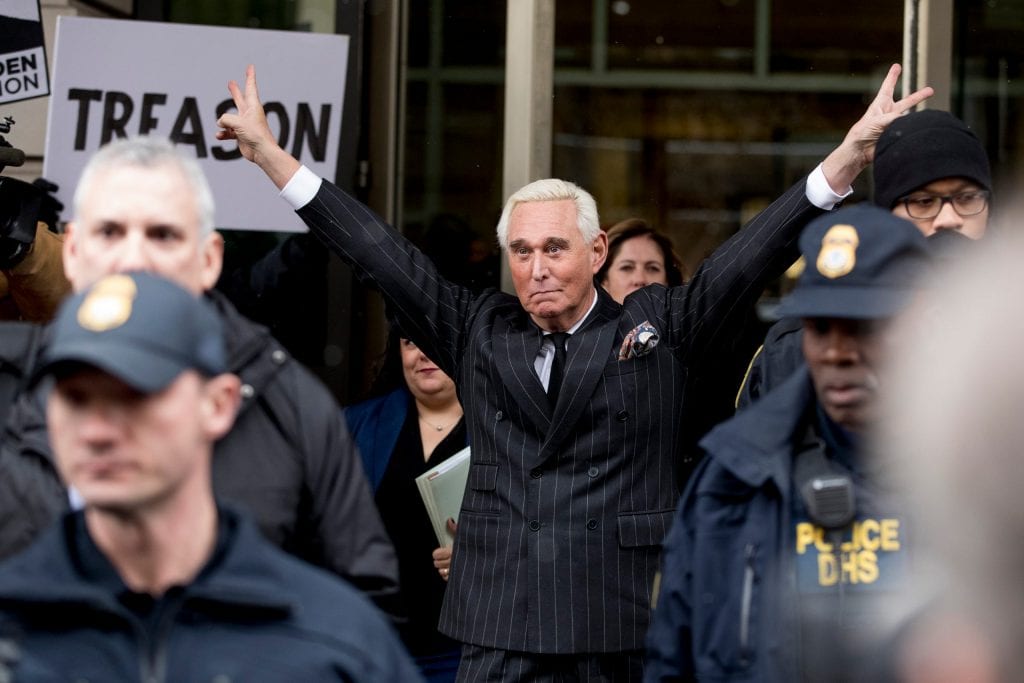 I just stepped out of the court room where jury selection for Roger Stone’s trial is taking place.

The first juror to take the stand was a former senior Obama White House communications staffer whose husband is a lawyer working on national security policy for the Department of Justice and who numbers among her close friends other lawyers working in the U.S. Attorney’s office.

The judge declined to strike her from the jury pool, insisting that her claim not to have any preconceived opinions about Roger Stone was credible. Read that again.

Yup. This is what Roger is up against. And it’s merely the latest in a string of mind-boggling decisions from this judge.

Roger did nothing wrong, besides—perhaps—forgetting about an irrelevant email one time when giving evidence to Congress. He’s flamboyant, and an expert political strategist with a knack for wrongfooting Democrats, and he is facing a laundry list of alleged process crimes that have nothing to do with Russian collusion, Wikileaks collaboration or anything else of substance. It is easy to see Stone’s trial as revenge for Mueller failing to pin anything on Trump.

But the real reason Stone is being punished by the left-leaning administrative state is that he refused to roll on his friend. Unlike just about everyone else who has ever worked with the President, Roger has stubbornly refused to disavow or dish dirt on Trump to save himself. This is in keeping with the character of the man I know.

It’s a sickening reality of America circa 2019 that loyalty has become a liability. A two-year investigation that has cost American taxpayers millions of dollars has produced nothing, even after Special Counsel Robert Mueller threatened to indict people, such as author Jerry Corsi, unless they cook up false testimony to put Roger Stone behind bars.

The trial is a stitch-up with what feels like a foregone conclusion. Witnesses for the government include people the government has literally just found guilty of lying, or whose testimony is highly suspect and already contradicted by the President, in writing, to the Special Counsel.

Roger denies all of the trivial and vindictive charges levelled at him and has passed two polygraphs. You might not know that because, unprecedented in the history of American jurisprudence, Roger has been gagged from discussing the case publicly and so have his friends. If you’re an acquaintance, former employee or intimate of Roger Stone’s, you’re not allowed to defend him in public, per judge Amy Berman Jackson.

Roger is being accused to lying to Congress—but he has produced thirty text messages proving the opposite. Judge Amy Berman Jackson has barred Stone’s defense team from asking why the FBI raided his home in full SWAT gear with CNN cameras rolling. (The FBI refused a freedom of information request asking for emails between the FBI and CNN.)

She has forbidden them from asking about wrongdoing on the part of the intelligence agencies that so obviously militated to take him out as part of a campaign of revenge against Donald Trump’s supporters and allies. They’re not allowed to raise questions about misconduct at the Department of Justice or about any sitting member of Congress either—even though Adam Schiff, Eric Swalwell and others broke House rules by discussing Stone’s classified testimony.

Roger Stone is looking down the barrel of a custodial sentence for the crime of not falsely testifying against Trump to save his own skin, as so many others would have done—and did, in fact, do—in his position. I am stunned and dismayed to hear that my old boss, Steve Bannon—a man I once affectionately referred to as “uncle Steve”—is appearing, no subpoena necessary, as a witness for the prosecution.

I have watched as members of the Proud Boys pro-western fraternity have been sent to jail for the crime of defending themselves against violent attacks from Antifa terrorists because they would not roll over and say what was expected of them. Now I am watching Roger face life and even death behind bars—he is 67—and still he stubbornly refuses to take the easy way out and lie about Trump to strike a deal. It is heroic, and it is also heartbreaking.

Trump has done nothing to protect his most ferocious and effective supporters from the devastating consequences of tech censorship. Not a single banned right-wing celebrity was invited to this year’s social media summit at the White House, ostensibly convened to discuss the problem. Trump won’t give interviews to any of them or discuss them by name, preferring to retreat to safe endorsements of Turning Point USA, an organization whose leadership grows increasingly out of step with Republican voters and even its own membership.

But whatever the financial and professional hardships early and loud Trump supporters have endured, they are as nothing when set against the thuggish dawn raid on Roger Stone’s home and his prosecution for alleged gotcha offenses that have nothing to do with Wikileaks or Russia.

Obama-appointed Judge Jackson has barred Roger from pointing out that he is being selectively prosecuted during his trial, which began this morning, despite evidence that James Clapper, former FBI Director James Comey, former FBI agent Peter Strozk and former deputy FBI Director Andrew McCabe all lied to Congress and despite the Mueller report affirming that multiple witnesses lied to the Special Counsel.

Jackson has also barred his lawyers from asking whether the Democratic National Committee was, in fact, hacked by the Russians. Roger says the evidence is scant, and that the government is relying on a report from a Clinton-tied firm called Crowdstrike. The FBI never bothered to inspect the servers itself. When this connection was pointed out during discovery, the government claimed they had independent verification, but refused to give the specifics, or to provide any evidence.

That’s not all. The chief prosecutor in Stone’s case is Jeannie Rhee, who not only represented the Clintons and the Clinton Foundation in the past, but also gave the maximum allowable donation to Hillary Clinton in both 2008 and 2016. Naturally, Roger Stone has been barred from raising this as a conflict of interest during the trial.

It gets even worse for Roger. This President is known for failing to reward loyalty. It is going to cost him among decent-minded voters in the next election—an election he is no longer guaranteed to win. (I don’t know about you, but something feels a bit different about these Ukraine allegations.) A good first step toward repairing this unseemly reputation would be the proactive pardon of his most indefatigable and unshakeable ally—a man who never once considered snitching on his old pal.

But will he do it? For some of us, who have watched the President throw ally after ally to the wolves, this is his ultimate test. It is the moment he can win us back and convince us he deserved our support, for all his broken electoral promises.

Do something, Mr. President. Do it now.