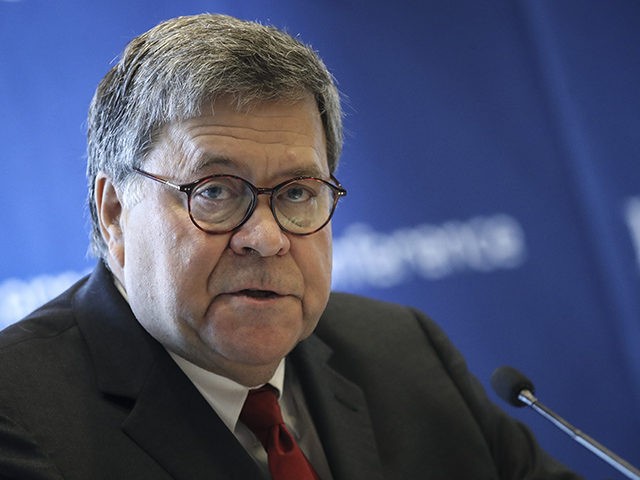 The news outlet acknowledged the U.S. Department of Justice (DOJ) would not say whether the investigation has morphed into a criminal probe.

NBC News, however, reported “Justice Department officials have said [U.S. Attorney John] Durham has found something significant and critics should be careful.”

The news outlet did not elaborate on the findings.

Referring to the expansion of the review into the origins of the Russian probe, NBC News reported, citing multiple current and former officials:

Durham has also requested to talk to CIA analysts involved in the intelligence assessment of Russia’s activities, prompting some of them to hire lawyers, according to three former CIA officials familiar with the matter. And there is tension between the CIA and the Justice Department over what classified documents Durham can examine, two people familiar with the matter said.

With Barr’s approval, Durham has expanded his staff and the timeframe under scrutiny, according to a law enforcement official directly familiar with the matter. And he is now looking into conduct past Donald Trump’s inauguration in January 2017, a Trump administration official said.

An unnamed DOJ spokeswoman reportedly said Ukraine is on a list of countries the department is examining for contributing to the Russian probe.

The spokesperson, however, refused to say whether Durham is investigating “corruption related to the DNC server” as described by White House chief of staff Mick Mulvaney on Thursday.

During the July 25 call that triggered the ongoing impeachment probe, Trump urged Ukraine to look into claims the Democratic National Committee (DNC) computer server allegedly hacked by Russian intelligence officers is actually in Ukraine. Under that potential scenario, Ukraine, not Russia, hacked the DNC in 2016.

During his October 3 deposition, former U.S. Special Envoy for Ukraine Kurt Volker told impeachment investigators it is “plausible” that “some individual Ukrainians may have attempted to influence the 2016 election or thought they could buy influence.”

On Thursday, Mulvaney described the Durham review as “an ongoing investigation by our Department of Justice into the 2016 election.”

Under former President Barack Obama, the FBI began its probe into alleged Russian election interference on behalf of the sitting commander-in-chief back in July 2016, before Donald Trump’s inauguration. The U.S. government appointed Robert Mueller as special counsel in May 2017.

Mueller concluded that the Trump campaign did not coordinate with the Kremlin’s election interference effort, sounding the death knell for the Russian collusion hoax.

Barr has charged Durham with finding out how the Russian investigation began.