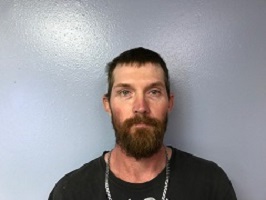 (Stillwater, Okla.) — A Lincoln County man accused of delivering methamphetamine to an informant in the parking lot of a Stillwater business has been jailed on $25,000 bail pending a Nov. 4 court appearance at which he can seek a preliminary hearing.

Due to his prior felony drug convictions, Jason Wayne Taylor, 37, of Carney, who was already on probation in two methamphetamine possession cases in Payne County, could be given a prison term of two years to life if convicted, court records show.

Stillwater Police Officer Josh Carson was contacted on Sept. 27 by a confidential informant that methamphetamine could be purchased from Taylor, who was contacted on Facebook Messenger about the alleged drug buy, according to an affidavit.

Taylor was arrested in the parking lot of a Stillwater business on N. Perkins Road at 2:30 p.m. on Sept. 27 after allegedly selling the confidential informant two grams of methamphetamine, the affidavit said.

“Jason stated he sold methamphetamine to the CI (confidential informant) for extra money,” the Stillwater officer alleged in his affidavit.

According to Payne County court records, Taylor had previously been convicted of:

* possessing methamphetamine in Stillwater in 2014 for which he was initially placed on probation on a five-year deferred sentence that he admitted violating in 2016 when he was then ordered to enroll in and successfully complete the Payne County Drug Court program from which he was terminated less than four months later, followed by being placed on six years’ probation on a suspended sentence except for serving 60 days in jail in May of this year;

* possessing methamphetamine in Stillwater in 2016 for which he was placed on a concurrent six years’ probation on a suspended sentence except for serving 60 days in jail in May of this year.