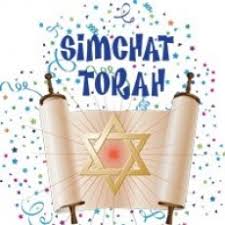 Sundown tonight, Jews, whether they know it or not, is the festival of Shemini Artzeretz. It is the final day of Sukkote . When Yeshua was a boy , living in the House of Joseph, He would go to the little synagogue in Nazareet and pray for this occasion. He’d also spend time in the Sukkah, a makeshift, grass hut, reminiscent of the domiciles the freed Hebrew slaves lived in, in the Sinai desert for the 40 years they roamed the peninsula. The holiday of Simchat Torah also begins at Sundown tonight. Yes, the Hebrews celebrate TWO holidays at once. Simchat Torah is the time when the Scrolls of the Torah are re-wound to the beginning. It is a painstakingly difficult procedure. These are “happy” holidays. In North America, Jewish children are encouraged to
participate, much as Jesus did when He was a child, to help in the prayers and events of this special holiday.

My recollection from my youth reminds me of how I did this too. Part of the festivities were the refreshments and treats we were given. As I remember we had Kosher hot dogs, apples and sweets for our effort in re-rolling the scrolls. Shemini Artzeret, like Simchat Torah are celebrated for one
day in Israel. Outside of Israel, it appears Shemini Artzeret is one day and Simchat Torah is the next day. Shimini Aertzeret is called “the eighth day”. It is the eighth day of Sukkote. It is a holiday in it’s own right, but upon reading up on it, I don’t get any special distinction as to what this holiday actually means. Never the less, it is a party, a feast. Simchat Torah is too. These are “happy” holidays and they come at the end of the “not-so-happy” holidays. The High Holy Days.

We go from Rosh Hashanah, the “ head of the year” or in Spanish “La Cabeza del Anyo.” new year actually, to Yom Kippur, the Day of Atonement. It is told to us in the Tenoch that we begin the building of the Sukkah on the night of Yom Kippur after sundown. Then, Sukkote arrives exactly two weeks from the arrival of Rosh Hashanah and lasts for 8 days culminating on Shemini Artseret. Then we begin the rolling back of the Torah to the beginning.

Jesus, as a boy did all these things. As a man He did them too. He was a devout Jew, certainly more Jewish than most of North America’s Jews are today. His Jewishness has drawn me closer to Him. When I was a young, impressionable thing, I did not know Yeshua. I had no clue. When I discovered He was Jewish, like me, I began to wonder. I began to gather information about Him. I questioned why is He omitted from my learnings in Hebrew School. When I discovered there was a passage in the Torah about Him, quoted by Isaiah some 800 years before His arrival, I wondered even more.Why is this passage, Isaiah 53, not read aloud in temple like all other scripture? Then it finally came to me. This passage describes Yeshua in detail and “we’re not supposed to learn of Him” because that’s not, well, Jewish enough. Bunk, I say. If Prophet Isaiah wrote about Him, 800 years before His
birth then I want to know all about this.

In my travels I discovered much about Yeshua and the years following His resurrection. Today when I accessed my Facebook account, a fellow named David Rosenthall wrote a piece about Yeshua and explained a lot to us that I hadn’t seen before. David is a Hebrew follower of Yeshua and a vocal activist in Broward County, Fl. He is also running for sheriff. David told me something in his Sunday Sermon, I hadn’t gotten full detail on before. Often I was told that “ the Jews could not understand Yeshua because…” they have a veil covering their eyes.”… David got me some new intel on this phenomenon. He wrote of Saul of Tarsis who “hunted” down Jewish believers in Christ Jesus. Saul, who’d later become Paul, eventually came to become a follower of Christ Jesus, himself. Saul wrote in a letter to the Roman Emperor, that “ God had blinded the Hebrews to the purpose of the Messiah and in so doing, gentiles ( non-Hebrews) could also become “chosen” by God. This “blinding” he wrote of makes perfect sense. Surely God wanted many more people to be of the “Chosen”. What better way was there than to do it like this?

Jews whom have turned to Yeshua are viewed by other Jews as no longer being Jewish. That is utter and total nonsense. No one can take away your heritage. No one human can decide what you believe yourself to be. Besides, Yeshua being a devout Jew Himself would not deny your Jewishness nor
should anyone else. There are 30,000 Jews in Israel whom have received Jesus as their Savior. Many more have outside of Israel. The time has come for the “veil” to be lifted from thine eyes. Scripture tells us this is supposed to happen, and it is happening. God’s chosen people will surely embrace the Savior upon His return. They may view it as His first arrival, but it won’t matter, for He will set everybody straight once and for all. Scripture tells us 80% of the Hebrews living on the planet will perish because they do not accept the Savior. I can see that. I can also see that I want to be in the 20% that do accept Him. Why would anyone challenge God? Why would you not believe the Messiah if in fact He has returned/arrived and God has instructed us to accept Him?

It makes no sense. The Hebrews rejected the Messiah once. God is giving them a Mulligan.Surely He will not be happy if the Hebrews blow it again. My Facebook friend David Rosenthall wrote this this morning and it says it all ….

“Yeshua was rejected by most of his people, but then gentile believers, rather than replacing the people of Israel as God’s people, became “grafted in,” as wild olive branches are grafted in to the olive tree, becoming one with God’s people. (Read Romans 11, which speaks of this at length more eloquently.) The day is fast approaching when their blindness will be removed. “

It is this exact belief that I have surmised that Christians who accept Christ and follow Him, not just pretend to do this, but really do, are “Jews 2.0” Jew-Plus. Judaism is Christianity in all candor. Christian bibles are the Jewish bible plus the New Testament. The New Testament was written by Hebrews who followed the Messiah. The other 2/3rds of Scripture IS the Hebrew “Old Testament.” All of the Prophets are Hebrews. All of Yeshua’s disciples are Hebrews, John the Baptist is a Hebrew.All of the Christians up until the year 300 AD are Hebrews. Only the conversion of the Roman Emperor Constantine to Christianity did the Hebrews become separated from those Hebrews who followed Yeshua.

The destruction of the 2nd Holy Temple in the year 70 A.D. ended the the priesthood. Without the Holy Temple and the priesthood, the animal sacrifices also came to an end. Thank God for that. With the priesthood gone, Hebrews began to separate from their Christ-following brothers. Strange it does seem, the very priests who shunned Yeshua and brought His downfall, would become extinct and with them all of the very trappings they had hoped to secure. Had they only turned to Jesus, like Joseph of Aramathea and Nicodemis did, they’d have survived the Romans and the Temple would have been preserved.

But remember, all is as God wants it to be. Blame not the priests, the Jews, the Romans for any of the misfortunes of the world. God is in control. He is the ultimate Judge. This is His candy store, we only get to play in it for a short while.

Have a blessed Sunday, a Happy Shemini Artzeret and Simchat Torah to all who observe. Never let this thought get too far from your mind, that God is there for you always. All you need do is summon Him. He awaits until your dying day for you to come to Him. He can take you places you
have only previously been able to dream of. Trust in the Lord, for His is the power, the glory and the Kingdom forever and ever.