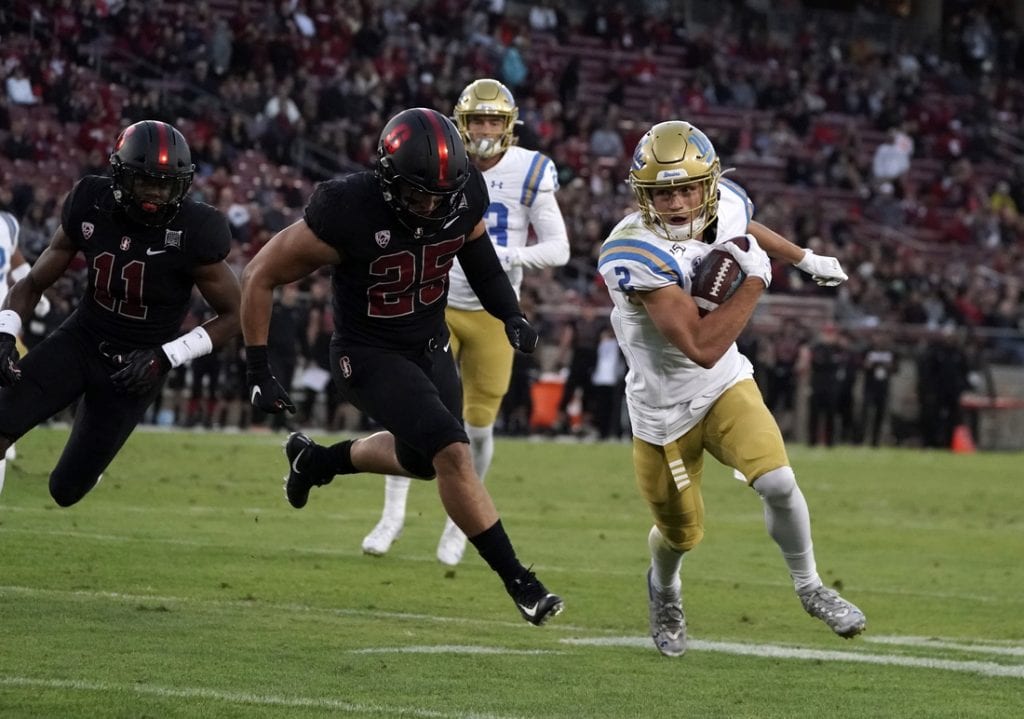 Dorian Thompson-Robinson threw for two touchdowns and ran for a third, and the UCLA defense held Stanford without an offensive touchdown for 57 minutes Thursday night, as the visiting Bruins snapped an 11-game losing streak against their Pacific-12 Conference rivals with a surprisingly easy 34-16 victory.

After Jet Toner had put the Cardinal on top with a 42-yard field goal at the end of Stanford’s first offensive possession, Thompson-Robinson marched UCLA 69 yards in nine plays for a score that gave the Bruins the upper hand for good.

Immediately demonstrating he was over the ankle injury that had kept him out of UCLA’s previous game, Thompson-Robinson threw 19 yards to Phillips for the 7-3 lead.

Less than four minutes later, the duo clicked again, this time from 3 yards to cap a five-play, 50-yard drive that produced a 14-3 lead with 4:48 left in the first quarter.

Stanford used a blocked punt by Spencer Jorgensen and recovery in the end zone by Brycen Tremayne to close the gap to 14-10 late in the first period, but UCLA rebounded to score the game’s next 20 points to pull away.

Thompson-Robinson made it 21-10 before halftime with a 1-yard TD run, Molson connected on his two field goals in the third quarter, and Kelley cashed in his long run with 6:55 to play to push the UCLA lead to 34-10.

Stanford’s Cameron Scarlett rushed from 6 yards out with 2:50 to go to cap the game’s scoring.

Thompson-Robinson went 21-for-34 for 192 yards and the two touchdowns, with one interception, for the Bruins, who outgained the Cardinal 455-198 in total yards.

Kelley was the game’s leading rusher with 176 yards on 18 carries, while Phillips reached 100 yards receiving on 10 catches.

Jack West threw for just 143 yards on 15-for-32 passing for Stanford, which had scored a total of 107 points in its previous two wins over UCLA.