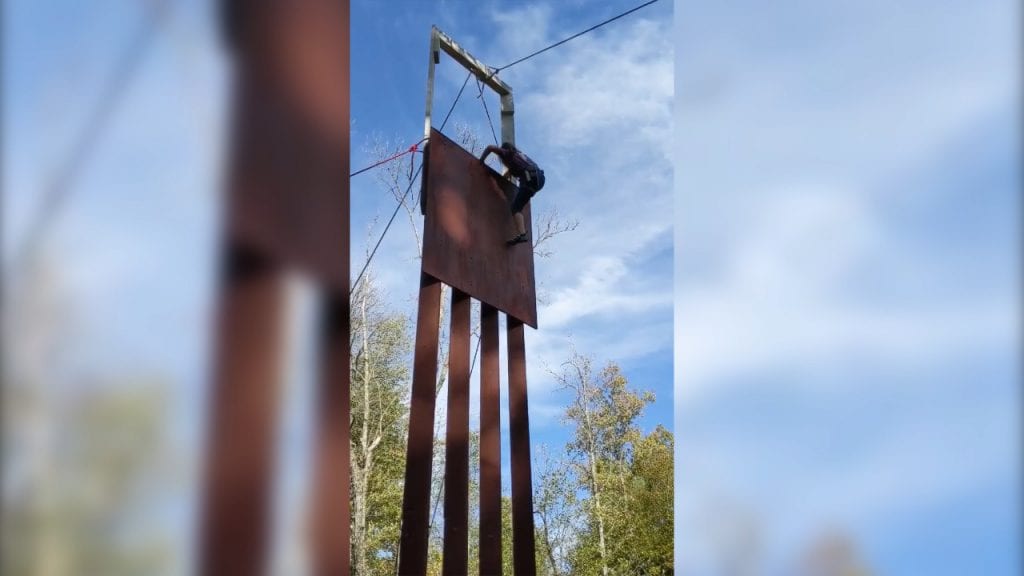 President Donald Trump told reporters in San Diego last month that the government tested wall prototypes with “20 mountain climbers” who concluded the design going up along the U.S.-Mexico border “was the one that was hardest to climb.”

Trump said the climbers invited to participate were “very good” – “some of them were champions” – and the bollard style barrier “can’t be climbed.”

“This is very, very hard,” the president said.

Lucy Hancock, an 8-year-old from Kentucky, is proving otherwise.

The girl’s mother posted a video to Facebook this week of the third-grader scaling an exact replica of the 18-foot wall going up along miles of the southern border, and it took just over a minute for the youngster to crest the structure.

“Remember that border wall replica build by Rick Weber for a competition next weekend in the Red River Gorge?” Karla Hancock posted. “We were able to help perform preliminary testing of the belay system this weekend. Lucy declared it an easy 5.7 with a tough dyno finish.”

The “belay system” Hancock referenced is a safety device climbers use to prevent a fall.

Weber, co-founder of the local Muir Valley rock climbing park, told Time he decided to construct the wall replica after watching the president boast about the “virtually impenetrable” border wall in San Diego.

Weber said he used the wall’s official dimensions and photos to replicate the structure, which he plans to debut at a “Rocktoberfest” climbing festival at Red River Gorge canyon in Kentucky this weekend.

Weber said Hancock is among a handful of folks who have already scaled the replica border wall. Erik Kloeker, an adult climber, made it over in 40 seconds, he said.

Weber, an experienced rock climber, told Time he thinks the president’s claims about mountain climbers testing the design are bogus.

“We were all very puzzled because none of use in the climbing community had heard of these 20 people that had supposedly tried this wall,” Weber said.

Weber explained that the actual border wall is being constructed at two different heights, 18-feet and 30-feet, depending on location, and he decided to build the smaller wall to limit cost.

But Weber doesn’t believe the extra 12-feet makes much of a difference, and he’s arguing the government may be wasting a lot of money on an “ineffective” barrier.

“I’m not making an argument that we shouldn’t have a secure border. I’m not doing that at all,” he told Time. “What I’m trying to do is to make sure that we’re not blowing a lot of money on some silly nonsense of putting up something that he thinks can’t be climbed. Because it can. And will be.”

Border Patrol officials have repeatedly acknowledged the new border wall will not prevent everyone from entering the country illegally, but they’ve argued it’s an effective deterrent that significantly slows illegal crossings, allowing agents more time to respond and intercept illegal immigrants, drugs, and criminals making their way into the U.S.