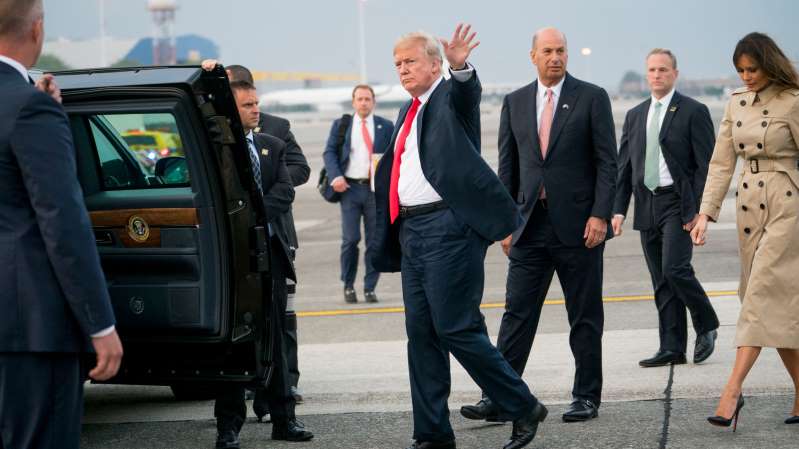 By The New York Times

The White House declared war on the House impeachment inquiry on Tuesday, announcing that it would not cooperate with what it called an illegitimate and partisan effort “to overturn the results of the 2016 election” of Donald J. Trump.

In a letter to House Democratic leaders, the White House said the inquiry violated precedent and President Trump’s due process rights in such an egregious way that neither he nor the executive branch would willingly provide testimony or documents, a daring move that sets the stage for a constitutional clash.

“Your unprecedented actions have left the president with no choice,” said the eight-page letter signed by Pat A. Cipollone, the White House counsel. “In order to fulfill his duties to the American people, the Constitution, the Executive Branch, and all future occupants of the Office of the presidency, President Trump and his administration cannot participate in your partisan and unconstitutional inquiry under these circumstances.”

The letter came hours after the White House blocked the interview of a key witness, Gordon D. Sondland, the United States ambassador to the European Union, just hours before he was to appear on Capitol Hill.

Mr. Trump, defiant as investigators dig further into his efforts to pressure Ukraine to find dirt on his political rivals, ridiculed the inquiry as spurious, signaling even before the release of the top White House lawyer’s letter that he planned to stonewall Congress, an act that could itself build the case for charging him in an impeachment proceeding with obstruction.

“I would love to send Ambassador Sondland, a really good man and great American, to testify,” Mr. Trump wrote on Twitter Tuesday morning around the time Mr. Sondland was to appear, “but unfortunately he would be testifying before a totally compromised kangaroo court, where Republican’s rights have been taken away.”

Earlier on Tuesday, House Democrats said they would regard the president’s stance as obstruction. Representative Adam B. Schiff, Democrat of California and chairman of the House Intelligence Committee, said the administration’s refusal to allow Mr. Sondland to appear was “strong evidence” of “obstruction of the constitutional functions of Congress, a coequal branch of government.”

Mr. Schiff told reporters that the State Department was also withholding text messages Mr. Sondland had sent on a private device that were “deeply relevant” to the inquiry. He later indicated the House would issue a subpoena for his testimony and the messages.

“The American people have the right to know if the president is acting in their interests, in the nation’s interests with an eye toward our national security, and not in his narrow personal, political interests,” Mr. Schiff told reporters. “By preventing us from hearing from this witness and obtaining these documents, the president and secretary of state are taking actions that prevent us from getting the facts needed to protect the nation’s security.”

The decision to block Mr. Sondland from being interviewed was delivered at the last minute, after the ambassador had already flown to Washington from Europe, and lawmakers had returned from a two-week recess to observe the questioning.

Trump administration lawyers and aides have spent days puzzling over how to respond to the impeachment inquiry, and the abrupt move suggested that the president’s team has calculated that he is better off risking the House’s ire — and even an impeachment article focused on the obstruction — than setting a precedent for cooperation with an investigation they have strenuously argued is illegitimate.

The strategy, if it holds, carries substantial risk to the White House. Privately, some Republicans had urged the White House to allow witnesses like Mr. Sondland to appear, in order to deflate Democratic accusations of a cover-up and offer a public rationale for the president’s actions toward Ukraine. Now, some Republicans worry, Democrats have more fodder to argue publicly that Mr. Trump has something to hide.

Mr. Schiff said the Intelligence Committee, working with both the Foreign Affairs and the Oversight and Reform panels, would continue its work regardless. But beyond issuing a subpoena for Mr. Sondland, the chairman did not detail how he might seek to crank up pressure on the White House to comply, and the standoff may create a quandary for Democrats who had hoped to move quickly in extracting crucial evidence and decide in short order whether to push forward on impeaching Mr. Trump.

Speaker Nancy Pelosi said it was too early to know whether Democrats might draft an article of impeachment based on the obstruction issue, akin to one adopted by the House Judiciary Committee in the 1970s impeachment proceedings against Richard M. Nixon.

“The president is obstructing Congress from getting the facts that we need,” Ms. Pelosi told reporters in Seattle, where she was holding an unrelated event. “It is an abuse of power for him to act in this way.”

Mr. Sondland has become enmeshed in the burgeoning saga of how the president sought to push the Ukrainians to investigate former Vice President Joseph R. Biden Jr., his son and Democrats. Although Ukraine is not in the European Union, Mr. Trump instructed Mr. Sondland — a wealthy hotelier and contributor to his campaign — to take a lead in his administration’s dealings with the country.