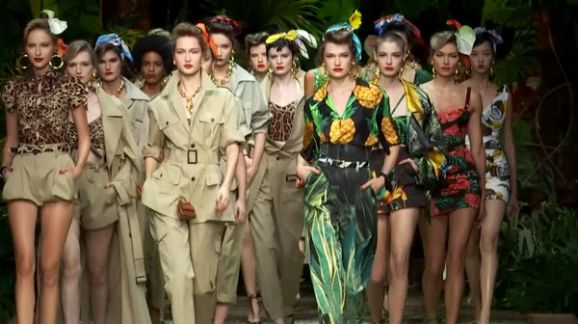 MILAN (Reuters) – With lush greenery for a backdrop, Italian fashion house Dolce & Gabbana took fashionistas on a jungle trek at its catwalk show on Sunday, presenting a spring wardrobe inspired by colorful tropical fauna and flora.

To a thumping musical beat, models then strutted in fitted over-the-knee dresses and skirts adorned with a giraffe, zebra or parrot on the leopard-print catwalk – animals seen on plenty of the designer duo’s latest creations.

There was an array of fitted black dresses – the brand’s staple that peppered the more than 120-looks runway show. They came short, fitted, corseted, slit at the front, see-through, in lace and often worn with black stockings. Models also wore black bra tops and skirt suits.

Models sashayed in long chiffon gowns filled with mixed animal, jungle and floral prints as well as in shorter frocks.

Adding more color to the show were outfits adorned in fruit prints – plenty of pineapples on bikini tops and dresses, and watermelon or mixed fruits summer shirts.

These were sometimes mixed with polka dots in bright hues.

Tropical flowers and leaves decorated dresses, skirts tied at the waist like sarongs and hotpants. There were also leaf-print trouser suits and coats.

In softer tones, the designers presented a selection of cream and gold skirts, bustier tops and dresses in macramé and raffia. They put tassels on a gold pencil skirt and vivid green jacket and dress. A selection of trouser suits were shiny and mid-calf length.

Models wore tropical flowers or knotted scarves in their hair while footwear came in all types – platform sandals, sparkling stilettos and shiny flats, sometimes with animal prints. Some sandals had leaf straps. Sunglasses were doubled – one pair quirkily sitting on top of another.

Milan is the third leg of the month-long Spring/Summer 2020 womenswear catwalk calendar that began in New York and also includes London and Paris.

The Milan shows end on Monday, with fashionistas then heading for the French capital.

Violence erupts at L.A., N.Y. protests after Trump vows to bring in military