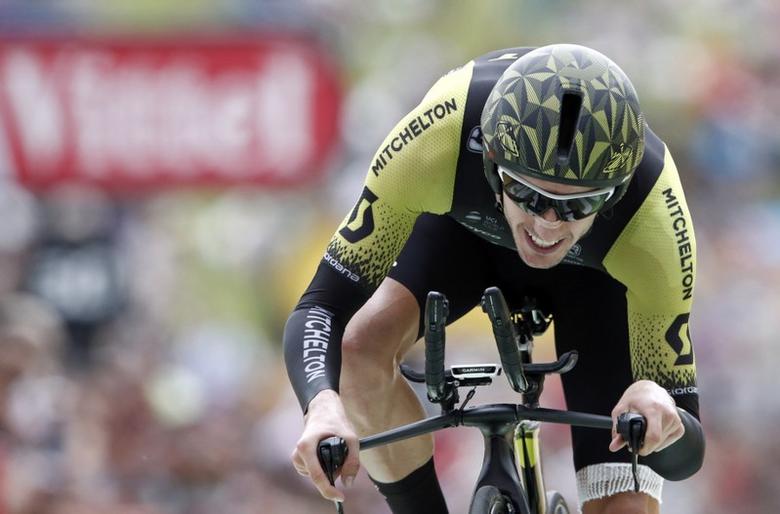 The Deceuninck-QuickStep rider edged out Bennett by a matter of millimeters in the flat finale to the 175 km ride along Spain’s east coast from Cullera to El Puig to earn his first ever victory at a Grand Tour.

The stage, which contained only one classified climb and had a 20km flat finish, was one of the more straightforward routes of this year’s Vuelta and was always going to favor the sprinters.

Bennett, who picked up a fourth Grand Tour stage win the previous day — his first at the Vuelta — looked to be on course for a stunning repeat victory but his decision to take a right turn rather than left at a roundabout as the final kilometer approached saw him lose valuable time.

The Irishman recovered superbly in the last stretch of the stage but narrowly failed to unseat Jakobsen.

Bennett’s compatriot Roche holds a two-second lead in the general classification over second-placed Nairo Quintana while Rigoberto Uran is third, still eight seconds behind Roche despite being involved in a minor crash on Tuesday.

The Vuelta lost another high-profile name earlier in the day when Dutchman Steven Kruijswijk of Jumbo-Visma withdrew from the race with a sore knee which had become aggravated since being involved in a crash in the opening team time trial.

Wednesday’s stage five is a 170km hilly ride from L’Eliana to Alto de Javalembre containing three classified climbs and is the first of eight summit finishes at this year’s race.

END_OF_DOCUMENT_TOKEN_TO_BE_REPLACED

Prosecutors have asked a judge to schedule a Friday court appearance in New York for Ghislaine Maxwell, the former girlfriend and longtime associate of the …