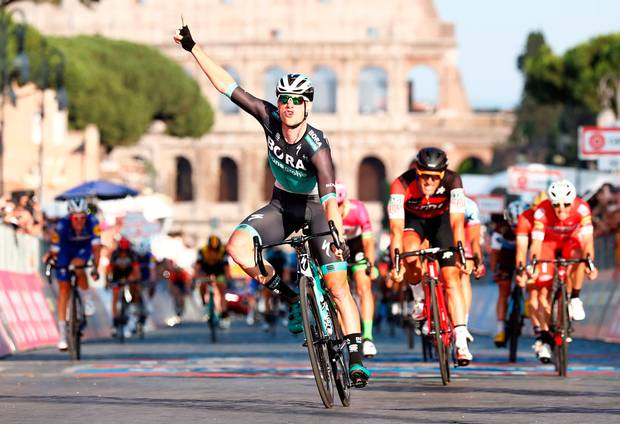 MADRID (Reuters) – Bora-Hansgrohe’s Sam Bennett claimed a maiden Vuelta a Espana stage victory as he pipped rival Edward Theuns to the line in a sprint finish to win stage three of the race, a 188km flat ride from Ibi to Alicante.

The Irish national champion, who surged ahead of his fellow sprinters on the finishing straight, now has four Grand Tour stage victories and celebrated a famous double for Ireland after race leader Nicolas Roche retained the red jersey. He is the sixth Irishman to win a stage at the Vuelta and the first since Roche in 2015.

“I can’t tell you how relieved I am,” said Bennett, who admitted he was suffering in the intense August heat.

“I can’t tell you how bad my legs were in the stage. Thanks to the team today I could relax and follow them, trust them to get me in the right place at the right time. If it wasn’t for the team effort today I definitely wouldn’t have got it.

This stage had been earmarked by sprinters as one of the few opportunities they would have to showcase their talents in a race containing nine summit finishes.

There was, however, a notable absentee in the final showdown as Fernando Gaviria, one of the stage favorites, finished over four minutes down on Bennett after being dropped on the final climb – the Puerto de Tibi – with just over 30-km to go.

Roche finished in the main peloton and retained a two-second advantage over nearest rival Nairo Quintana. He has eight seconds on third-placed Rigoberto Uran.

Tuesday’s stage four represents another chance for the sprinters on a 177km flat stage from Cullera to El Puig before the race moves to the mountains and the general classification contenders should come to the fore.

END_OF_DOCUMENT_TOKEN_TO_BE_REPLACED

Trump says U.S. schools must reopen in fall amid pandemic

President Donald Trump said on Monday that U.S. schools must open in the fall – a decision over which he has limited power – as …