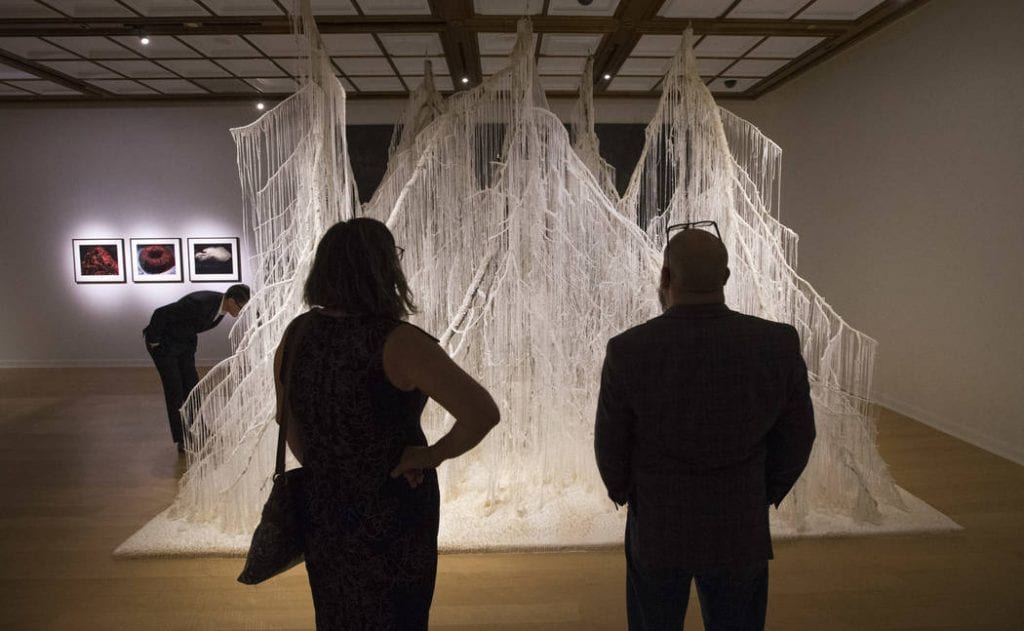 MGM Resorts continues its celebration of Japanese art, introducing renowned artist Yasuaki Onishi at Bellagio Gallery of Fine Art(BGFA) and the Artist Studio at Bellagio. On August 12, Bellagio Gallery of Fine Art will unveil Permeating Landscape, a solo exhibition by Onishi featuring two large-scale installations that reinterpret the principle elements of sculpture including mass, volume, motion and shape. In September 2019, in conjunction with his BGFA exhibit, Onishi will begin creating a new sculpture at the Artist Studio using locally sourced materials and his unique adaptation of traditional metalwork and casting techniques.

The Artist Studio at Bellagio allows guests the opportunity to observe as artists create new works. During Onishi’s residency, he will draw on the practices he learned as an art student to create a large-scale permanent sculpture that engages with nature and negative space through materiality and a process he calls “casting the invisible.” Utilizing a locally sourced tree as the foundation of his sculpture, Onishi will build a steel exoskeleton around the tree’s branches using a special welding and burning process. The resulting work is strikingly bare and intentionally empty, reminding the viewer of the process of the work’s creation.

“I am suggesting systems that go beyond the human hand to trigger bodily sensations of sharing a work and a space, and I am exploring ways of knowing this world and its opposite,” says artist Yasuaki Onishi. “Using materials that tend not to retain clearly defined shapes, I create works that have significant effects on spaces. They are sculptures that do not point to any particular phenomena but leave much to be interpreted by the viewer. Handling what is ‘other than it’ allows ‘it itself’ to become clearly visible. By considering its extremities and its opposite side, and supplementing the hollows and voids with imagination, it is possible for a person to find their actual substances on the basis of sparse clues. ”

Onishi’s BGFA exhibition will remain on view through October 27 and his Artist Studio residency will end late 2019.

Yasuaki Onishi is an internationally celebrated artist working in the mediums of installation, sculpture and painting. Onishi studied sculpture at University of Tsukuba and Kyoto City University of Arts, Japan. His work has been exhibited in solo shows at institutions across Japan and abroad, such as at The Wilfrid Israel Museum in Hazorca, IL and at the Aichi Prefectural Museum in Nagoya, JP. Onishi was also included in Ways of Worldmaking in 2011 at the National Museum of Art, Osaka, JP. The artist’s work has appeared in numerous group exhibitions at institutions such as Riverside Art Museum, Beijing, CN (2019), Louisiana Museum of Modern Art, Humlebaek, DK (2018), Neues Museum, Nuremberg, DE (2017), Sharjah Art Museum, Sharjah, UAE (2016), Fukuoka Art Museum, Fukuoka, JP (2014), The State Hermitage Museum, St. Petersburg, RU (2013), Seoul Museum of Art, Seoul, KP (2009), Kyoto Cultural Museum, Kyoto, JP (2005), The Museum of Modern Art, Takasaki, JP (2003). In 2010, Yasuaki was the recipient of a United States-Japan Foundation Fellowship that included a residency at the Vermont Studio Center, as well as a grant from The Pollock-Krasner Foundation Inc., New York. Onishi is based in the Osaka prefecture and is represented by ARTCOURT Gallery.

About Bellagio Gallery of Fine Art
Located at the heart of the elegant Bellagio Resort & Casino, Bellagio Gallery of Fine Art is Las Vegas’ premier exhibition space – where great art goes on vacation. Since opening in 1998, the gallery has presented exhibitions of artworks and objects drawn from internationally acclaimed museums and private collections, including Primal Water: An Exhibition of Contemporary Japanese Art; Samurai: Armor from the Ann and Gabriel Barbier-Mueller

Collection; I Am The Greatest: Muhammad Ali; Town and Country: From Degas to Picasso; Yousuf Karsh: Icons of the 20th Century; Picasso: Creatures and Creativity; Fabergé Revealed; and Warhol Out West.

MGM Resorts Art & Culture was established in 2016 to encompass all of MGM Resorts’ collections and varied art-related initiatives and partnerships to develop a comprehensive, multifaceted arts program. Reflecting the company’s core values of inclusivity and diversity, MGM Resorts Art & Culture aims to create special, accessible experiences for all audiences. Each project thoughtfully considers the artist, the environment, and the overall experience, recognizing the power of art to evoke emotion, engage the senses, and spark conversation. Art is prevalent throughout MGM Resorts distinctive world-class brands including Bellagio, ARIA, Vdara, MGM Grand, and Delano Las Vegas; as well as MGM National Harbor outside of Washington, D.C., MGM Springfield in Massachusetts, and internationally at MGM MACAU and MGM COTAI.