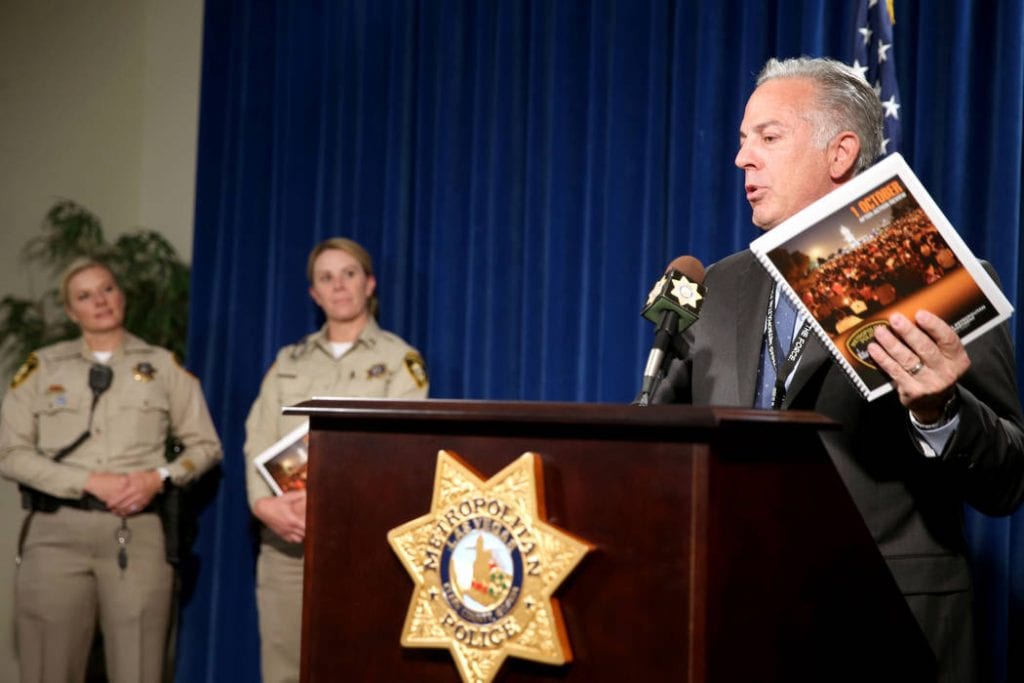 In its 158 pages, the report spells out 93 new administrative recommendations, most of which relate to how Las Vegas police should respond to any future mass-casualty incidents.

“We hope that we never have to use these procedures that we are putting in place, but we owe the public an assurance that we will always place their safety and their well-being first,” Lombardo said during a 40-minute news conference.

Lombardo started the conference by highlighting what went right.

“Regular multi-agency training exercises no doubt saved lives that night,” he said. “And communicating with our network of private security workers resulted in the lockdown of key properties on the Strip within minutes.”

Areas of critical concern outlined in the report included spotty SWAT radio service inside hotels and a training failure that left many agencies unprepared for the aftermath of the massacre, leaving them unsure of what do next.

Officers also had a hard time accessing their own rifles and trauma kits at the height of gunfire, the report notes.

The attack killed 58 concertgoers and injured hundreds more. The gunman, Stephen Paddock, opened fire on the crowd from a Mandalay Bay suite across the street before fatally shooting himself.

More than 1,500 Metro officers responded to the Oct. 1, 2017, attack, “providing plenty of coverage for the ongoing incident,” the department said in a statement Wednesday.

But the new report points to ways the department could maximize its manpower and streamline its communication in crisis.

Lombardo described the report as the department’s “textbook” on the Route 91 response and a “road map” for other agencies.

Metro Capt. Kelly McMahill said Wednesday that nearly half of the recommended changes already had been implemented. She described them as “life-saving measures.”

One of those changes included reinforcing when exactly officers should be using their radios. Officers trying to use their radios the night of the attack were denied access about 400 times during the first 15 minutes of the massacre because other officers already were speaking.

Training also was increased across the board — more rifle training, more open-air venue training and more shared training between all first responders.

Metro also committed to creating a policy for how off-duty first responders should self-deploy, since many officers rushed to the Route 91 venue from bed, or their living room couches, or different crime scenes.

The internal review also spurred the creation of a new, around-the-clock team of in-house experts to handle high-profile and large-scale incidents. That’s because the department’s Route 91 investigation was largely split in half between two units — homicide and Metro’s force-investigation team.

Since implementation, the new “major case investigative group” has been deployed at least three times, Lombardo said. He cited one example — a recent sexual assault case in the northwest valley that resulted in an arrest.

The remaining recommendations involve updating department policy and technology, which will take time and money, McMahill said. Lombardo vowed to update the public as the department makes progress.

“This was never in anybody’s thought process or paradigm,” he said of the attack.

In response to questions, Lombardo noted that all officers who had been flagged for discipline as a result of their actions during the Route 91 response had since been disciplined, including those who failed to activate their body cameras and a SWAT officer who fired a negligent, three-round burst in the gunman’s suite.

Lombardo did not provide more details on how many officers were flagged or how they were disciplined, describing the details as a personnel matter.

The Las Vegas Review-Journal previously reported that the department in March fired an officer who responded to the 31st floor of Mandalay Bay about halfway through the 10-minute shooting, then froze in a hallway for nearly five minutes.

A police union president said that he supported the officer and is fighting to get the officer’s job back.

A year ago, the Review-Journal also reported that many responding officers faced overloaded radio channels during the attack, and that inside Mandalay Bay, radio coverage was spotty and unreliable.

The internal review found that the radio system “worked as designed” but identified the need to coach officers on when to use the radio in crisis. It also described the hotel’s limited radio coverage as the department’s “biggest challenge” at the time, noting that SWAT members in a Mandalay Bay stairwell had trouble reaching their commander.

Using documents that described each officer’s actions that night, the Review-Journal in March reported that many officers felt that the department had provided insufficient rifle training, insufficient range time and insufficient protective equipment for patrol officers. Each of those concerns was addressed in the new report.

The report also described how the department has increased its mental health resources for employees.

After the attack, Metro took note of each employee’s involvement in the shooting response. In April 2018, the department launched a pilot program for a limited number of employees that alerts supervisors when officers have repeatedly been exposed to traumatic and high-stress events, including fatal car wrecks.

The internal review recommended expanding the pilot program to all Metro employees.

McMahill said the report took about 18 months to complete. Its conclusions came from interviews with about 650 officers, firefighters, coroner’s office employees and other first responders, as well as federal agents, survivors and Mandalay Bay employees.

“If you’re one of the victims of this horrific incident,” McMahill said, “if there’s any good to come out of this, it’s that — not only are police and fire and all first responders learning, but our hospitality industry’s learning, and not just here, but all around the world.”