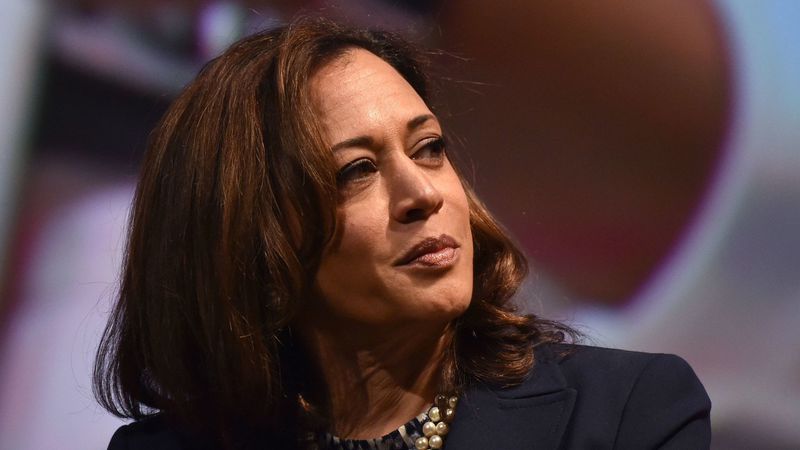 Donald Harris, a Stanford University economics professor, revealed in 2018 that his grandmother was a descendant of Hamilton Brown, the namesake of Brown’s Town in northern Jamaica.

“My roots go back, within my lifetime, to my paternal grandmother Miss Chrishy (née Christiana Brown, descendant of Hamilton Brown who is on record as plantation and slave owner and founder of Brown’s Town),” he wrote in a post for Jamaica Global.

A research archive of Jamaican records indicate that at one point in 1817, Hamilton Brown owned scores of slaves. The majority were brought in from Africa, though he also owned many Creole slaves.

Harris is among the leading contenders for the Democratic Party presidential nomination. If elected next year, she would become the first black female president — and the first Asian-American president, she has claimed, based on her mother’s Indian origins.

Senate Majority Leader Mitch McConnell, who said recently he opposes paying government reparations to the descendants of American slaves, has a family history deeply entwined in the issue: Two of his great-great-grandfathers were slave owners, U.S. census records show.

The two great-great-grandfathers, James McConnell and Richard Daley, owned a total of at least 14 slaves in Limestone County, Alabama — all but two of them female, according to the county “Slave Schedules” in the 1850 and 1860 censuses.

In his defense, McConnell noted that former President Barack Obama, the nation’s first black president, had ancestors on his mother’s side who were slave owners.
The New York Post reported that McConnell also noted that Obama also opposed reparations.

Joel B. Pollak is Senior Editor-at-Large at Breitbart News. He earned an A.B. in Social Studies and Environmental Science and Public Policy from Harvard. He is a winner of the 2018 Robert Novak Journalism Alumni Fellowship. He is also the co-author of How Trump Won: The Inside Story of a Revolution, which is available from Regnery. Follow him on Twitter at @joelpollak.

FROM The Washington Free Beacon

Sen. Kamala Harris (D., Calif.) is the descendant of an Irishman who owned a slave plantation in Jamaica, according to her father’s lengthy ancestral summary of his side of the family.

Donald Harris, a Stanford University economics professor, revealed in 2018 that his grandmother was a descendant of Hamilton Brown, the namesake of Brown’s Town in northern Jamaica.

“My roots go back, within my lifetime, to my paternal grandmother Miss Chrishy (née Christiana Brown, descendant of Hamilton Brown who is on record as plantation and slave owner and founder of Brown’s Town),” he wrote in a post for Jamaica Global.

Hamilton Brown built the town’s local Anglican Church, which is where Prof. Harris says his grandfather is buried. It is also where he himself was baptized and confirmed.

A research archive of Jamaican records indicate that at one point in 1817, Hamilton Brown owned scores of slaves. The majority were brought in from Africa, though he also owned many Creole slaves.

The Harris campaign has not commented on her father’s claims. It did not respond to a request for comment.

NBC News reported on Monday that Senate Majority Leader Mitch McConnell’s two great-great-grandfathers owned at least 14 slaves between the two of them in Alabama. The report tied McConnell’s ancestry to his position on government reparations for slavery, which he opposes.

McConnell responded to the report on Tuesday by comparing his stance to former president Barack Obama, who opposed reparations while acknowledging that some of his ancestors owned slaves.

“You know, I find myself once again in the same position as President Obama,” McConnell said. “We both oppose reparations, and we both are the descendants of slaveholders.”

Harris has yet to take a definitive position on reparations for slavery. When the California senator was asked in February whether she supports “some form of reparations for black people,” she said she did, but was unclear on how exactly it would be paid out.

“We have to be honest that people in this country do not start from the same place or have access to the same opportunities,” Harris said. “I’m serious about taking an approach that would change policies and structures and make real investments in black communities.”

A few weeks later she distanced her position from explicit payments to the descendants of slaves, saying she views policies aimed at lifting up the poor, such as her tax credit to low-income families, as reparations.

“If you look at the reality of who will benefit from certain policies, when you take into account that they are not starting on equal footing, it will directly benefit black children, black families, black homeowners because the disparities are so significant,” Harris said.

“I think that the word, the term reparations, it means different things to different people,” Harris said. “But what I mean by it is that we need to study the effects of generations of discrimination and institutional racism and determine what can be done, in terms of intervention, to correct course.”

Harris has not commented on her distant slaveowner ancestry in Jamaica. Her father earlier this year said his daughter’s ancestors would be “turning in their grave” if they heard her stereotype the island’s people as “pot-smoking joy seekers.”The