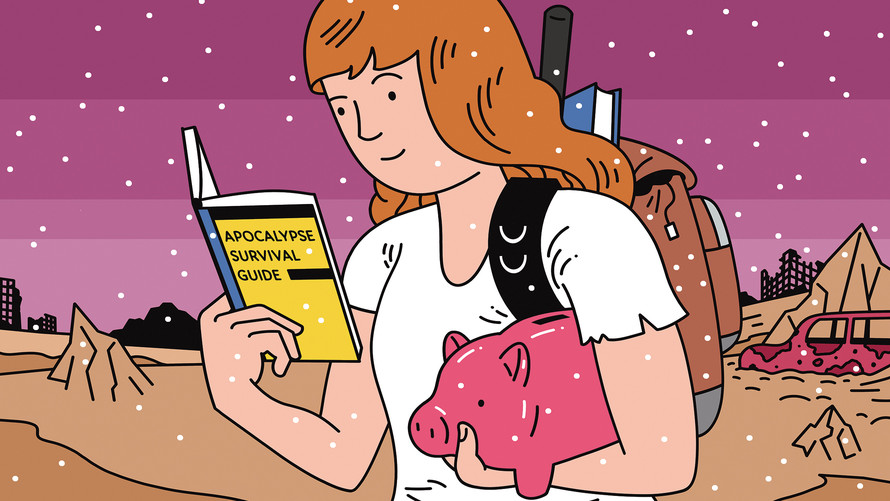 Many young people today think civilization may not exist when they’re of retirement age. Here are ways to get them to invest for the future.

Lori Rodriguez, a 27-year-old communications professional in New York City, is not saving for retirement, and it isn’t necessarily because she can’t afford to — it’s because she doesn’t expect it to matter.

Like many people her age, Rodriguez believes climate change will have catastrophic effects on our planet. Some 88% of millennials — a higher percentage than any other age group — accept that climate change is happening, and 69% say it will impact them in their lifetimes. Engulfed in a constant barrage of depressing news stories, many young people are skeptical about saving for an uncertain future.

“I want to hope for the best and plan for a future that is stable and secure, but, when I look at current events and at the world we are predicting, I do not see how things could not be chaotic in 50 years,” Rodriguez says. “The weather systems are already off, and I don’t think it’s hyperbolic to be a little apocalyptic.”

Mental-health issues affecting young adults and adolescents in the U.S. have increased significantly in the past decade, a study published in March in the Journal of Abnormal Psychology found. The number of individuals between the ages of 18 and 25 reporting symptoms of major depression increased 52% from 2005 to 2017, while older adults did not experience any increase in psychological stress at this time, and some age groups even saw decreases. Study author Jean Twenge says this may be attributed to the increased use of digital media, which has changed modes of interaction enough to impact social lives and communication. Millennials are also said to suffer from “eco-anxiety,” according to a 2018 report from the American Psychological Association, with 72% saying their emotional well-being is affected by the inevitability of climate change, compared with just 57% of people over the age of 45.

“The weather systems are already off, and I don’t think it’s hyperbolic to be a little apocalyptic.”

Meanwhile, two-thirds of millennials — defined by Pew as the generation born between 1981 and 1996 — have nothing saved for retirement, according to the National Institute on Retirement Security. The millennials who are saving had an average balance of $25,500 and were contributing 7.3% of their paychecks as of the second quarter of 2018, figures from Fidelity showed. While most millennials say they are not saving because they simply can’t afford to, for others it’s about the feeling that they may not have a future to save for, says Matt Fellowes, chief executive officer of United Income, an online retirement investment platform based in Washington, D.C.

“There is a certain fatalism in this population relative to more recent generations,” Fellowes says. “Psychologically, this population has had more shocks to expectations about their futures than past generations. From a perception point of view, I hear a lot of cynicism about the ability to build retirement savings or whether they will be able to retire at all.”

Climate change may also have direct, and devastating, effects on the finances of young people, an August 2016 study from environmental advocacy organization NextGen Climate found. The median 21-year-old college graduate in the class of 2015 will lose over $126,000 in income over her lifetime to climate-change-induced costs and $187,000 in wealth if that income were to have been saved and invested, the study, titled “The Price Tag of Being Young,” found.

From the chaos of World War II to the draft for the Vietnam War and the looming threat of nuclear conflict during the Cold War, every generation has its own source of doubt about the future, but millennials are uniquely poised to distrust systems propping up the concept of retirement, says Brad Klontz, 48, associate professor of practice at the Financial Psychology Institute. The current generation of young people witnessed the dot-com bubble burst after the turn of the millennium, the terrorist attacks of Sept. 11 and the wars that followed, and the stock-market crash in 2008 and the associated housing crisis.

“What happened in 2008 was an incredible financial flashpoint for millennials,” he says. “After watching their parents lose a job or a home, millennials are contending with a deep distrust for financial institutions and the stock market. That brings out catastrophic thinking, because they’ve already seen a catastrophe.”

Although hard data show that, in practice, many young people are still investing at a steady rate, surveys show they remain skeptical. Rodriguez says she has grown increasingly wary of capitalism and has become convinced we are witnessing its final stages. She’s not alone: The number of millennials who view capitalism positively fell from 68% in 2010 to just 45% in 2017.

“I was in college when the financial collapse happened, and I remember the intense dread and panic around me as people who played by the rules of the system and did everything right lost all of their savings,” she says. “What will prevent that from happening again? The system doesn’t work.”

But this outlook has not made her financially reckless: Rodriguez carries no credit-card debt, faithfully pays the minimum on her student loans each month and has a credit score of 750. She also keeps six months of living costs in a savings account in case of emergency.

“I hope for the best and prepare for the worst,” she says. “But I can’t imagine what my life will look like when I’m retirement age. It’s hard to plan for a future and have faith that money will mean anything anymore.”