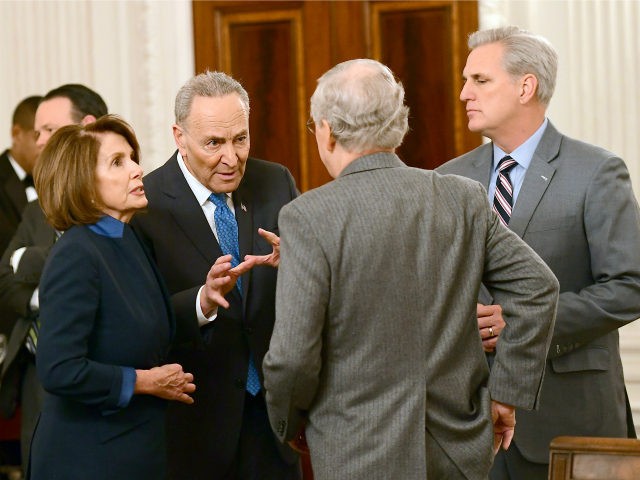 Congressional leaders will meet Tuesday to discuss raising the budget caps and the federal debt ceiling, according to a report.

President Trump reportedly agreed to begin talks regarding the budget caps after he received lobbying from both McConnell and McCarthy. The two congressional leaders contended the country could experience deep defense spending cuts without a deal increasing the spending caps. Both leaders want to avoid another government shutdown fight like the one earlier this year.

A move to raise the debt ceiling and adjust spending caps for increased defense and domestic spendings faces stiff opposition from the House Freedom Caucus and outside conservative groups.

The House Freedom Caucus released an official position that they oppose any increase in the spending caps.

“Our country is $22 trillion in debt. The deficit is slated to reach a trillion dollars in three years. The spending caps are one of the few tools left to slow down the runaway growth of the federal budget. We will oppose another deal to blow through these limits,” the Freedom Caucus said in a statement in May.

Jason Pye, FreedomWorks’ vice president of legislative affairs, released a statement in May, stating the group opposes any increase in the spending caps. Pye said:

We applaud the House Freedom Caucus for its bold position against another deal between Democratic and Republican leadership to bust the discretionary spending caps. Any spending caps deal would likely push the budget deficit for this fiscal year over $1 trillion.

Pye added, “Rather than busting the spending caps again, Republicans should be working to develop solutions to address growing entitlement programs and sending a loud message that they will cut discretionary spending.”