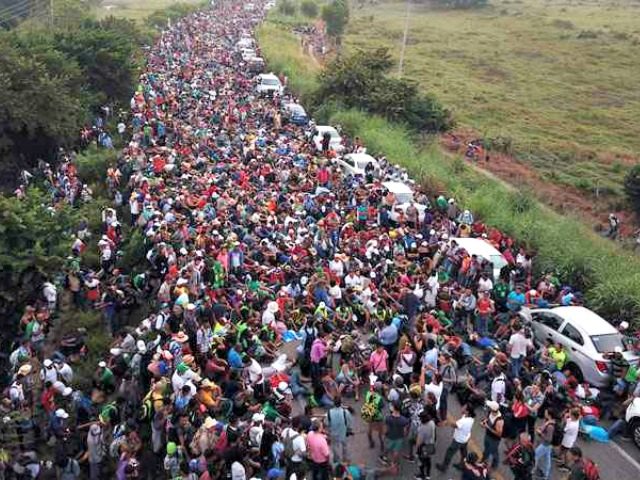 Sen. Lindsey Graham will introduce a border security bill on Wednesday and is signaling he may agree to unstated Democratic immigration priorities.

“I want to start a debate on how to fix this problem before it just swamps the border …  and I’m willing to do things that Democrats want to close these loopholes,” Graham said Sunday on Fox News.

Democratic leaders have made clear for more than two years that they want a no-strings amnesty for at least three million illegals. They have also called for changes in asylum rules to aid migrants living in Central American countries and for faster processing of asylum claims.

While offering unnamed concessions to Democrats, Graham also noted the 2020 election might force Democrats to help enforce the border laws:

We’re going to have a vote, have a hearing and vote in [the] judiciary [committee]. It will be a huge issue in 2020. President Trump is trying to fix a perfect storm of illegal immigration coming from Central America. The Democrats are going to do one of two things — work with us to find a bipartisan solution [or] ignore the problem, and if they ignore the problem, it is going to help Trump. If they work with us, it helps the whole country.

But the GOP should not offer gifts to Democrats to get them to help protect the nation’s borders, said Mark Krikorian, director of the Center for Immigration Studies. “Democrats are holding America’s border security hostage because everybody knows what the needed changes are and those measures were in the broader bill that failed last year, but the Democrats … just said ‘Drop dead,’” added Krikorian.

Graham is introducing the bill to help stop the growing migrant inflow, which has delivered 100,000 economic migrants to the border in April and May. Nearly all the migrants walk through the border fences to get jobs in the U.S. because cartel-linked coyotes and immigration lawyers have guided them through the various catch-and-release loopholes created by Congress and the courts.

If backed by some Democrats in the Senate, and by the Democratic leadership in the House, the Graham proposal would allow border officials to deny asylum to migrants who do not apply for asylum while in other countries. Graham’s bill will allow an extra 500 immigration judges to quickly process asylum claims and allow agencies to detain migrants with their children for 100 days, he said.

The 100-day detention limit would be five times longer than the “Flores” limit set by former President Barack Obama and a progressive judge in 2015. The extra time would allow officials time to process migrants’ asylum claims without releasing them and their children into the United States, Graham said.

President Donald Trump’s deputies are also drafting a regulation that will allow border agencies to hold migrants for much longer than 20 days. The detention would prevent migrants from getting the jobs they need to pay their smuggling debts to the cartels.

The border crisis is a 2020 problem for the Democrats’ Senate leader, Sen. Chuck Schumer, and for their leader in the House, House Speaker Nancy Pelosi. “They are going to get their asses kicked in November if this keeps getting worse,” said Krikorian, adding:

The Democrats are saying, ‘There is no border crisis and it is Trump’s fault.’ The GOP’s job is to show [2020] voters that this is a Pelosi-Schumer border crisis, that Schumer and Pelosi are the reasons that things are spinning out of control …  The Democrats fear the Republicans will succeed in this because the crisis is their fault. If the public broadly sees that as the case, the Democrats are in trouble and the Democrats know it.

But the Democrats’ progressive wing in the House may prevent Pelosi from doing anything to fix the problem before the election, Krikorian warned. Schumer can let a few Democratic Senators help pass a GOP bill, but “I’m not sure that Pelosi has the free of movement to do what is necessary,” he said.

Democrats have stalled their push to amnesty “Dreamer” migrants because they fear the public will oppose a giveaway to migrant criminals.

16 people are talking about this

Also, Krikorian warned that Graham has his own political balancing act. He is under pressure to provide more cheap labor migration to low wage employers in South Carolina’s tourist, meatpacking and agriculture industries and is also facing the voters in 2020.

In early 2019, Graham hired a pro-migration aide from the U.S. Chamber of Commerce.

We need more legal immigration … I don’t want green cards just for computer engineers. If you are out there working in the fields, if you are a construction worker, I want some of those people to have a way to stay here, because if you are running a business and you have a guest worker who is really good, and would add value to our country, I want them to have a chance to get a green card. I just don’t want to be a country in the future of just computer engineers or high-tech people.

In 2012, Graham launched the “Gang of Eight” amnesty, which nearly passed — but which also cost Democrats up to nine seats in the Senate. He is also a major advocate of the 1960s claim that America is for immigrants, not for Americans. For example, in 2007, as he worked with President George W. Bush to push an amnesty, and he told a pro-migration Latino advocacy group that “We’re going to tell the bigots to shut up.”

The government also prints out more than one million work permits for foreigners, tolerates about eight million illegal workers, and does not punish companies for employing the hundreds of thousands of illegal migrants who sneak across the border or overstay their legal visas.

This policy of inflating the labor supply boosts economic growth for investors because it ensures that employers do not have to compete for American workers by offering higher wages and better working conditions.

This policy of flooding the market with cheap foreign white-collar graduates and blue-collar labor shifts enormous wealth from young employees towards older investors even as it also widens wealth gaps, reduces high-tech investment, increases state and local tax burdens, and hurts children’s schools and college educations. It also pushes Americans away from high-tech careers and sidelines millions of marginalized Americans, including many who are now struggling with fentanyl addictions. The labor policy also movesbusiness investment from the heartland to the coasts, explodes rents, shrivels real estate values in the Midwest and rewards investors for creating low tech, labor-intensive workplaces.

Nancy Pelosi is promising to raise wages via gov’t socialism, but Trump’s “Hire American” immigration/labor-supply policy is nudging wages up by 3-4 percent a year. Yes, politicians competing over rival wage-raising policies would be a great thing. http://bit.ly/2Vgymzk

Jobs “are not producing the wages that people need to meet their needs,” House Speaker Nancy Pelosi said at a Washington Post event.

END_OF_DOCUMENT_TOKEN_TO_BE_REPLACED

Virginia Governor Ralph Northam, responding to protests decrying racism after the death of a black man in police custody in Minneapolis, on Thursday ordered the …